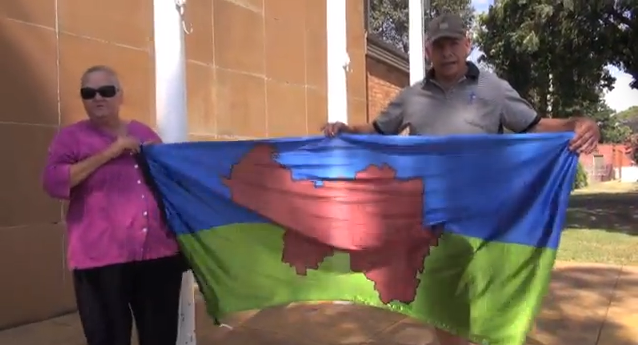 Australia is known as the continent and country with the highest concentration of micronations, those obscure whimsical independence projects enacted by eccentrics of which the government in Canberra is surprisingly tolerant.  Some have been covered in this blog, such as the Principality of Hutt River (among the most serious of them) to the Free State of Australia (see also follow-up article here) to the recent attempt by a resort island near Brisbane, Queensland, to declare itself the Independent Republic of Nguduroodistan.  Others include the Principality of Snake Hill, the Empire of Atlantium, the Principality of Dubeldeka, and, in the Great Barrier Reef, the Gay and Lesbian Kingdom of the Coral Sea Islands.  Some are no larger than the homes or properties of their self-styled princes and queens.

But over the past year the micronation craze has taken a more serious turn, as Australia’s Aboriginal people are using this template as a way to assert indigenous claims of sovereignty.  Partly it is a combination of the new, much more rightward-leaning government of Prime Minister Tony Abbott taking office in September with the occasion of Australia Day, the January 26th “celebration” of the 1788 British landing on the continent which Aboriginal people mourn as “Invasion Day.”

So on January 22nd, a group of Aboriginal people in Wellington, New South Wales, raised the flag of what they are calling the Wiradjuri Central West Republic, named for the Wiradjuri ethnic group of central N.S.W.  (See photo at the top of this article, which shows the elders Dot Stewart and Nelson Smith at the flag-raising.  See a video of the flag-raising here.)

The Wiradjuri move, as it turns out, is only the latest of four recent declarations of independence on the continent.  The others are: the Murrawarri Republic (declared on March 30, 2013, along the Queensland–N.S.W. border), the Euahlayi Peoples Republic (declared on August 3, 2013, in Dirranbandi, Queensland), and the Republic of Mbarbaram (in an inland far-northern Queensland’s Cape York Peninsula).

These declarations have been made under the rubric of an organization called the Sovereign Union of First Nations and Peoples in Australia, which was founded in 1999 and later, in 2012, reformulated itself as the Sovereign Union–Interim Unity Government at the Kuradji Tent Embassy, near Wollongong, N.S.W.  “Aboriginal Tent Embassies” are a movement which began in 1972 with a protest encampment outside Parliament House in Canberra and spawned a network of Aboriginal encampments around the country as a site of Aboriginal sovereigntist activism. 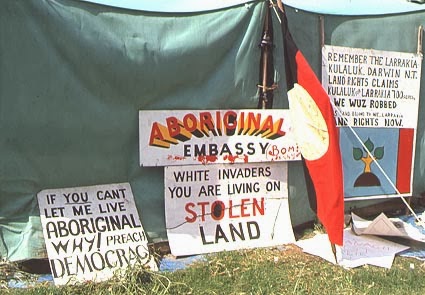 What is new about these Aboriginal declarations is that they are being made in the name of individual Aboriginal nations, as opposed to previous movements to, for example, plans by the Aboriginal Provisional Government in the 1990s to declare a vast, landlocked Aboriginal State.  Of the four above-listed nations, the Republic of Mbarbaram and the Wiradjuri Central West Republic have not, to my knowledge, revealed their precise territories, though the Wiradjuri republic’s flag features the outline of the territory, which seems to be—and this is supported by the republic’s full name—a subset of the vast homeland of the Wiradjuri people, which is the largest in Australia and includes up to a third of N.S.W., including the city of Wagga Wagga.  One news report said the republic’s territory “would cover the areas around Goolma, Wellington, Parkes, Forbes and Orange.”


Indeed, all of these new states, but the Wiradjuri republic especially, are claiming territories that also include large numbers, even majorities, of non-Aboriginals.  But Aboriginal activists insist this is not a problem, that the new states will be cooperative and inclusive.  It’s not clear if local whites necessarily share that optimism.

The Murrawarri Republic’s declaration of independence last year took the form of a letter to Queen Elizabeth II (who holds suzerainty over Australia as a Dominion Realm).  The letter requested documents within 21 days demonstrating any kind of formal cession of Murrawarri territory.  The letter stated that if no such documentation was forthcoming, then the Republic would consider itself a continuing independent state and would apply for a seat at the United Nations General Assembly.

In one sense, it is hard to see these moves as more than publicity stunts.  No one is setting up any customs booths or interfering with the exercise of Australian jurisdiction in any concrete way.  But many serious independence movements began as “publicity stunts.”  The Aboriginal activists behind these new declarations seem serious.  It is likely that more Aboriginal nations will follow suit, and that activists will take the quest for statehood to the next level.  What that next level will look is anyone’s guess.  This is a path that has not yet been blazed.