You don’t have to be a big believer in omens to feel that this one bodes particularly ill.  Yesterday in Rome, Pope Francis released doves at the Vatican to express prayers for the future of Ukraine and the Ukrainian people. 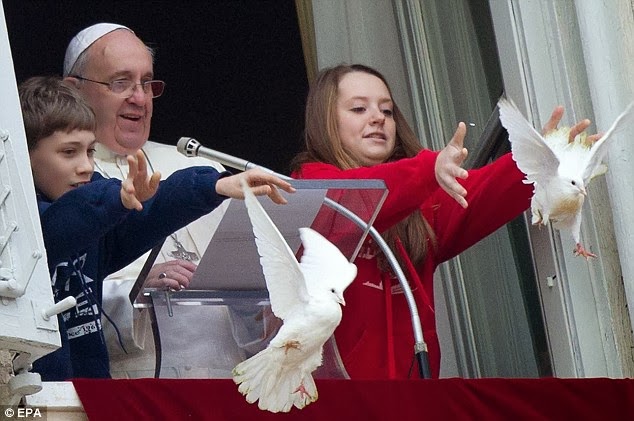 Immediately, a seagull and a crow set upon the defenseless doves and an airborne battle ensued, with feathers flying. 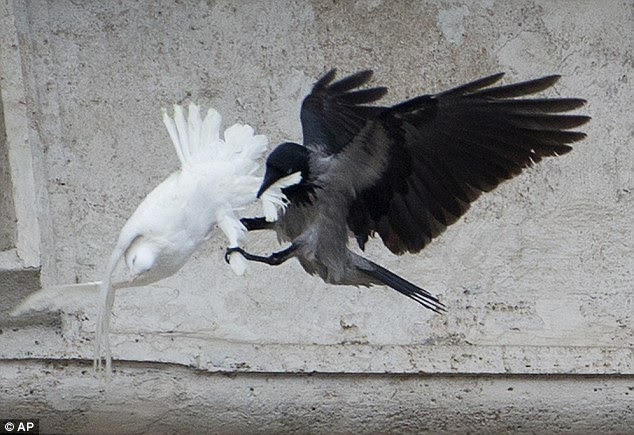 The doves remain unaccounted for.

Indeed, prayers may be a little late at this point.  The protests in Ukraine over the direction of the country are beginning to take on some of the qualities of a civil war as ordinary Ukrainians rise up against the corrupt presidency of Viktor Yanukovych, who wants to bind his country closer to an increasingly isolated and authoritarian Russia instead of to the European Union and NATO.  Most of the ethnic Ukrainian majority favor a shift to the west and to democracy and an open society, while Yanukovych, who squeaked into office four years ago on the strength of votes from ethnic-Russians in the east and south of the country, is taking the opposite tack: cosying to Vladimir Putin and keeping the opposition leader and former prime minister, Yulia Tymoshenko, behind bars on trumped-up charges.  Rapidly over the past few weeks, pro- and anti-Yanukovych riots have spread across the country, with a climbing number of fatalities at the hands of police and a sharpening geographic and ethnic divide.  Talks between the two sides have gone nowhere.  (See my recent article listing the Ukrainian divide as one of “10 Separatist Movements to Watch in 2014.”)

Initially, protests were concentrated in ethnic-Ukrainian-dominated areas, but then pro-Yanukovych counter-demonstrations in the past couple days began emerging, and in the past day or so anti-government protests have spread to places dominated by ethnic Russians, such as Odessa in the far southwest and cities in the eastern Donbas region such as Zaporizhia and Dnipropetrovsk.  The latter, though now ethnic-Russian-dominated, is Tymoshenko’s place of birth.  Tymoshenko is ethnically Ukrainian, but Yanukovych, who was born to the east, near Donetsk, is of Russian, Polish, and Belarussian ancestry.

As reported the other day in this blog, the Crimean peninsula is where many battle lines are being drawn.  One of the most heavily-ethnic-Russian parts of the country, Crimea was part of Russia rather than Ukraine when both were part of Josef Stalin’s Soviet Union.  Nikita Khrushchev transferred the peninsula to the Ukrainian S.S.R. in 1954, though when he allowed hundreds of thousands of ethnic minorities deported eastward by Stalin to return home, the predominantly-Muslim Crimean Tatars were not on the list.  When Communism fell in 1991, Crimean Russians threatened to secede and got their own autonomous republic in the peninsula, and Tatars, who had been trickling back but are still a 12% minority there, also were granted their own largely symbolic Mejlis, or Council, as the voice of their people in Crimea.  In recent days, the Mejlis has come out strongly in favor of the anti-government demonstrators, while the Crimean autonomous parliament, which is controlled by Yanukovych’s Party of Regions, hinted that Crimean Russians would not consent to remain in a country ruled by Yanukovych’s mostly ethnic-Ukrainian opponents. 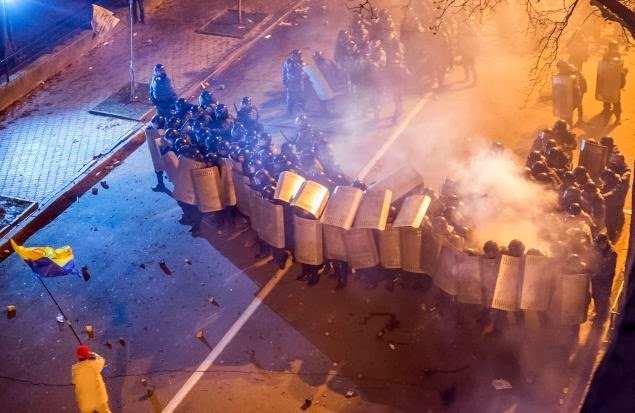 The prime minister of Poland, another of Russia’s formerly captive nations which today borders the ethnic-Ukrainian-dominated parts of Ukraine, predicted darkly on January 24th that Ukraine might even split apart.  “We have no doubt,” said the prime minister, Donald Tusk, “that the administration of President Yanukovych and his behavior have led to this critical moment, when the unity of the Ukrainian state is in question.”  And, indeed, the borders of a future partitioned Ukraine may be appearing, emerging beyond mere hints and spreading beyond Crimea. 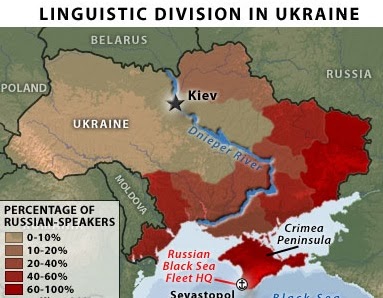 Media reported January 26th on a large angry meeting held in Sevastopol, the largest city on the Crimean peninsula, to discuss secession.  Sevastopol, which is the only part of the peninsula not in the Autonomous Republic of Crimea but administered separately within Ukraine, is also home to Russia’s Black Sea Fleet, as part of a deal negotiated after the Soviet Union’s collapse.  At this weekend’s Sevastopol conclave, which brought together Russian nationalists, pro-Moscow Cossacks, youth groups, and especially the sports-club fans who have featured prominently in the pro-government protests, a “Coordinating Committee” (Севастопольский Координационный) was formed.  The idea is that, in case of an anti-Yanukovych coup d’état, Sevastopol should secede and declare an independent Federated States of Malorossiya (Федеративного Государства Малороссия) that would eventually include other pro-Yanukovych regions like Odessa Oblast or the Donbas as well.  Malorossiya (sometimes spelled, in English, Malorussia) means literally “Little Russia” and refers to the mainland areas north of the Crimean peninsula, i.e. Ukraine when thought of as part of the Russian Empire.  The eastern Donbas region around Donetsk and Dnipropetrovsk is sometimes called “New Russia,” or Novorossiya.  That name was also tossed around by ethnic Russians in 1992 during Crimea’s brief secession attempt.

Other pro-Yanukovych activists have drawn an explicit parallel between today’s growing geographical divide and the period of the Russian Civil War after the 1918 revolution, when for a few years what is today Ukraine was divided between an anti-Bolshevik and more progressive Ukrainian People’s Republic, with a capital at Kiev (Kyiv) (modern Ukraine’s capital), and a pro-Bolshevik Ukrainian Soviet Socialist Republic (S.S.R.), which eventually prevailed and became the Ukrainian S.S.R. that kept all of Ukraine under Kremlin control until 1991.  The Russian nationalists are now saying that the Civil War–era Ukrainian S.S.R., when Ukraine was divided, which had its capital at Kharkov (Kharkiv), was the predecessor of today’s nascent Federated State of Malorossiya (see map at top of this article).  The intent to revive a Soviet-style Russian domination of Ukraine could not be clearer.

So far this Malorossiya idea has not spread in very concrete ways beyond Crimea to the rest of Ukraine, but that appears to be only a matter of time.

Oh: and if you’re wondering if the West could ever possibly just stand by idly and just watch Russia invade and dismember Ukraine, just ask the Republic of Georgia. 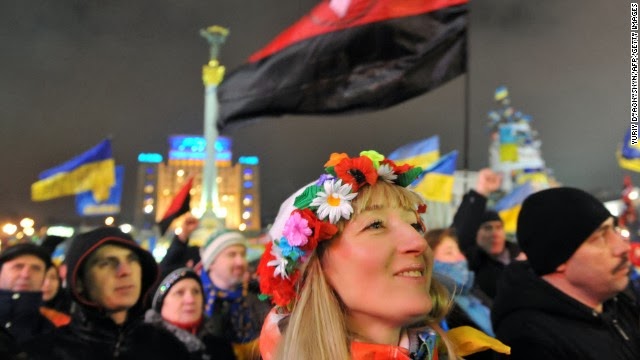 Many thanks are due to Olga Buchel for alerting me to Russian- and Ukrainian-language news items that would otherwise escape my dragnet.

[For those who are wondering, yes, this blog is tied in with a forthcoming book, a sort of encyclopedic atlas to be published by Auslander and Fox under the title Let’s Split! A Complete Guide to Separatist Movements, Independence Struggles, Breakaway Republics, Rebel Provinces, Pseudostates, Puppet States, Tribal Fiefdoms, Micronations, and Do-It-Yourself Countries, from Chiapas to Chechnya and Tibet to Texas.  Look for it some time in 2014.  I will be keeping readers posted of further publication news.]
Posted by Chris Roth at 8:53 AM