Northern Californian Voters Torn between “State” or “Republic” of Jefferson

There is a new wrinkle in the heavily Tea-Party-inflected, right-wing “State of Jefferson” secession movement in northern California and southern Oregon, which this blog has been watching closely (see related articles here, here, here, here, here, here, and in my annual survey of “10 Separatist Movements to Watch” for 2014).  The board of supervisors of Siskiyou County, California, certified on January 14th that enough signatures have been gathered for a further proposal beyond the statehood measure already destined for this June’s ballot (statehood, that is, for Siskiyou and whichever other counties might wish to join; Tehama County, to be the south, will also be putting it to voters this year).  A second proposal will now be offered, allowing Siskiyouans to vote on another measure providing for a “Republic of Jefferson.”

The media have been calling the new proposal, crafted by one Athony Intiso, the “Jefferson Republic Territory” initiative, but what appears to be the movement’s website calls it simply the Republic of Jefferson or Jefferson Republic.  Earlier, Intiso did seem to have entertained the idea of establishing Jefferson as a territory, apparently under the strange impression that the U.S. Congress would not need to approve the creation of a territory as it would a state.  (Currently there are four organized U.S. territories: Guam, the U.S. Virgin Islands, and two commonwealth territories: Puerto Rico and the North Mariana Islands.  Yes, Congress had to create them too.)  Intiso’s Jefferson Action Committee (J.A.C.) has also uploaded a document called “Constitutional Initiative Process,” which describes the idea behind the Republic.  It is vague, and at points self-contradictory, but bear with me.

The new entity called Republic of Jefferson is to remain a part of California and a part of the United States.  Its area of administration is to be coextensive with Siskiyou County, but it will not in itself be a territory and thus will not need the blessing of superordinate levels of government in order to govern.  It will not interfere with the governing functions of the U.S., the State of California, or Siskiyou County.  It will derive its mandate directly from “the people,” and “the people” will run the Republic.  In this respect, it will be in accordance with provisions for direct democracy which the Republic’s proponents regard as guaranteed by the U.S. and California constitutions; the Republic in this sense will be truer to the spirit and letter of those constitutions than the current administering entities are.  (This is where the Second Amendment, never far from the minds of Jeffersonians, enters the discussion in a major way.)  Intiso claims that it is “in the Constitution that Congress is to guarantee every state in the union a republic form of government.  It says it right in there, and they haven’t done it.  So we’re trying to get back to making Congress to guarantee that form of government.  A true representative form of government”—and here Intiso displays something typical of Tea Party activists: a wildly eccentric, uninformed, and confabulatory notion of what the word republic means.

After approval by the voters of Siskiyou County, the J.A.C. intends the Republic of Jefferson to begin carrying out its government functions, including the guaranteeing of gun rights and local control of education, promotion of the agricultural way of life and job creation through logging and mining, and also the establishment of Republic of Jefferson courts, police, and a reserve bank minting a Jeffersonian currency (commodity-backed, naturally—not like, you know, the current fake U.S. currency!). 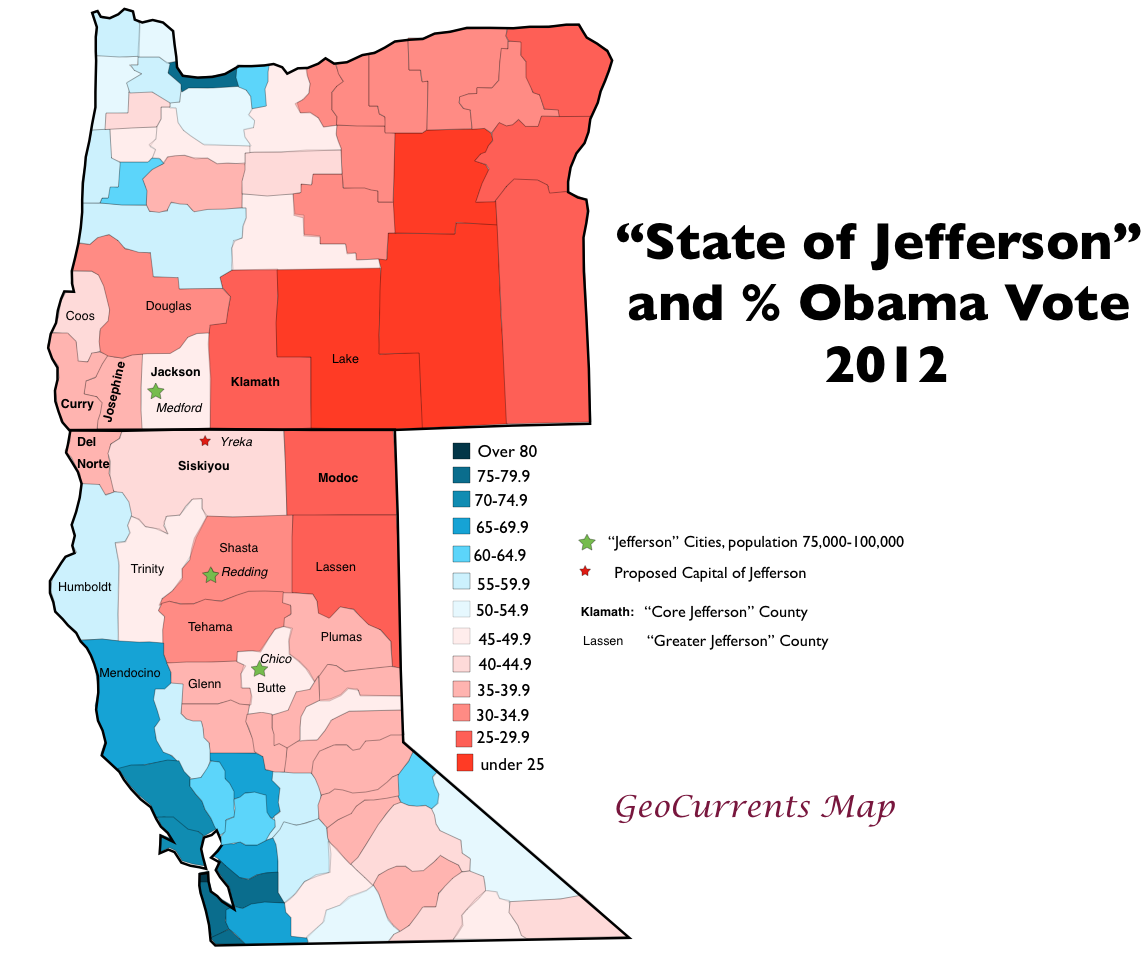 This, of course, seems to me the point at which the new entity will indeed, in fact, be interfering with the authority of federal, state, and county governments.  The J.A.C. website insists that this is not a secession or a separation, such as the 51st state envisioned by Mark Baird’s Jefferson Declaration Committee (J.D.C.), with its ballot measure.  (Intiso is treasurer of a local organization of which Baird is vice-president, the Siskiyou County Water Users Association.)  The best description for it might be the establishment of an autonomous, sovereign entity within the existing levels of government.  In fact, as I pointed out in an earlier blog post when Jeffersonians first raised this idea, it resembles nothing so much as the kind of embedded, non-state sovereignty granted to indigenous people in the U.S. and Canada—exactly the kind of “special rights” and “special treatment” that people of the Tea Party persuasion usually decry loudly when it is non-white people being treated “preferentially.”  For after all, how could a Republic of Jefferson administration govern within Siskiyou County without replacing existing governments unless some people were to come under the new Republic’s administration while some will not?  Or maybe, as is more likely, such things have not even been thought through all that well.

In any case, the June 2014 ballot will offer Siskiyou voters two choices: statehood for Jefferson or, um, this other confusing autonomy thingie.  In fact, statehood proponents are already crying foul over the Republic plan, which they claim will only confuse voters.  To my mind, however, they are mainly worried the appearance of two measures will split the crazy vote, thus ensuring defeat for both proposals. 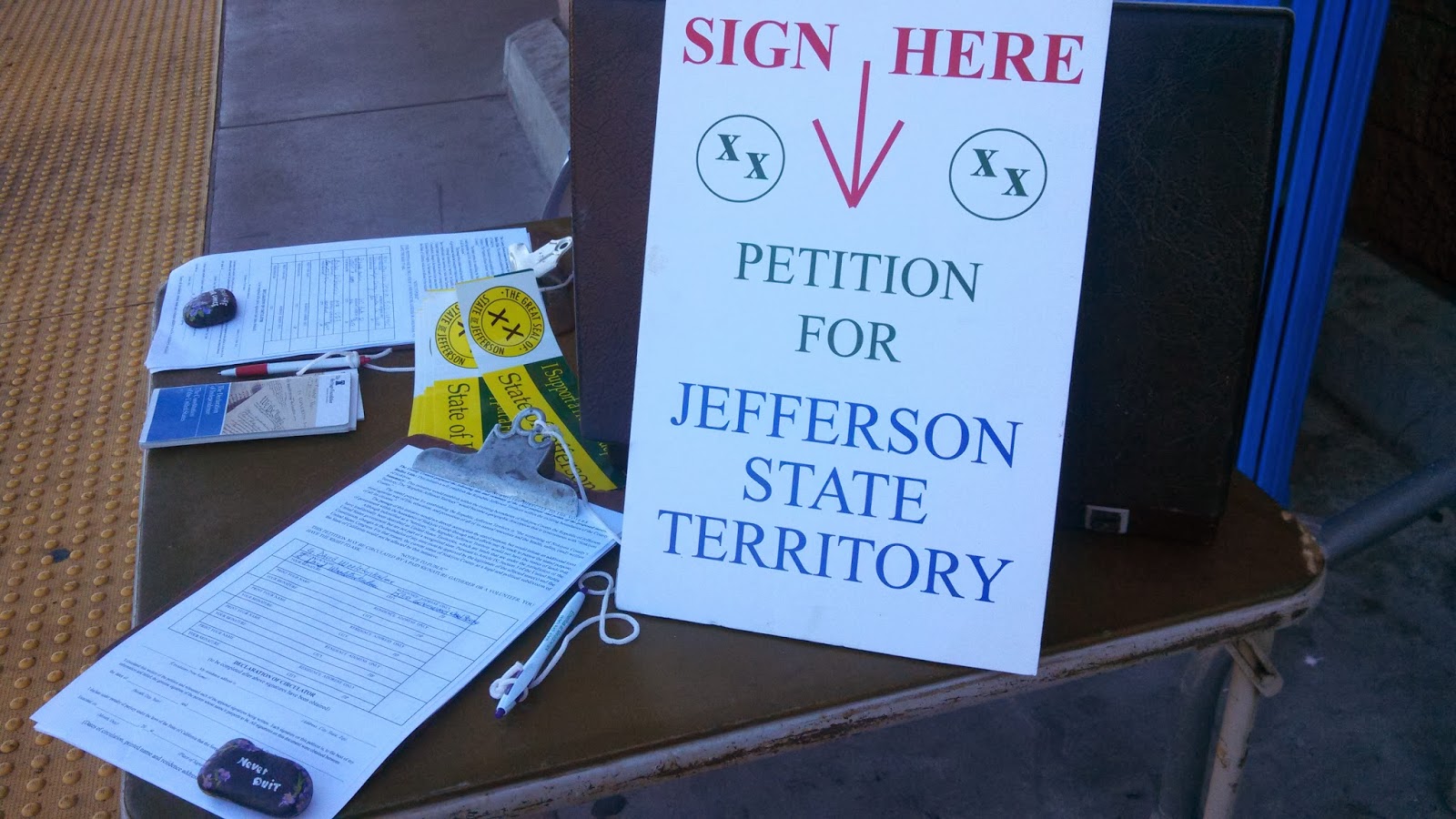 Meanwhile, an activist named Mike Rodriguez has begun gathering signatures online (among other places, at a TeaParty.org web page) for a “Declaration of Independence” of the “Free State of Jefferson,” which aims to secede from California and Oregon but not from the U.S.  Rodriguez, some digging suggests, is the Parks and Recreation Administrator for Mt. Shasta, a town in Siskiyou County, but he doesn’t mention that in his petition (after all—city parks? sounds like socialism!).  Instead, he identifies himself only as chairman of the Shasta Reform Party and the North State Reform Party—though if you search for those organizations online you will find references to them nowhere other than the online petition itself.  Rodriguez lists as Jefferson counties the original 1941 counties—Curry, Jackson, Josephine, and Klamath in Oregon, plus Siskiyou, Modoc, Del Norte, Trinity, and Lassen in California—as well as two extra California counties often included in Jefferson proposals over the years, Shasta and Humboldt.

The Jeffersonian field is getting crowded.  Will too many kooks spoil the broth?

[For those who are wondering, yes, this blog is tied in with a forthcoming book, a sort of encyclopedic atlas to be published by Auslander and Fox under the title Let’s Split! A Complete Guide to Separatist Movements, Independence Struggles, Breakaway Republics, Rebel Provinces, Pseudostates, Puppet States, Tribal Fiefdoms, Micronations, and Do-It-Yourself Countries, from Chiapas to Chechnya and Tibet to Texas.  Look for it some time in 2014.  I will be keeping readers posted of further publication news.]
Posted by Chris Roth at 9:44 AM