In the Republic of Iraq, some Kurdish members of the parliament in Baghdad would like the Iraqi national anthem to be modified in order to represent their large minority, but they are getting pushback from representatives of the Arab majority—and even from some fellow Kurds. 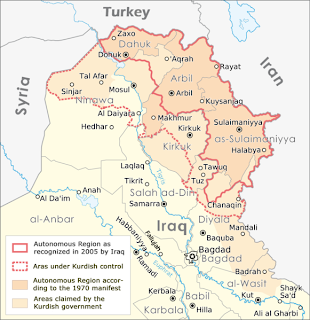 Muayad Tayyib, M.P., from the Kurdistan Democratic Party (K.D.P.), is one Kurdish legislator who would like no fewer than three verses in the currently-under-revision national anthem devoted to Iraqi Kurds.  Proposed verses include excerpts from the works of poets, including the Iraqi Kurdish versifier Fayak Bekas (How sweet and fulfilling is the water of our homeland ...) and a non-Kurdish Iraqi poet and theologian from Najaf, Muhammad Mahdi al-Jawahri, who nonetheless composed verse about Kurdistan’s “high mountains and wide plains, ... your generous people and rich history.”

Since the Iraqi state was carved out of the remnants of the Ottoman Empire by the League of Nations in 1920 (the United Kingdom then oversaw its 12-year transition to independence), the Iraqi national anthem has changed each time there has been a regime change.  But Iraqis of all stripes are now wondering if Kurds (who are 17% of the population; nearly all the rest are Arab) should be included in the anthem if, as many expect, the northern Kurdistan Autonomous Region is on its way toward eventual independence.  Could three verses be enough to convince the Kurds to stay in a perhaps looser federal union?  Or should the anthem be an apologetically Arab-nationalist one, in preparation for a smaller and more ethnically homogeneous country?

And then there is the the uncomfortable question of how many Kurds might still be in Iraq after the region secedes: after all, large Kurdish areas remain outside the reach of the Kurdistan Regional Government (K.R.G.), including vast oil resources and the ethnically mixed city of Kirkuk.  But the K.R.G. administers these areas, if loosely anyway.  Would they be taken along into an independent Kurdistan as well?  Such demographic and cartographic details (see maps above) as that will be a bigger headache down the road for the Iraqi parliament, and maybe for the Iraqi army too. 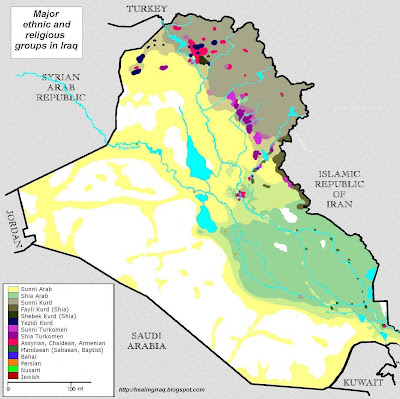 As could perhaps have been expected, Iraq’s Turkmens (3% of the population, including many in the disputed Kurdish area) and Christians (mostly Chaldeans and Assyrians, 1% of the population and shrinking) want verses too—and in their own languages.  So how about some brief mentions for the minuscule Yezidi and Zoroastrian populations?  That doesn’t seem too much to ask.

Perhaps the wisest suggestion is from Sardar Abullah, a member of parliament who thinks the national anthem should resemble that which was used under King Faisal I in the 1920s: it had no words at all.


[Also, for those who are wondering, yes, this blog is tied in with a forthcoming book, a sort of encyclopedic atlas to be published by Auslander and Fox under the title Let’s Split! A Complete Guide to Separatist Movements, Independence Struggles, Breakaway Republics, Rebel Provinces, Pseudostates, Puppet States, Tribal Fiefdoms, Micronations, and Do-It-Yourself Countries, from Chiapas to Chechnya and Tibet to Texas.  Look for it some time in 2013.  I will be keeping readers posted of further publication news.]
Posted by Chris Roth at 5:42 PM No comments: