Last week, Yuba County, in northern California, became the latest county to join the recent push to secede as a separate “State of Jefferson.”  A vote by the county’s board of supervisors on April 15th—the day of the federal tax deadline and thus an emotional day for the Tea Party anti-federal-government types that energize Jeffersonian separatism—was two to one in favor of joining the new state, with additional supervisor absent for the vote. 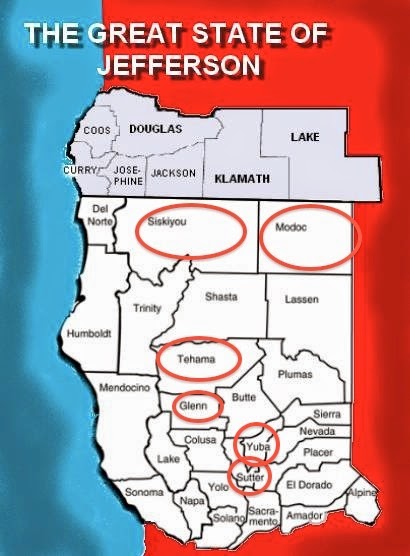 Yuba County follows Siskiyou and Modoc counties, in the far north of the state, in passing supervisory-board resolutions favoring secession.  Siskiyou’s county seat is Yreka, which was a proposed capital for the original State of Jefferson idea, in the 1940s.  Originally, it was to include counties on both sides of the Oregon–California border, but Oregon counties have been half-hearted of late.  In addition to Siskiyou and Modoc, Glenn and Tehama counties will put referendum questions about secession on the ballot in June.  Sutter County is considering the idea, and (as reported last month in this blog) each member of its board of supervisors voiced support for secession.  Sutter and Yuba are at the extreme southern end of what is generally considered the northern, rural Jefferson region; they are practically at the edge of the San Francisco–Sacramento conurbation itself.

One of the yes votes in Marysville (Yuba’s seat) on the 15th was from Supervisor Roger Abe, who said afterward, “All of the comments I have received from my constituents is to support doing this.  The only negative arguments I have heard is the belief that it won’t succeed.  If the only negative is to say that it isn’t going to happen, that’s not bad.”

Meanwhile, a different faction of Jeffersonians went on a television talk show this month to air its support for on a separate measure on the upcoming Siskiyou County ballot to create a vaguely defined parallel “Republic of Jefferson Territory” (a plan already discussed in detail in this blog).  In a roundtable taped at the College of the Siskiyous in the town of Weed, in Siskiyou County, Leo Bergeron, a Jefferson Republic proponent, explained, in the words of a local newspaper, that, under the June 3rd “Republic” referendum question, “Siskiyou County would be much like a Native American reservation, partly self-governed but still a part of the larger system, until ‘a better way’ of governance is developed.”