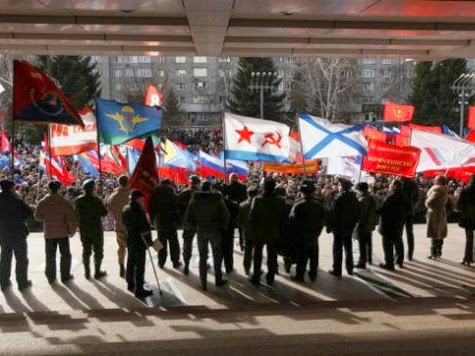 First Crimea, then, just yesterday (as reported then in this blog), Donetsk Oblast, and now Ukraine’s Kharkiv Oblast is to become a “People’s Republic of Kharkov,” if pro-Kremlin mobs that have taken over government buildings have their way in the mostly-Russian-speaking city in northeastern Ukraine, bordering Russia.

Last night (April 7th), Ukrainian police in Kharkiv were holding out against pro-Russian mobs trying to storm the oblast (i.e. provincial) government building.  (The state security service headquarters in the city were barricaded by protesters as well.)  But observers said that, after protesters lit fires in the streets, there was a parley between the protesters and the police, after which a small group of Russian-speakers were let inside.  Shortly afterward, a loudspeaker from within the building announced to a cheering crowd that a referendum would decide whether Kharkov (that is the Russian pronunciation; Ukrainians call it Kharkiv) would be a sovereign state, independent of Ukraine.  (Watch here what seems to be a YouTube clip of these events.)

This is all part of a clearly coordinated wave of street politics by Russian-speakers in Donetsk, Kharkiv, Luhansk, and even Odessa oblasts, which are the most significant ethnic-Russian-leaning cities in southern and eastern Ukraine—all of it in an attempt to bring reality to the demands of Ukraine’s recently impeached president, Viktor Yanukovych, who considers himself president-in-exile.  Yanukovych, a close Kremlin ally, still recognized by Russia’s president, Vladimir Putin, who is harboring him, wants all of Ukraine’s oblasts to do what Russian covert troops did in Crimea: organize referenda on their status within Ukraine—or rather, as Putin and Yanukovych hope, within an ever-expanding Russian Federation. 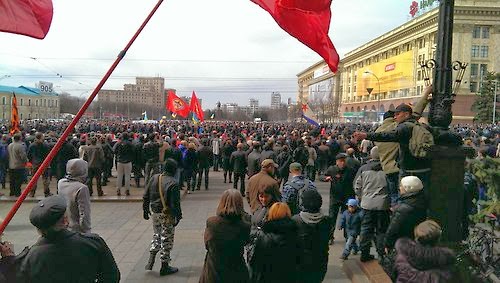 On April 7th, a similar action at the Donetsk Oblast government building in the city of Donetsk declared an independent People’s Republic of Donetsk and called for a referendum by May 11th.  There, demonstrators are also calling for the arrest of two Donetsk activists arrested last month by Ukrainian state police: Dmitry Kuzmenko, the “people’s mayor” of Donetsk, and Pavel Gubarev, the former armband-wearing militant fascist who declared the first Donetsk Republic last month and called for Russian troops to move in (as reported at the time in this blog (also in a follow-up article)). 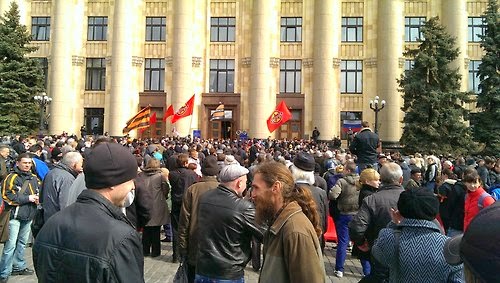 Kharkiv, Ukraine’s second-largest city, was the interim capital of what became the Ukrainian Soviet Socialist Republic as it fought to establish itself during the chaos of the Russian Civil War set off by the 1917 revolution.  Mensheviks and other anti-Moscow forces, mostly ethnically Ukrainian and culturally oriented to Central Europe, ran briefly-existing Ukrainian republics based in the western cities of Kyiv and Lviv. 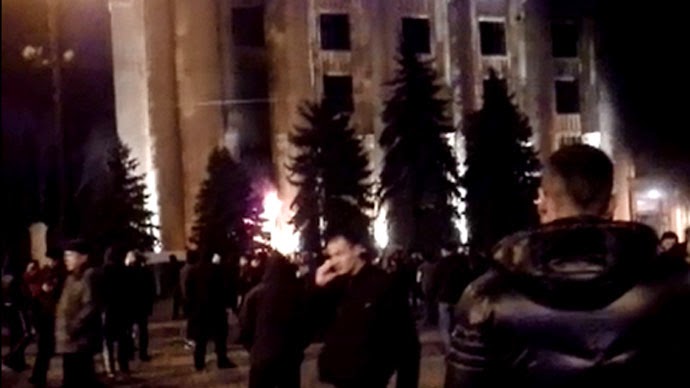 In Dnipropetrovsk, a mostly Russian-speaking city along the Dnieper River which has so far seen relatively little unrest, there is a strange rapprochement between the oblast government and the pro-Russian protesters.  The protesters have given been given offices in the main oblast administration building for “meetings and work,” in exchange for a promise not to make any “calls for separatist action.” 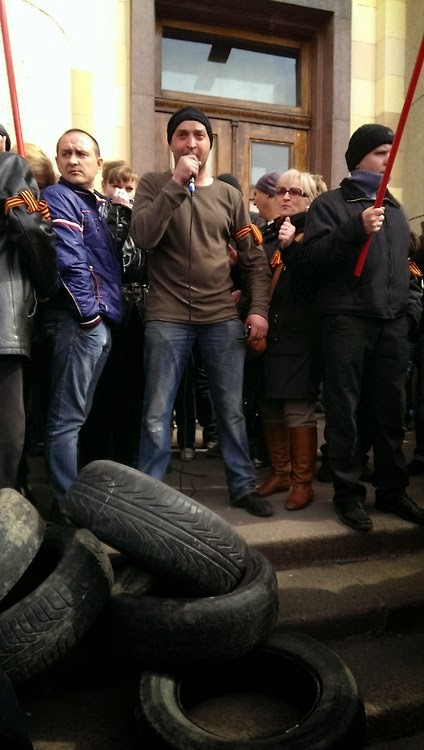 There are also ongoing demonstrations in Odessa.

[For those who are wondering, yes, this blog is tied in with a forthcoming book, a sort of encyclopedic atlas to be published by Auslander and Fox under the title Let’s Split! A Complete Guide to Separatist Movements, Independence Struggles, Breakaway Republics, Rebel Provinces, Pseudostates, Puppet States, Tribal Fiefdoms, Micronations, and Do-It-Yourself Countries, from Chiapas to Chechnya and Tibet to Texas.  Look for it some time in mid 2014.  I will be keeping readers posted of further publication news.]
Posted by Chris Roth at 11:34 AM