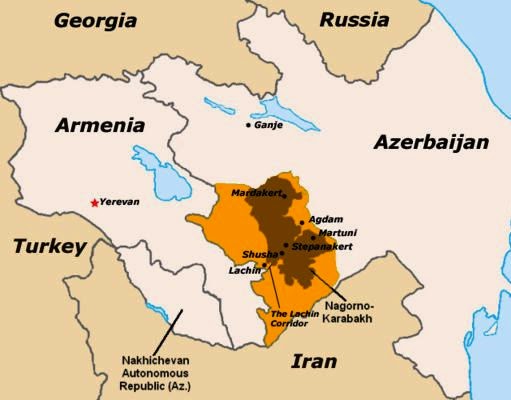 For decades, the Armenian-American political lobby in the United States has pushed aggressively to chalk up symbolic victories by pressuring state and other legislative bodies into granting utterly-nonbinding “recognition” to the independence of the Nagorno-Karabakh Republic (N.K.R.), the Armenian puppet state which the newly independent Republic of Armenia, with the help of Russia, carved out of Azerbaijan’s western flank in a bloody campaign of ethnic cleansing in the late 1980s and ’90s.  The N.K.R. has essentially no recognition in the real world of international diplomacy, except from three puppet states of the Russian Federation: Abkhazia and South Ossetia (within Georgia) and Transnistria (within Moldova).  Not even Armenia or its close ally, Russia, recognizes the N.K.R.  But the Armenian National Committee of America (A.N.C.A.) and other groups have successfully cajoled the state legislatures of Louisiana, Maine, Massachusetts, and Rhode Island, as well as the Los Angeles city council, to “recognize” the N.K.R.  (Abroad, Australia’s state of New South Wales recognizes it too.)

Some reckon that the Armenian lobby is the third most powerful immigrant-minority lobbying group in U.S. politics, exceeded in influence only by the Jewish and Cuban-American lobbies.  They have also been pushing for recognition of the Armenian genocide at the hands of Anatolian Turks a century ago as a genocide, something the U.S. has over the decades resolutely refused to do, mostly to avoid offending Turkey, a North Atlantic Treaty Organization (NATO) ally.  There are perhaps as many as a million and a half Armenian-Americans in the U.S., mostly in southern California and New England.  There are, for example, only three cities in Armenia itself that have more Armenian residents than there are in Glendale, a suburb of Los Angeles.  For legislators confronted with an N.K.R.-recognition bill, the choice is between capitulating, passing the bill, and moving on, on the one hand, or, on the other, needlessly alienating and infuriating a powerful ethnic lobby.  There is, by contrast, almost no Azeri-American community of any size to exert pressure of the same kind.

But the Armenian lobby’s winning streak, in New England at least, ended last week when Vermont’s state senate declined to wade into South Caucasus politics and recognize the N.K.R.  Vermont senators debating on the resolution were paid a visit by Yusif Babanly of the U.S. Azeris Network and a legal attaché from the Azerbaijani embassy in Washington, D.C., Mamma Talibov.  Babanly and Talibov gave the (in America, rarely heard) Azeri perspective on the Nagorno-Karabakh conflict and emphasized the strategic relationship between the U.S. and oil-rich Azerbaijan.  Azeris are closely related to the Anatolian Turks of Turkey proper, both culturally and linguistically, and Azerbaijan is a front-line state in the U.S.’s cold war with Iran.  (The Azeri lobby, which is closely linked to Turkey, is no stranger to manipulation and propaganda either.  See an article from this blog which touches on Azeri and Turkish efforts to build up the very minor 1992 “Khojaly Massacre” into a full-fledged “genocide” by Armenians.)  Mostly, the senate threw up its hands and decided the situation on the ground was too complex for the body to take a position on it.  As Norm McAllister, a Republican senator said, “We’re never going to know in this little committee who’s actually telling us the whole story.” 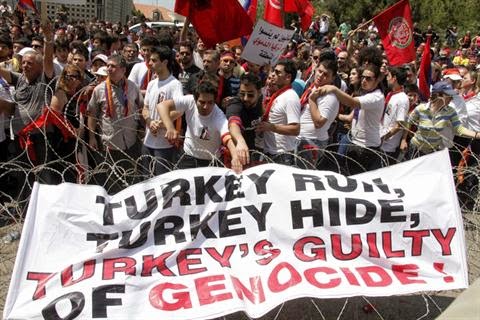 Earlier, in 2004, Vermont’s governor, James H. Douglas, officially recognized the Turkish genocide of Armenians during the First World War.  There are not a lot of Armenians in Vermont, but they include the novelist Chris Bohjalian, possibly the most prominent Armenian-American writer, who has written novels about the genocide and lives in Lincoln, Vermont.  It was Bohjalian who brought the N.K.R. recognition issue to Montpelier.

Not only that, but Armenian-Americans are on the defensive elsewhere.  They only just barely managed to scotch Azeri-initiated bills this spring in Mississippi and Tennessee on recognizing Azerbaijan’s territorial integrity—i.e., declaring the N.K.R. illegitimate.  Hawaii, South Dakota, and Wyoming also rejected pro-Azerbaijani bills in February.  Similar Azeri lobbyists to those that swayed Vermont were involved in those states’ efforts as well.

Why did Azeris manage to keep Vermont in their column—or at least out of Armenia’s—after trying and failing to do so in those other five states?  The answer may have something to do with Crimea.  Armenia was one of only eleven countries which (as discussed recently in this blog) sided with Russia and against Ukraine in a recent United Nations General Assembly vote condemning Russia’s invasion and annexation of Ukraine’s Crimean peninsula.  Others in that small club included some of the most brutal dictatorships in the world, like North Korea, Syria, and Sudan.  It is possible, in fact, as an Armenian politician recently suggested (discussed recently in this blog), that Kremlin arm-twisting brought Armenia into Russia’s new “Eurasian Union” trade bloc with Belarus and Kazakhstan, using the threat of seeing to it that Armenia would lose its grip on the N.K.R. (which many Armenian nationalists hope, and most of the rest of the world fears, could be among the next territories President Vladimir Putin is eyeing for annexation).  We may never know whether the Armenian government was bullied by Putin into backing him at the U.N. or whether it found immoral and hypocritical reasons of its own for doing so.  But Armenia’s international standing has taken a hit.  Pre-Crimea, it was a mere detail of Caucasus geopolitics that Armenia was more aligned with Russia while Georgia and Azerbaijan were more aligned with NATO and the West.  But after Crimea, it matters quite a bit.  Supporting Armenia’s foreign-policy agenda is now, in a not so indirect way, support for Putin’s new cold-war project of aggressively expanding the territories in which Russians—and allied nationalities, like Armenians—are in charge.  “Recognizing” N.K.R. is, for state legislatures today, not just taking an irrelevant position on an obscure struggle.  It’s actually siding against U.S. interests.

The Armenian lobby in the U.S. should have just stuck with the genocide question.  Their moral stance on that issue is unassailable.  Instead, they opted for mimicking the fundraising model of Jewish-American groups raising money for Israel in the early days of Israeli settlement.  In fact, the N.K.R. was largely built with money from Armenian-American donors.  But Armenia has now squandered the moral authority it enjoyed as a nation victimized by genocide.  Armenian-Americans had better climb down from their support for the N.K.R. now.  Because if Nagorno-Karabakh does become the next Crimea-type battleground in Putin’s Russo-fascist expansionist schemes, it could get very uncomfortable for them in the U.S.

Oh, and one other thing.  The chair of the Vermont senate’s Government Operations Committee, Sen. Jeanette White, told a reporter while discussing the setting aside of the N.K.R. question, “I believe that countries should be able to determine their own destiny.  However it isn’t Vermont seceding from the U.S., which we have threatened to do.  It’s complicated.”  She is reminding us that Vermont has its own independence movement, a left-wing, environmentally-oriented movement called the Second Vermont Republic (S.V.R.).  (Vermont was an independent nation before joining the U.S. in 1791.)  So if Vermont ever does become an independent state, it can just forget about getting any diplomatic recognition from Armenia.  In the South Caucasus, people have long memories.  They never forget a slight.