Maduro, off His Meds, Warns of Opposition Plot to Hand 6 Venezuelan States to U.S., Colombia for Annexation 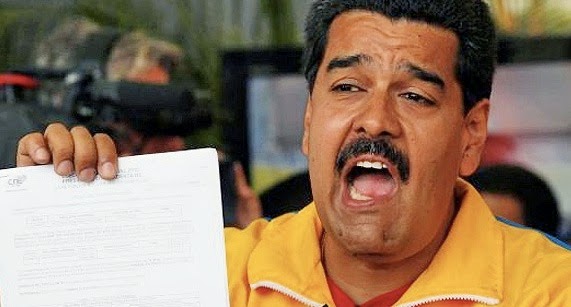 When Nicolas Maduro became president of Venezuela last year, he had big shoes to fill.  His predecessor, Hugo Chávez, was wildly popular among the poor and was well known for his charisma, his compelling oratory, and his fear-mongering conspiracy theories about the United States.  Well, Maduro isn’t quite as charismatic as Chávez was, and his speeches aren’t as colorful, and he’s certainly not as popular—in fact, Venezuela is in chaos as uprisings against his policies rage across the country—but when it comes to conspiracy theories, he has shown that he is worthy to be Chávez’s successor.

On April 3rd, Maduro, in a press conference at his presidential palace, wielded what he claimed was a high-level report from his intelligence services outlining the political opposition’s dastardly plans to foment separatism in six of Venezuela’s 23 states.  He called it part of a plan to turn Venezuelan regions over to “neo-fascists” in the mold of Chile’s former right-wing military dictator Augusto Pinochet.  And he even claimed that the ultimate goal was for some or all of these states to be annexed by neighboring Colombia and by the United States.  And Maduro knows a thing or two about annexation plots: as discussed recently in this blog, his government was one of only eleven nations to side with Russia against a United Nations resolution to condemn the annexation of Crimea.  (In this, Maduro keeps company with the likes of Belarus, Syria, Zimbabwe, and North Korea.)

“In Carabobo,” Maduro said, referring to a small state just west of the capital, Caracas, “the first autonomist meeting has already been concretized, and then the rest of the states in crisis will follow.”  He quoted a supposed secessionist leader as having said, “The only possible exit for states such as Táchira, Mérida, Carabobo, Lara, Nueva Esparta, and Zulia is secession.  I doubt that the citizens of Táchira or Mérida will say today: ‘It’s enough!  We surrender and go back to living the way we used to live!’  Given the serious circumstances in states such as Táchira and Mérida, there can be no return to the initial situation.”  There has been no independent confirmation of any aspect of this scenario, which Maduro explicitly compared to similar situations in Yugoslavia, Libya, Ukraine, and Syria—and Venezuela’s general orientation in foreign policy would imply that in these particular parallels he is sympathizing with radical Serbs, Moammar al-Qaddafi, Viktor Yanukovych, and Bashar al-Assad, respectively, rather than with the actual pro-democracy forces in those conflicts.

Maduro also claimed that he would soon reveal the identity of the “neo-fascist” “oligarch” leading the secession efforts, but that hasn’t happened yet.  The terms, of course, are cribbed directly from Putin’s propaganda playbook.

Whether the allegations have a kernel of truth or not, there is a logic to the list of states.  In last year’s presidential election, in which Chávez squeaked to victory past the Justice First party’s Henrique Capriles with only 50.6% of the vote, the states of Lara, Mérida, Nueva Esparta, Táchira, and Zulia were among the eight which went to Capriles.  (The others were Anzoátegui, Bolivar, and Capriles’s home state Miranda, of which he is governor, just east of Caracas.)  And some of those areas have, naturally, also been the scenes of some of the most dramatic uprisings against Maduro’s rule since February, in a still-ongoing wave of protests that have killed 41 people and resulted in thousands of arrests and injuries.  Most of this is the result of public anger over short-sighted populist chavista economic policies such as wanton price-fixing, which has driven Venezuela’s economy into the ditch with food shortages and out-of-control inflation.

Zulia, in particular, has (as discussed in an earlier article from this blog, on Maduro’s support for Puerto Rico’s secession from the U.S.), has been the focus of separatism in Venezuela before.  This oil-rich state, which contains 40% of Venezuela’s considerable oil wealth, was targeted in the 1920s by the Texas oil tycoon William F. Buckley, Sr. (yes, father of William F. Buckley, Jr.), who tried to foment a separatist rebellion there so he could, possibly with covert U.S. help, install a government more congenial to exploitation by U.S. firms.  There is very little indication that full-blown separatism has had much traction in Zulia since then, but during the 2000s, when there was a war of words between Chávez and President George W. Bush, Chávez made much of alleged Central Intelligence Agency (C.I.A.) separatist provocations in Zulia.  There may have been something to that, but it is equally possible that the Bush administration simply enjoyed pushing Chávez’s buttons, as when the U.S. ambassador to Venezuela (supposedly accidentally) referred to Zulia in 2005 as an independent republic.  Chávez also claimed that a 2001 joint U.S.–NATO naval exercise which used a fictitious invasion and “liberation” of Zulia as its premise was a dress rehearsal for just such an intervention, but it may have been a Pentagon in-joke more than anything else.

Maduro’s worries about annexation of territory by Colombia reflect diplomatic tensions between the two countries, which in late last decade included Colombian accusations that Chávez was covertly supporting and arming Colombia’s powerful left-wing rebel army the Revolutionary Armed Forces of Colombia (Fuerzas Armadas Revolucionarias de Colombia, or FARC).  Colombia is also involved in a dispute with Venezuela’s ally Nicaragua over San Andres, Providencia, y Santa Catalina, a territory which is administered by Colombia (validated in 2012 by the International Court of Justice, as reported at the time in this blog) and, like Venezuela’s Nueva Esparta state, is a Caribbean archipelago with cultural differences from the mainland.  (Nicaragua sides with Russia on the Crimea question as well.)

One wonders: does Maduro really think that Barack Obama—just as he is trying, through an evenly divided Congress, to pull off potentially disastrous military withdrawals from Afghanistan and Iraq, and just as he is trying to position the U.S. as a world leader with the right to lecture Vladimir Putin about the evils of territorial expansion—that just at that moment, or indeed any moment, Obama is going to decide launch an American annexation of part of Venezuela?  It is beginning to appear that Maduro may be as unhinged and out of touch as many in the political opposition claim.  Or is this fairy tale designed merely for the consumption of the Venezuelan masses, in an attempt to distract them from their economic and political grievances with a scary foreign enemy?  If so, then Maduro has even more in common with Putin than was thought. 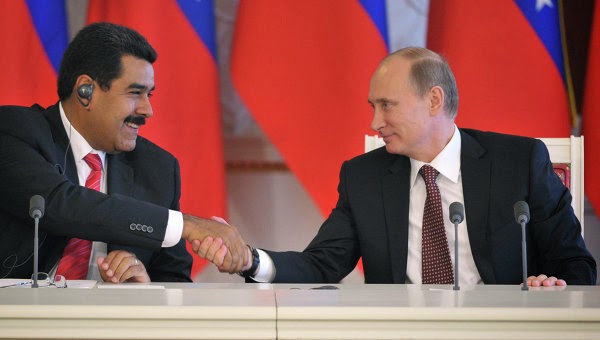 [For those who are wondering, yes, this blog is tied in with a forthcoming book, a sort of encyclopedic atlas to be published by Auslander and Fox under the title Let’s Split! A Complete Guide to Separatist Movements, Independence Struggles, Breakaway Republics, Rebel Provinces, Pseudostates, Puppet States, Tribal Fiefdoms, Micronations, and Do-It-Yourself Countries, from Chiapas to Chechnya and Tibet to Texas.  Look for it some time in mid 2014.  I will be keeping readers posted of further publication news.]
Posted by Chris Roth at 5:14 PM