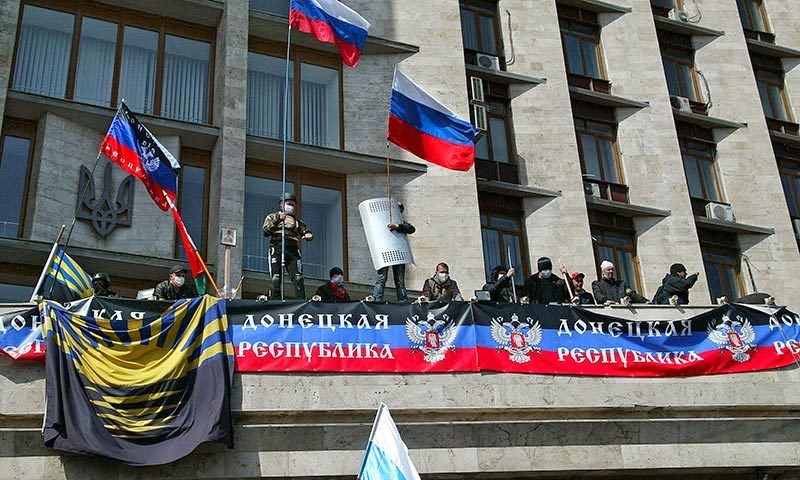 Today (April 7th) marks the second time in about a month that Ukraine’s eastern Donetsk oblast, which is dominated by Russian-speakers, has declared independence.  (The first time, in early March, shortly before Russia’s annexation of Crimea, was reported at the time in this blog.)  That time (as also reported in this blog), the ringleader, Pavel Gubarev of the Donbas People’s Militia (Donbas being the name for this border region), was arrested by Ukrainian authorities shortly after he invited Russia’s president, Vladimir Putin, to send in the military to “protect” the fledgling republic.  This time, it might not end so quickly. 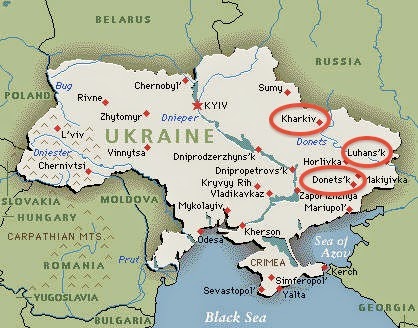 For one thing, today’s pro-Kremlin street-politics offensive is multi-pronged.  On the same day, oblast government buildings were taken over in two other capitals of eponymous Russian-speaking oblasts, Kharkiv and Luhansk, as part of a cat-and-mouse game between pro-Russian mobs (many of them clearly agents provocateurs bused in by Moscow) and pro-unity ethnic Ukrainians.  (Some Russian-speakers and ethnic Russians side against the separatists, too, but figures are hard to come by.)  The city of Kharkiv is a particularly symbolic prize because it was the capital of a pro-Bolshevik republic during the Russian Civil War, shortly after the Russian Revolution of 1917, while Ukrainian nationalists based in Lviv and Kyiv defended doomed Menshevik redoubts in what is now Ukraine’s west.  The Kharkiv republic eventually became the Ukrainian Soviet Socialist Republic within the U.S.S.R.  The latest word, however, from Ukraine’s interior ministry, is that pro-Ukrainian forces have retaken the Kharkiv government buildings.

In Donetsk, however, pro-Russian forces remain in control of the government buildings as of this writing.  An independent “Donetsk People’s Republic” has been declared (Gubarev’s rebellion called it simply “Donetsk Republic”).  A popular so-called Council of Donbas has taken control of the government buildings, as well as the state police headquarters and a power station.  A statement from the Council, addressed to the general public as well as Putin, was released, reading, in part, “The Donetsk Republic is to be created within the administrative borders of the Donetsk region.  This decision will come into effect after the referendum.  Without support it will be hard for us to stand against the junta in Kiev.  We are addressing Russian President Putin because we can only entrust our security to Russia.”  The referendum is to take place, the Council says, by May 11th. Ukrainian national elections are already scheduled for May 25th.

According to Ukraine’s ministry of the interior, the unrest in Luhansk, capital of another border oblast, included pro-Russians storming the state police headquarters over Sunday night and seizing an armory.  There were nine injuries.

Media are also reporting sporadic violence against Ukrainian soldiers by Russian ones.


The Ukrainian government is in crisis mode.  Arsen Avakov, Ukraine’s minister of the interior, has recently arrived in Kharkiv, while Vitaly Yarema, the first deputy prime minister, was en route to Donetsk, as was Yulia Tymoshenko, the anti-Kremlin opposition leader who was jailed during the tenure of Ukraine’s recently impeached pro-Kremlin president, Viktor Yanukovych.  Ukraine’s foreign minister, Andriy Deshchytsya, told Russian media today that if Russia sent the military into eastern Ukraine then the two countries would enter a state of war.

The international community has reacted swiftly. The president of the Czech Republic, Miloš Zeman, said, “If Russia decides to extend its territorial expansion to eastern Ukraine, the fun is over” and added that in such a case the North Atlantic Treaty Organization (NATO)—of which the Czechs are a member but Ukraine is not—should intervene on the ground.  The United States government is accusing the Russian government of fomenting the current unrest.

Watch this blog for further updates.