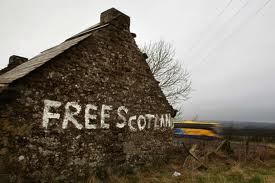 The U.K. has agreed in principle that, as with the Falklands or Gibraltar, if the majority of Scots vote for independence, then the process of secession will be set in motion.  Recently the U.K.’s prime minister, David Cameron, visited Edinburgh to meet with Alex Salmond, Scotland’s First Minister and the head of the nation’s separatist Scottish National Party, to plead for unity.  The vote is pencilled in for some time in 2014, but Cameron would like it held sooner, so as to give less time for Salmond to try to rally Scottish support for independence above the current one third or so.  Ironically, there is more support in England for Scottish independence than there is in Scotland, but the English won’t be voting on it.  (There is also a very marginal English independence movement.)  Salmond would also like the voting age for the poll to be lowered to sixteen, since separatism is more popular among the young. 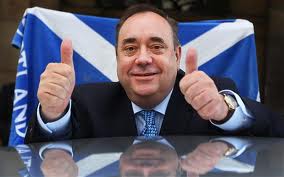 Alex Salmond
Details to be worked out before the vote include who would get which part of the British military, whether an independent Scotland would stay in the North Atlantic Treaty Organization or the European Union or both or neither (a complicated legal issue which I discussed in detail last month), and who would get all that oil in the North Sea.  Much of the U.K.’s natural-gas reserves lie off of England’s coast, but if conventions on marine boundaries are applied to a partitioned Great Britain, Scotland would get most of the oil, which is farther north in the North Sea.  This would make it, economically speaking, a very viable state indeed. 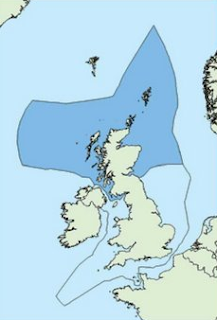 The U.K.’s marine boundaries, with an independent Scotland’s boundaries shown in dark blue
Understandably, this aspect of the independence issue has the Conservative Party and others who represent British business interests in a tizzy.  And it has prompted the right-wing Spectator magazine to muse, in a recent article, how far the principles of right to self-government enunciated by the Scottish National Party would apply if parts of Scotland itself were to vote for independence.  The article’s author, Laurance Reed, a Scottish former Conservative member of (British) Parliament (who once proposed deporting all Irish citizens out of the U.K.), asks, rhetorically, why the Orkney Islands or Shetland Islands to the north of the Scottish mainland should not seek independence from Scotland itself and take with them vast oil reserves—or even Reed’s native Hebrides islands, which are closer, off Scotland’s western coast.  Reed asks, apocalyptically, “If oil and its riches can transform the fortunes of the Scottish National Party and destabilise the United Kingdom just a few decades after its discovery, what makes us think that the people of the Hebrides will not be changed by the black stuff?  Wait until the oil price goes through the roof as the result of demand in Asia, making the exploitation of the Hatton/Rockall Basin profitable.  The Icelanders and the Faroese may soon scramble for the riches.” 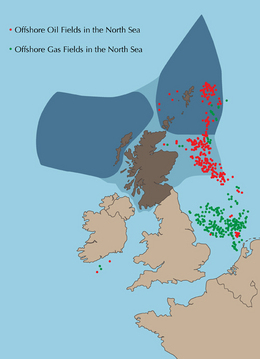 The marine boundaries of a hypothetical independent Scotland,
with the marine boundaries of a far more hypothetical
independent Shetland, Orkney, and Hebrides shown in darkest blue
In fact, there is more nascent separatism in Scotland than Reed may realize.  Some of these questions have been asked in recent years from an unlikely place, the so-called Crown Dependency of Forvik, one of many more or less frivolous micronation projects which the British Crown quietly tolerates within its boundaries.  (See my recent blog post on another British micronation, Sealand.)  Unlike others, Forvik’s cause has intersected with serious regionalist politics.  The nation was founded by Stuart “Captain Calamity” Hill, an English eccentric whose attempt to circumnavigate the British Isles in a private craft ended in 2001 when he was shipwrecked on Forewick Holm, a 2.5-acre islet in the Shetland Islands.  In 2008, after purchasing the island, he renamed it with the Norn name Forvik (Norn is the Scandinavian language spoken in the Orkneys and Shetlands until about a hundred years ago) and unilaterally declared it a Crown Dependency—like the Isle of Man and the Channel Islands—and thus not fully a part of the U.K. and not at all a part of the E.U. 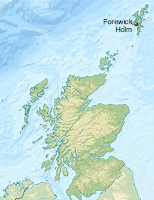 Although Hill swears allegiance to Queen Elizabeth II, his arguments include his claim that the Shetlands’ and Orkneys’ transference in 1469, when King Christian I of Denmark essentially “pawned” the archipelago to King James III of Scotland to raise money for his daughter’s dowry, is illegitimate (a legal tangle that Reed also raises).  Christian never paid up, which is why the islands remain Scottish, but what if the Danish Crown suddenly paid its bill?  Hill told one journalist, “It’s all jolly good fun.  Every pensioner should do something like this.”  Still, it is not all a lark: some of Hill’s invocations of ancient Norse law were lauded by some in the Shetland Islands Council—the archipelago’s semi-autonomous government—during a recent legal challenge to the Crown for seabed resource rights, invoking ancient Norse law.  Orcadians (as people of the Orkney Islands are known) and Shetlanders have always been fiercely independent, and have always had a streak of Viking in their culture that is not found in Edinburgh or Glasgow or even the Isle of Skye. 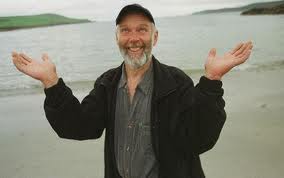 “Captain Calamity” Hill, a one-man secessionist movement that has raised deep legal issues
Jurists and statesman have already begun studying the legalities of the Acts of Union of 1706-07 which created the United Kingdom out of the kingdoms of England and Scotland.  Organizations representing culturally distinct groups within Scotland such as the Shetland and Orkney councils may see independence as the chance to claim their own, probably more limited autonomy (which tends to be the pattern, as we continue to see in the Soviet Successor States).  So far, a political party called the Orkney and Shetland Movement is demanding devolution and its own parliament, but not outright separation, and so far the S.N.P. is tolerating the O.S.M. as uneasy allies.  But, depending on how far these questions are pushed, the very basis of Scotland’s original claims over its own territory may be called into question.  Indeed, if Orcadians and Shetlandes tried to push for their own separate states—which right now they have no plan to do—then it would probably make the S.N.P. pull back.  A Scotland without much of its North Sea oil would be far less viable economically.  But if those archipelagoes became independent, then their tiny population would have a mathematical relationship to their nations’ natural-resource wealth that would make them as rich as the emirs of Dubai and Kuwait. 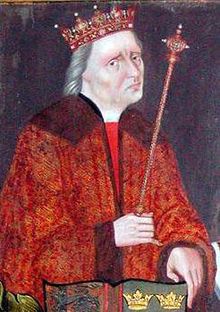 King Christian I of Denmark, who pawned the Orkneys and Shetlands
to Scotland to pay for his daughter’s marriage.
See, doesn’t it look like he regrets it already?
Scotland, it should be noted, also administers, within the United Kingdom, the tiny rocky islet called Rockall (also mentioned sarcastically in Reed’s article), about equidistant between Ireland and Iceland.  Both Dublin and Reykjavík claim Rockall—and, by extension, the vast resource-rich seas around it—while the Danish government insists it is part of their self-governing Faroe Islands territory (which itself has its own separatist movement, the inspiration for the Icelandic singer Björk’s 2008 hit “Declare Independence”). 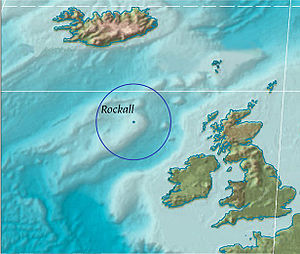 In 1972, the British parliament, which claims Rockall by right of possession, asserted the rock was not just part of Scotland but was specifically part of the Scottish county of Inverness-shire (which also, by the way, includes the Inner Hebrides).  (Rockall, though uninhabited, did have its own brush with independence, in 1997, when Greenpeace occupied the island as a publicity stunt and declared it an independent “global state” called Waveland.  It lasted only a matter of days, though the Crown made a point not to interfere.) 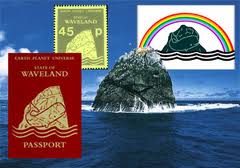 Waveland
What all of this reminds us is that the legal basis of marine and land boundaries in the North Sea and western Scandinavian region are far from settled.  Scottish independence has the capacity to reopen cans of worms like that of Rockall.  Suddenly, an independent Scotland would find itself responsible for a dormant territorial dispute with Ireland and Denmark, one which further resource exploration could reawaken.  This is to say nothing of what will happen as the Arctic Ocean continues to melt.  Already countries around the Arctic rim are positioning themselves for a race for the polar seas’ wealth of natural gas and who knows what else.  An independent Scotland would be well positioned to take part in that mad scramble as well. 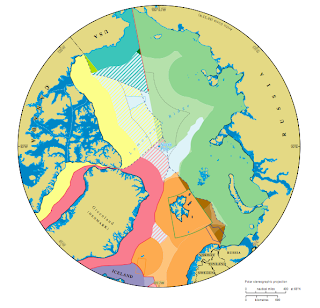 Map showing different nations’ maritimes claims in the Arctic Ocean
(see a larger map showing this complex issue here)
Could Scotland go the way of Ukraine with its Crimean and Trans-Carpathian Ruthenian separatists? or Georgia with its Abkhazian and Ossetian ones?—breaking free of an empire only to find itself fracturing within (a phenomenon of nested identities I like to call matrioshka nationalism)?  Not likely, since an independent, oil-rich Scotland would be a mighty comfortable, prosperous, progressive place to live.  But we can expect the Shetlands and Orkneys and maybe the Outer Hebrides to demand status as special autonomous regions, and, now that the legal experts have questioned our assumptions about marine territories and about the legal basis of sovereignty in the British Isles, the legal field may be wide open and the economic stakes for that might be fairly high. 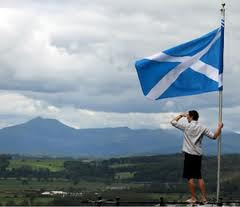