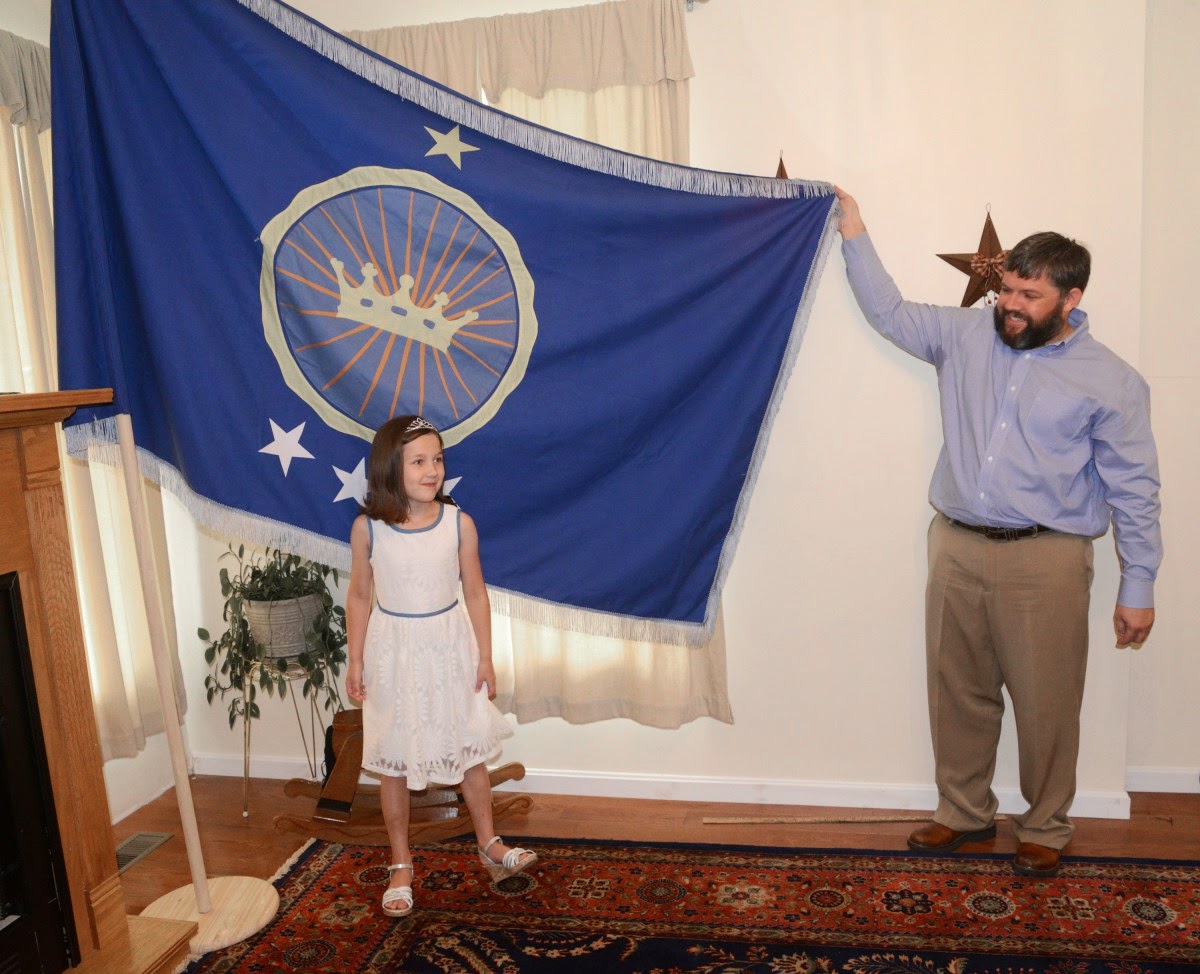 This Bastille Day, the world awoke to news that a new independent nation had been declared.  No, not Kurdistan or Catalonia or Scotland, but something called, in what is one of the more bizarre “micronations” to be founded in recent years, the Kingdom of North Sudan.  Nor was it founded by any of the numerous rebel groups—Nubians, Darfuris, etc.—who are battling the genocidal regime that runs the Republic of Sudan.

The declaration was made by one Jeremiah Heaton, a former Democratic Party Congressional hopeful from Abingdon (pop. ca. 8,000), in the Appalachian western reaches of Virginia, who last month made a 14-hour overland trek via desert caravan to a remote, disputed shard of territory between Sudan and Egypt, planted a flag, and declared it, provisionally, “the Heaton Kingdom” and later, officially, on a suggestion from his children, the Kingdom of North Sudan. 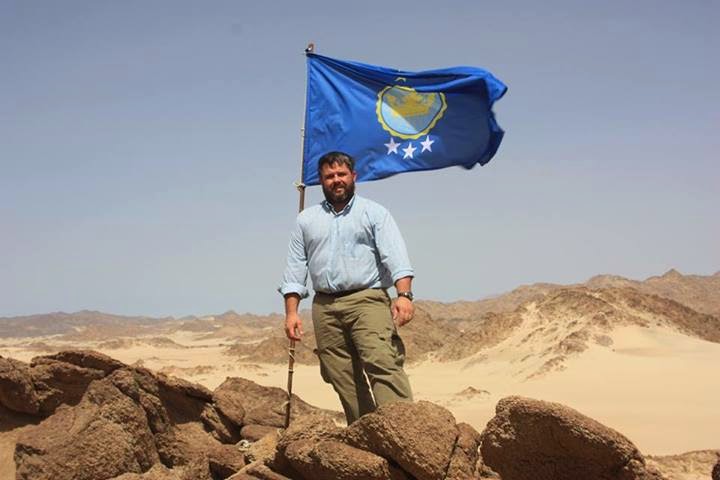 His children?  Yes, well, this is sort of all about his children.  The reason Heaton has made himself king of North Sudan is to fulfill a promise to his seven-year-old daughter, Emily Heaton. As the self-styled monarch told the press, “Over the winter, Emily and I were playing, and she has a fixation on princesses.  She asked me, in all seriousness, if she’d be a real princess someday.  And I said she would.”

The piece of land in question is Bir Tawil, an 800-square-mile lozenge of desert.  Its special status is due to it having fallen between the cracks of two border agreements: first, the Anglo-Egyptian Condominium Agreement of 1899—which made the 22nd parallel the frontier between the United Kingdom’s newly conquered “Anglo-Egyptian Sudan” (with an emphasis on the Anglo) and what was then an Ottoman Empire puppet state called the Khedivate of Egypt—and, second, a British modification of the boundary in 1902, taking tribal territories into slight account.  For a time, Egypt ruled Bir Tawil while the British in Sudan ruled the larger, coastal wedge of land falling between the two borders, the so-called Hala’ib Triangle.  Today, the independent states of Egypt and Sudan both claim the far larger and more strategic and valuable Hala’ib Triangle.  But the Egyptians, as part of their insistence on using the 22nd parallel as the boundary (thus granting themselves the Hala’ib Triangle), have relinquished their claims on Bir Tawil, and the Sudanese have done the same as part of their position that only the 1902 line is valid.  Thus, today, Egypt de facto administers the Hala’ib Triangle, and no one administers Bir Tawil.

This is what made Heaton figure that no one would mind if he, you know, just took the territory.  As Heaton himself put it this week, “It’s beautiful there.  It’s an arid desert in northeastern Africa.  Bedouins roam the area; the population is actually zero.”  Whoa, wait, wait—what did he say again?  “Bedouins roam the area; the population is actually zero.”  Yes, that’s what he said.  So, let me get this straight: Bedouins don’t exist? or they aren’t people? or is it just that Bedouins, being nomadic, are presumed to have no rights in any territory whatsoever?  The same callous, dehumanizing logic that has been used to legitimize European colonialism not just in Africa but in the Americas, Australia, and elsewhere is on full display here: “You’re not doing anything with the land that I recognize as ‘ownership’ or ‘permanent residence.’  Thus, white people can take it.”  Oh, but, wait, no—it’s all about Daddy’s Little Princess!  Sorry, sorry, I forgot; didn’t mean to make it sound colonialist or anything. 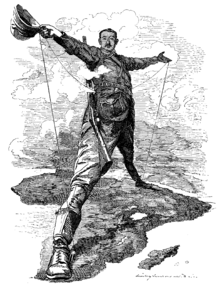 Africans, sadly, are used to white monarchs—most often, admittedly, legitimate ones—using their land to hand out as party favors to ease family relationships.  One example is the Heligoland Treaty of 1890, in which Germany’s emperor, Kaiser Wilhelm II, swapped Zanzibar to Queen Victoria in exchange for the North Sea island of Heligoland and the Caprivi Strip territory (which, as discussed in an article on this blog, Germans could could use as a supply route between German South-West Africa, today’s Namibia, and German East Africa, today’s mainland Tanzania).  That treaty included a special clause which threw a dogleg into German East Africa’s otherwise ruler-straight border with British Kenya, leaving Mt. Kilimanjaro on the Tanganyika side.  This was done because Wilhelm, who was also Victoria’s grandson (yes, that eventually made things kind of awkward, oh, ’round about 1914), had been pouting about the fact that he didn’t own as many African mountains as his English cousins.  Plus ça change, plus c’est la même chose. 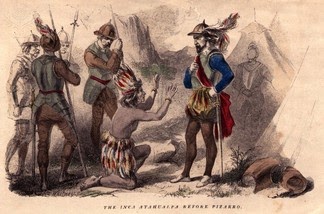 But Jeremiah Heaton is hardly Kaiser Wilhelm II.  In fact, even though the Kaiser’s facial hair is considered much more hip in 2014 than Heaton’s evenly trimmed full beard, Heaton nonetheless very commendably refrained from using mustard gas as a campaign tactic when he sought the Democratic nomination to represent Virginia’s 9th District in 2012.

As for Princess Emily, she seems determined to become a benevolent dictator (though with two brothers, she may never accede to the throne, at least under Salic Law).  True, she is as pampered as any well-off little American girl and sleeps in a princess-themed canopy bed.  But she has expressed concern that the people in and around her new realm have enough to eat.  “That’s definitely a concern in that part of the world,” King Jeremiah told an interviewer.  “We discussed what we could do as a nation to help.  If we can turn North Sudan into an agricultural hub for the area—a lot of technology has gone into agriculture and water.  These are the things [Emily and her brothers Prince Justin and Prince Caleb] are concerned with.”

Such magnanimity, unfortunately, may not mollify the brutal Islamist regime in the Republic of Sudan.  The country’s military dictator, Omar al-Bashir, rules through shari’a (Islamic law), something made easier after Western powers sheared off the predominantly-Christian, oil-rich southern half of his country away as an independent state, the Republic of South Sudan, in 2011.  Since then, Bashir has also faced Arab Spring uprisings challenging his rule, insurgencies in the southern regions of Nubia and Darfur, and a 2009 International Criminal Court (I.C.C.) arrest warrant on charges of crimes against humanity, including genocide, for his pitiless proxy war—using the dreaded Janjaweed militia—against the civilian population of Darfur.  Because of these international criminal charges, he is barely able to leave his country, and Sudan is excluded from participating as a full member of the international community.  Sudan was (as discussed at the time in this blog) also one of only 11 states—alongside pariah nations like Syria, Iran, and North Korea—to vote with Russia against a United Nations resolution recognizing Ukraine’s territorial integrity following the Russian invasion and annexation of Crimea.  To sum things up, Omar al-Bashir is a very, very grumpy man indeed.
Nor does the official absence of a territorial interest in Bir Tawil mean that this piece of land is not an ideological and political flashpoint.  Sudan’s narrow Red Sea coastline is now its most important economic asset, that being the only route by which Bashir’s former captive nation and current arch-enemy, South Sudan, can bring its oil to market, via pipelines through Sudan proper to Port Sudan.  That interdependence between the two Sudans is probably the only thing keeping Sudan and South Sudan from destroying each other in all-out war (that and the fact that South Sudan is busily destroying itself in a civil war).  But South Sudan’s military, the Sudanese People’s Liberation Army (S.P.L.A.), a former rebel army, is, by most accounts, at least indirectly in league with rebel groups within the predominantly-Arab rump Sudan—not just the Justice and Equality Movement (J.E.M.) rebels in Darfur (a formerly quasi-independent region on border with Libya) but also something called the Eastern Front.

The Eastern Front, which draws support from the coastal area’s Cushitic-speaking Beja ethnic group and the Saudi-derived Rashaida Bedouin Arabs—and perhaps from the dictatorship in neighboring Eritrea—routinely demands more autonomy and is well aware of the strategic importance of the coastline.  In 2005, the Sudanese military killed 17 Beja rioters in Port Sudan, stoking anti-government feeling.  And one of their key demands is wresting the Hala’ib Triangle from Egyptian control—a demand which has become shriller as the new Egyptian dictatorship has cracked down harder on Islamists.  In short, the Eastern Front, with its preoccupation with the unsettled Egyptian border, is a potential mortal threat to the Bashir regime.  The question of who runs Bir Tawil and Hala’ib could conceivably be reopened at any time.

King Jeremiah’s naïveté in the face of such realities is stunning.  As he told reporters this week regarding the question of diplomatic recognition, “I feel confident in the claim we’ve made. That’s the exact same process that has been done for thousands of years.  The exception is this nation was claimed for love.”  That’s right: he loves his little princess so much that he’s giving her the gift of a coveted spot on the target list of a terrorist Islamist régime.

[You can read more about separatist and new-nation movements, both famous and obscure, in my new book, a sort of encyclopedic atlas just published by Litwin Books under the title Let’s Split! A Complete Guide to Separatist Movements and Aspirant Nations, from Abkhazia to Zanzibar.  The book, which contains 46 maps and 554 flags (or, more accurately, 554 flag images), is available for order now on Amazon.  Meanwhile, please “like” the book (even if you haven’t read it yet) on Facebook and see this special announcement for more information on the book.] 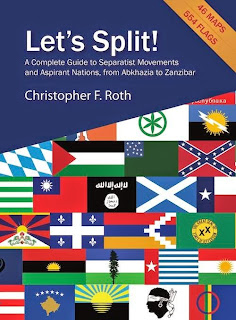 As one might imagine, sometimes my friends and colleagues let me know about a news development before Google Alerts has a chance to.  In this case, thanks are due to Susan Abe, Tea Krulos (author of Heroes in the Night), and Emperor George II (Empire of Atlantium; like it on Facebook) for calling this story to my attention.
Posted by Chris Roth at 7:21 PM