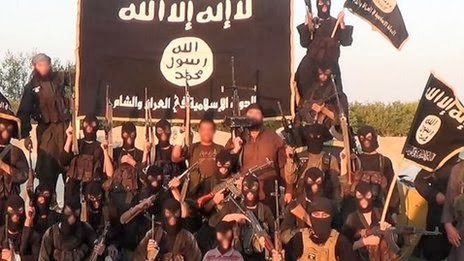 The redrawing of the map of the Middle East continued apace this past week, following the takeover of Fallujah and part of Ramadi in western Iraq’s Anbar province by a radical Islamist group affiliated with al-Qaeda.  Turkmens, Christians, and Kurds are all scrambling for pieces of the territorial pie as Syria and Iraq both spin out of control and into anarchy.

Anbar
First, the radical Sunnis.  The Islamic State of Iraq and al-Sham (ISIS), an outgrowth of last decade’s al-Qaeda in Iraq (a.k.a. Islamic State of Iraq, or I.S.I.) militia (which itself grew out of the al-Qaeda network in Afghanistan), had for months been building up its strength in the power vacuum of Syria’s civil war, mostly at the expense of the far more moderate, Western-backed, but utterly disorganized and fractious Sunni rebel network known as the Free Syrian Army (F.S.A.).  Then, on January 3rd (as reported at the time in this blog), ISIS fighters entirely took over Fallujah, a major city in Sunni-Arab-dominated Anbar province in western Iraq, about a half hour’s drive from the western outskirts of Baghdad.  ISIS fighters have held on there, but have been a bit less successful in taking over the smaller city of Ramadi, Anbar’s capital.  Fallujah was the scene of two of the fiercest battles in the United States’ war in Iraq, in 2004, with U.S. and Iraqi-government forces trying to quell a radical Sunni insurgency.  Things look similar now, except that the U.S. is gone, and the Islamists are winning (never mind that Sunni radicals would never have gained a foothold if the U.S. hadn’t invaded in the first place).  Fallujah is probably the city with the strongest anti-Shiite sentiment, and most of that anger is directed at the Shi’a Arabs who have run Iraq since the Sunni (but fiercely secularist) dictator Saddam Hussein was toppled in 2003 and the 65%-or-so Shi’a majority came to power in the ensuing elections.  Now, as Shiite bombs are feared soon to rain down on Fallujah, the prejudices of ordinary Sunni people in the city are hardening.  The Iraqi government is reportedly planning on keeping its assault—once it gets up the nerve to launch it in earnest—away from civilian areas for this very reason, but it won’t take much for any moves by Baghdad to feel like an anti-Sunni massacre to those in Fallujah.  The tribal Sunni militias in Anbar which the U.S. had tried to cultivate as partners to the new Shiite-led government—with partial success—seem now to be siding mostly with ISIS.

ISIS has declared Fallujah to be an independent Islamic state.  Whether that state is something called the Islamic State of Fallujah, or whether it is presumed to be the kernel of an emerging Islamic State of Iraq and al-Sham is something which may slowly become apparent.  Perhaps the ISIS warlord in Fallujah, Abu Waheeb, is improvising as he goes along.  (Al-Sham means, roughly, the Levant, i.e. Syria and Lebanon; some news sources are calling ISIS “ISIL,” for Islamic State of Iraq and the Levant, and some are saying, inaccurately, that ISIS stands for Islamic State of Iraq and Syria—but they all refer to the same group.)  Much will depend on whether control of all or some of Anbar can be consolidated and whether that territory can be linked up with ISIS’s “liberated” territory in eastern Syria.  Which brings us to ...

North-central Syria’s heartland
Late last year, ISIS began capturing small towns in northern Iraq, mostly along the border with Turkey, in Syria’s Kurdish region.  The first of these was Azaz (as reported at the time in this blog), and others followed.  But by December ISIS was exceeding all expectations, capturing smaller towns in the far east along the Iraqi border and in the far west, in the Alawite (Shiite) Arab heartland of Latakia province.  Its biggest prize, however, has been ar-Raqqah, a provincial capital in north-central Syria.  Ar-Raqqah province borders Turkey and includes Kurdish areas, but its capital is on the Euphrates, which flows from ar-Raqqah to Ramadi and Fallujah in Iraq.

But is ISIS going to capture the entire upper Euphrates and build a coherent territory in the way that the Kurds have?  Maybe not.  The al-Nusra Front, the loosely organized Syrian-based component of ISIS, is apparently seeing some defections, with individual militias deciding that the former I.S.I. units with whom they formed ISIS last year are foreigners who are too radical for them, and maybe even worse than the embattled Alawite dictatorship of Bashar al-Assad.  This is partly because of ISIS’s governing style, which involves sweeping into town, executing a few “infidels” and “traitors” in the town square, and then dispatching armed morality patrols to enforce shari’a (Islamic law).  What had become, by late last year, a three-way battle in Aleppo, ar-Raqqah, al-Hasakah, and Deir ez-Zor provinces among Assad’s government forces, the F.S.A., and al-Nusra may soon become a four-way battle among the government, the F.S.A., al-Nusra, and ISIS.  No, wait, five-way—since Kurdish militias (more on them below) are also vying for control of al-Hasakah city and parts of Aleppo. 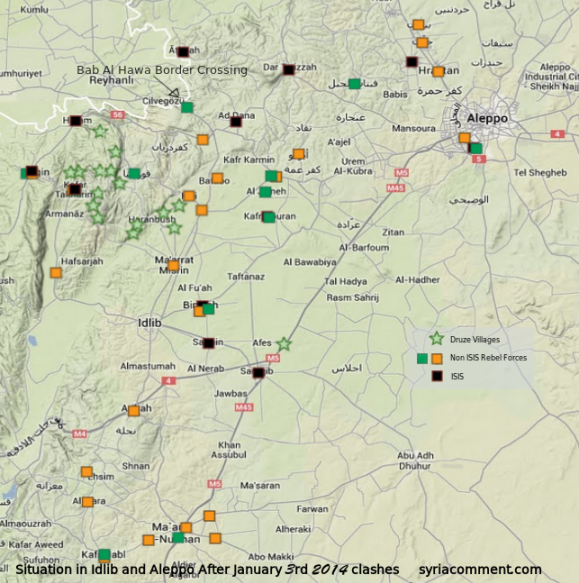 These new twists put Western backers like Turkey and the U.S. in a quandary.  They know whom they want to win in Iraq, but in Syria it’s not so simple.  It was bad, and embarrassing, enough, when various forms of aid sent in the direction of the F.S.A. ended up in al-Nusra hands, but now the West may need to calculate that it’s worth backing al-Nusra for a little while—you know, just a little while—until ISIS is brought under control.  Sounds like a bad idea: help bad guys because they’re helping you fight worse guys depends a lot on fallible judgments as to who is bad or worse, and it can have an effect called “blowback.”  After all, that’s how the Taliban and al-Qaeda came to power in Afghanistan in the first place.  As for the Syrian opposition’s other “Western” backers, Saudi Arabia, well, for them strengthening al-Nusra might not even be a difficult choice.  Many of them are Saudis anyway, and have the tacit blessing of the royal family.  Look for a serious, perhaps permanent falling out between the U.S. and Saudi Arabia over how to handle Syria.

Syrian Kurdistan
Things are a little bit more stable in the far north of Syria, along the border with Turkey, as the de facto self-governing Western Kurdistan Autonomous Region formed last year in liberated pockets along the border was in November 2013 rechristened Rojava (which simply means “western” in Kurdish) and was given specific contours and a formal (unrecognized) government (as reported at the time in this blog).  This past week, the Rojava government started filling in the details of its supposedly federal-style internal structure, with separate autonomous entities for Kurds, Christians, and Arab Muslims.  On January 6th, the Rojava’s governing Western Kurdistan Constituent Assembly unveiled a new constitution, which specifies the three autonomous subdivisions and confirms that the new state will be official multilingual, with state business conducted in Kurdish, Arabic, and Syriac (i.e. the variety of Aramaic—the language spoken by Jesus—which is in use today in the Syriac, Chaldean, and Assyrian communities of Middle Eastern Christians).  Other statements out of Rojava have also referred to equal rights for the Turkmen and even Chechen minorities.

This may have something to do with the fact that, to both Turkey’s consternation and that of the Kurdistan Regional Government (K.R.G.) in neighboring Iraq, Rojava is being run by the Democratic Union Party (Partiya Yekîtiya Demokrat, or P.Y.D.), a group linked to Turkey’s outlawed, traditionally-Marxist-Leninist Kurdistan Workers’ Party (Partiya Karkerên Kurdistan, or P.K.K.) and antagonistic to the K.R.G. government.  In Iraq’s Kurdistan Region, Kurds vie for control of the Kurdish-populated penumbra outside the official autonomous region, in places like Mosul, Kirkuk, and the Nineveh Plains that are also regarded as homelands for the Turkmen and Assyrian people, who naturally want their own autonomous regions.  Are the Rojava Kurds competing with the K.R.G. for the loyalties of the region’s smaller minorities?  If so, this could get much messier. 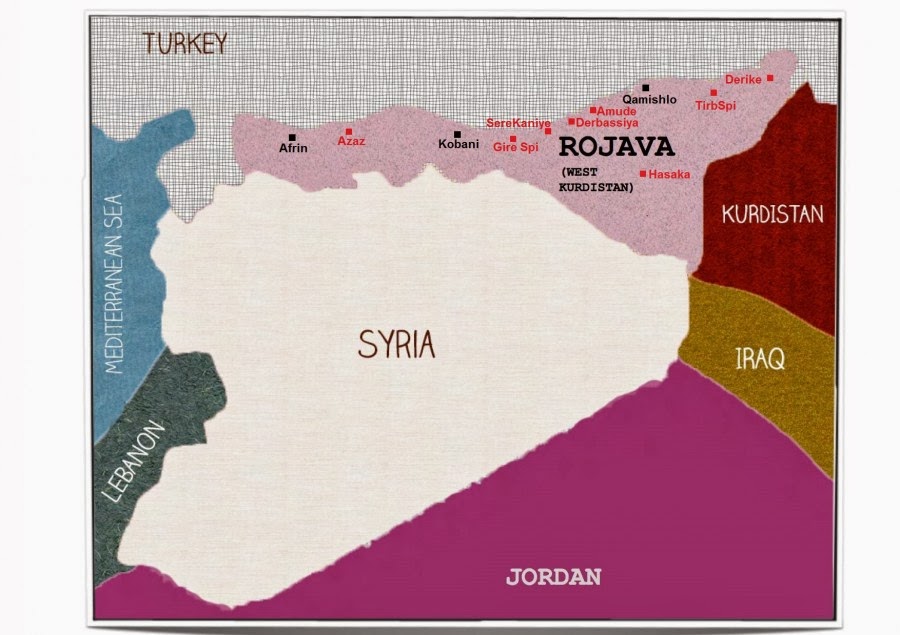 Northern Iraq
Meanwhile, perhaps as a direct response to the developments in Rojava, the Iraqi parliament in Baghdad voted on January 8th to make Turkmen, Syriac, and Assyrian national languages alongside the existing official languages, Arabic and Kurdish.  (There is a lot of variation in how to name the modern Aramaic languages; some use the terms Assyrian, Chaldean, and Syriac interchangeably, or use one term as including the other two, or name the same language differently depending on which self-identified ethnic or sectarian group is using it.)  Meanwhile, Turkmen leaders in areas hard-hit by terrorist violence said this week that they were forming popular defense committees along the lines of those formed by Kurds in Syria.

Things change in the region almost daily.  Springtime of Nations will do its best to stay on top of developments and keep you informed.