[Note: This article was written based on preliminary reports on the Bakassi situation.  A more complete analysis, with more background, is in my blog article “Southern Nigeria Splitting Apart Too as Muslim North Burns” (Aug. 23, 2012).]


The relatively newly minted Ambazonia People’s Congress (A.P.C.), representing Cameroon’s Anglophone minority, has asked the national legislature to revisit the 2006 international agreement under which the Bakassi Peninsula was transferred from Nigeria to Cameroon.  The group’s head, Fon Gorji-Dinka—an attorney working since the 1980s on behalf of the formerly British-ruled Southern Cameroon region, which now includes Bakassi—claims that the Bakassi region is technically a part of neither Nigeria nor Cameroon but in fact an independent state.

Gorji-Dinka’s rather flimsy and tangential legal argument cites a 1984 United Nations (U.N.) committee finding referring to a distinct region called Ambazonia and the 1984 Cameroonian law erasing the Cameroon’s status as a titular union of Anglophone and Francophone territories—i.e. the name change from the United Republic of Cameroon to the Republic of Cameroon.

The larger region of which Bakassi is now a part—so-called Ambazonia or Ambazania—was the part of Germany’s colony Kamerun that was subdivided in 1918 between the British and the French as First World War spoils.  The francophone part eventually became independent of France as Cameroon (Cameroun, in French) in 1961, while a plebiscite was held to determine the fate of the British portion—two territories called Southern Cameroons and Northern Cameroons.  Southern Cameroons, though English-speaking, was attached to the French-dominated, newly independent Cameroon, while Northern Cameroons became part of Nigeria, the eastern edge of today’s Middle Belt region.  In 1972, a new Cameroonian constitution extended Francophone central-government control, exacerbating separatism in the former Southern Cameroons.  In 1999, the Southern Cameroons National Council (S.C.N.C.) declared, mostly symbolically, an independent Republic of Ambazonia, citing a 1995 non-binding referendum on independence in which separatists won out with 99%, and in 2006, after the Bakassi cession, the Southern Cameroons Peoples Organization (SCAPO) declared a rival Republic of Ambazania (note slight difference in spelling), which included Bakassi as well.

Neither movement ever controlled any territory or won much support abroad, but activists such as Gorgi-Dinka continue to press their case.  The restriction of the Ambazonian claim to the tiny Bakassi Peninsula, however, seems to be a new wrinkle. 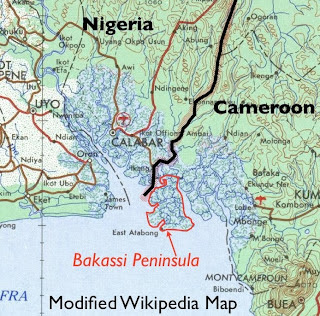 There might be a logic to this.  It may be that mainland Ambazonians, who are more cosmopolitan, are more keen on integrating peacefully into Cameroon.  Bakassians, though—members of the Efike or Efik ethnic group, some of whom have been agitating quietly for several years now for a separate Republic of Bakassi—have linguistic, cultural, and historical affinities with the Ogoni, Ijaw, and other peoples of the Niger Delta region over the border in Nigeria.  Both areas were part of the Calabar (a.k.a. Kalabar) Kingdom, which became part of the British Empire in 1884 (see map above).  Many Bakassians, less so than mainlanders in southwestern Cameroon, consider themselves tied to Calabar, which still operates as a largely ceremonial kingdom on the Nigerian side of the border.  The Ogoni, in their battle with international oil companies, have been among the most strident separatists in Nigeria in recent history, and their cause was brought to prominence by the state-sponsored murder, in 1995, of their most prominent activist, the novelist Ken Saro-Wiwa.  With an Islamist insurgency in the north led by Boko Haram, and worries about a resurgence of Yoruba and Igbo (Biafran) nationalism as well, Nigeria is at a centrifugal point in its history.  Perhaps Gorji-Dinka and other Ambazonian nationalists are hoping that that is a regional trend they can work with and build on.