Mali Becomes the 92nd Country to Formally Recognize Kosovo ... or Not 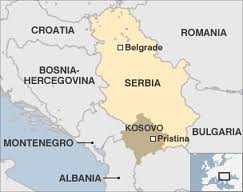 At first it looked as though the Republic of Kosovo, which seceded unilaterally from the Republic of Serbia in 1999 under NATO protection and declared formal independence in 2008, had just been recognized by its 92nd foreign government.

(Kosovo is in a state of diplomatic limbo: its membership in the United Nations General Assembly is blocked for the foreseeable future by Security Council vetoes wielded by Russia and China, which are allergic to all forms of separatism as a matter of policy.  Oh, wait, except for Russia, which supports separatist movements in Abkhazia, South Ossetia, Transnistria, Nagorno-Karabakh, Crimea, and Transcarpathian Ruthenia.  Oh, and also except for China, whose Shanghai Cooperation Organization partners in the regional struggle against extremism and separatism include Kazakhstan, Kyrgyzstan, Tajikistan, and Uzbekistan, all of which seceded from the Soviet Union in 1991.)

The fledgling Kosovo’s new political coup seemed odd from the start, though, since diplomatic partner no. 92 (out of, depending on how one counts them, somewhere between 190 and 200 sovereign states) was the Republic of Mali, which in some respects has had more in common with Serbia since earlier this year, when the northern two-thirds of Mali seceded as the Independent State of Azawad and remains outside of central-government control. 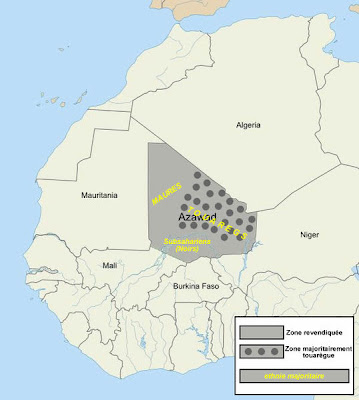 Now, it turns out it was too odd to be true.  Mali’s government—an interim civilian government still more or less under the thumb of a military junta—issued a statement on August 23rd saying that, “The presidency would wish to categorically deny this falsehood which intends to tarnish the image of Mali,” adding that it reserved “the right to take appropriate measures to identify and punish the authors of the false document.”

And who were the authors of the false document?  Maybe sneaky Serbs, trying to find more and more roundabout ways of humiliating Kosovar nationalists.

[Related articles: “Mali Becomes the Latest African Country to Split along North–South Lines” (Feb. 2012), “Balkan Semantics: How Kosovo Dropped Two Words and Serbia Gained Europe” (March 2012), “A New Country in Africa: Islamic Republic of Azawad” (April 2012), “Why It Matters What You Call Your Country: Cyprus vs. Northern Cyprus, Azawad vs. the Azawad” (April 2012), “Dream of a Tuareg State Fizzles: Is This the End of Azawad?” (July 2012), “10 Ethnonationalist Causes That Might Disrupt the Olympics” (July 2012).]

[Also, for those who are wondering, yes, this blog is tied in with a forthcoming book, a sort of encyclopedic atlas to be published by Auslander and Fox under the title Let’s Split! A Complete Guide to Separatist Movements, Independence Struggles, Breakaway Republics, Rebel Provinces, Pseudostates, Puppet States, Tribal Fiefdoms, Micronations, and Do-It-Yourself Countries, from Chiapas to Chechnya and Tibet to Texas.  Look for it in spring 2013.  I will be keeping readers posted of further publication news.]
Posted by Chris Roth at 10:24 AM