Dream of a Tuareg State Fizzles: Is This the End of Azawad? (Mali Update) 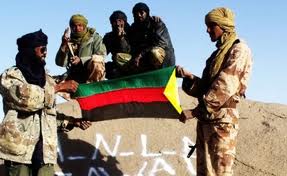 The flag of the Independent State of Azawad.  Is it time to fold it up?

Secular Tuaregs Drop Separatist Agenda, Just Want Islamists Ejected.  The secular Tuareg separatist army called the National Movement for the Liberation of Azawad (M.N.L.A.) announced July 15th that it was dropping its goal of secession from the Republic of Mali.  The group declared independence in early April for the Tuareg-dominated northern two-thirds of Mali, which then became the unrecognized Independent State of Azawad.  But gradually Ansar al-Dine, the al-Qaeda-affiliated Islamist militia that aided in the Tuareg conquest of Mali’s northern cities—while the central government was paralyzed by a military coup d’état—took over the governing of Azawad and has been imposing a harsh form of Islamic law (shari’a) on the population.  Ibrahim Ag Assaleh, a senior M.N.L.A. official, told media on the 15th, “We are seeking cultural, political, and economic independence, but not secession.  It would be something like Quebec.”  Another official, Hama Ag Mahmoud, added, “Independence has been our line since the start of the conflict, but we are taking on board the view of the international community to resolve the crisis.”  However, another M.N.L.A. spokesman, Moussa Ag Assarid, says that the group has not abandoned the quest for independence and says any such reports are deliberate misinformation.  Clearly, then, there is not M.N.L.A. unanimity on the issue.  For its part, Ansar al-Dine claims that its goal is to impose shari’a on all of Mali—which is so unlikely that in reality they will only be able to achieve a brief de facto independent Azawad made up of the Islamist-controlled areas—until the international community starts trying to wipe them off the face of the Sahel. 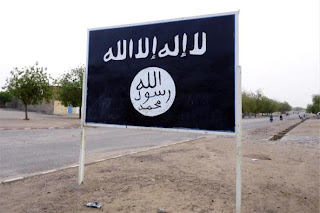 Various international organizations—the United Nations (U.N.), the African Union (A.U.), and the Economic Community of West African States (Ecowas)—have favored a return to civilian rule in the capital and a reunification of the country.  But the International Crisis Group (I.C.G.), a global non-governmental organization (N.G.O.), said in a report on July 18th that Mali’s crisis of leadership in the capital needs to be resolved before Azawad can be recaptured by military intervention, and the foreign ministers of France and Algeria issued a joint statement July 15th favoring political over military solutions.

Pro-Government “Gandakoy” Militia in Mali’s Mopti State Defects to Islamists.  About 400 fighters from a militia known as the “Gandakoy,” formerly loyal to the Malian government, have switched sides and are now allied with Ansar al-Dine.  The defection seems to have occurred in Douentza, in Mopti province—the southernmost and by far most populous and least nomadic and least ethnically Tuareg portion of Azawad, though only part of Mopti is under Azawadi control.  Douentza, in fact, lies right on the border area between Azawad-controlled and Malian-controlled areas.

To understand what this defection means, we should review a little about Mali’s ethnic geography.  The Tuareg are a nomadic people related to the Berber who inhabit a vast interior desert area that includes, in addition to Azawad, parts of Mauritania, Niger, Burkina Faso, Algeria, and Libya.  Tuaregs were the personal strike force of Moammar al-Qaddafi, and it was Tuaregs fleeing the anti-Tuareg reprisals of the post-Qaddafi regime in Libya who stoked separatism in northern Mali earlier this year.  The three northern Malian provinces of Gao, Kidal, and Timbuktu—which, with Mopti, make up Azawad’s claimed territory—are overwhelmingly Tuareg (other than an Arab, or “Moorish,” minority along Timbuktu province’s border with Mauritania).  But Mopti is a far more densely populated, less arid area which is home to Dogon, Songhai, Bambara, Bozo, Fulani (a.k.a. Peul, speakers of Fula, a.k.a. Fulfulde), and other ethnic groups.  (Bambaras dominate in southern Mali and in the capital, Bamako.) 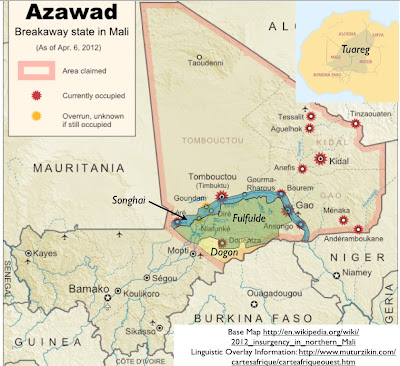 A map showing The three main provinces of Azawad to the north—Timbuktu, Kidal, and Gao—plus the semi-Azawadi-controlled Mopti province, with the areas of its Songhai, Dogon, and Fulani (Fulfulde-speaking) inhabitants.

It is hard to learn much about the Gandakoy, which appears to be dominated by the Songhai, but a Facebook account active mainly in February and March of this year, named Mouvement Patriotique Malien Gandakoy (Patriotic Malian Movement of Gandakoy), emphasizes multi-ethnic Mopti’s edge in population over the territorial vastness of the thinly populated, nomadic, Tuareg parts of Azawad—writing, in a March 1st status update, “The French media have de facto adopted M.N.L.A.’s definition of Azawad and stubbornly want to instill in the minds of the public that Azawad consists of four major regions, namely Timbuktu, Gao, Kidal, and Mopti”—a territory which, because of Mopti, has “a majority (90%) of sedentary Songhai, Peul, Bozo, Arabs, Bambara, making up a population of 6 to 7 million inhabitants.”  The Tuareg separatist M.N.L.A., which launched the secession, “represents,” the status update goes on, “only a tiny fraction of this population.”  The page’s profile picture includes a map coloring an area that includes all of Mali, Senegal, and Guinea-Bissau, most of Sierra Leone, plus western Niger, southern Mauritania and bits of Burkina Faso and Algeria.  This area corresponds to no single ethnic or religious group, leading to the impression that these are ultranationalists nostalgic for the old days of the Malian Empire.  So their switch to join the anti-nationalist, internationalist-jihadist Ansar al-Dine is a case of strange bedfellows—especially since part of, perhaps most of, Ansar al-Dine’s leadership and membership is Tuareg.  More curiously, an apparently pro-M.N.L.A. website, in a December 2011 article, identified the Gandakoy as “nothing but an emanation of the Malian government” (this was before the coup d’état) which practices terrorism against Tamasheq (i.e. Tuareg) and Arab civilians.  I would welcome any further enlightenment from readers on who the Gandakoy are and how they fit into Mali’s rapidly shifting political ethnoscape. 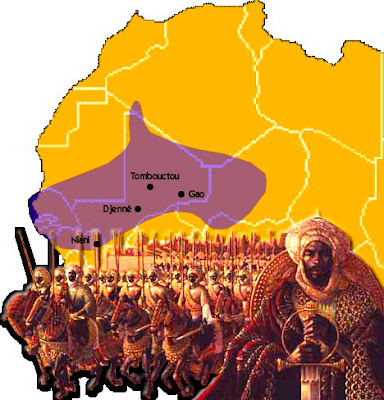 Ansar al-Dine Literally Whips Secularists into Line after Uprising near Timbuktu.  In Goundam, west of Timbuktu, in Azawad, secularists rose up July 13th against their Ansar al-Dine overlords after a young Islamist patrolman whipped a woman carrying a baby because she (the mother) was wearing an inadequately modest veil.  The baby fell as a result of the attack and was critically injured, according to witnesses.  This was too much for the citizenry, about 100 of whom then marched on the Ansar al-Dine local headquarters, vandalized it, and looted food supplies.  The Islamists responded with a crackdown—surrounding the town with checkpoints and going door to door to round up suspected dissidents and, reportedly, whipping 90 of them.  By the next day, most residents were staying inside while heavily armed jihadists patrolled the city.  Goundam originally had a population of 13,000, but since the civil war began in March, about two-thirds of the population has fled. 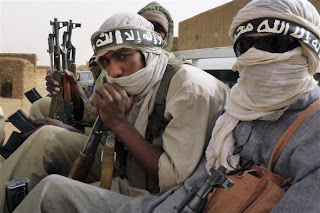 Islamist Threats Lead to Cancellation of Moorish Conference in Azawad.  A pro-secession group dominated by Azawad’s Arab (Moorish) minority has had to cancel a conference after threats of violence from radical Islamists.  The Moorish group, the National Liberation Front of Azawad (called N.L.F.A. or, more commonly, F.N.L.A., its French acronym), originally scheduled the July 7th conference, in Boujbeiha, north of Timbuktu, for dignitaries and community leaders from Azawad’s Moorish communities, some of them residents of refugee camps for Malians in neighboring Mauritania.  A Timbuktu journalist said that Ansar al-Dine denied issuing the threats, suggesting that the threats came from the al-Qaeda Organization in the Islamic Maghreb (A.Q.I.M.), the regional terrorist network of which Ansar al-Dine is in some ways a local affiliate.  The conference, however, will be rescheduled, and an F.N.L.A. activist, Sidi Ould Abdallah, said, “We will challenge these threats to express Azawad Arabs’ refusal to give in to a theocracy.”

MUJAO Releases 6 Algerian, European Hostages.  The Movement for Unity and Jihad in West Africa (MUJAO), another offshoot of A.Q.I.M. which has also been running wild in Azawad, has released three of the seven diplomats from Algeria that it had abducted in Gao, in Azawad, around the time of the territory’s declaration of independence, on April 5th.  The release was announced on July 12th.  A few days later, on July 18th, MUJAO freed two aid workers from Spain and one from Italy who had been kidnapped in October 2011 from a refugee camp in Algeria for refugees from Western Sahara.  The three were flown to safety in Burkina Faso before returning home to Europe. 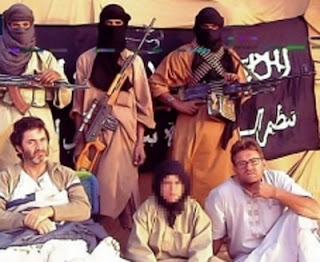 One last group photo before we have to go home!