Europe’s cultural and even political boundaries have never been more fuzzy and contested.  The Euro Zone crisis is intensifying chauvinistic opinions on what it means to be Northern European and Southern European.  Padania (northern Italy), Catalonia, and even France’s region of Savoy (see a report on Savoyard separatism from this blog), are itching to secede.  Switzerland is content to be a gaping doughnut hole in the European Union (E.U.).  And an island in Greece is even trying to join the Republic of Austria (as reported last week in an article in this blog).  It’s always an exercise in perspective to take a look at central Europe’s complicated history and figure out how we got here and where we might be headed. 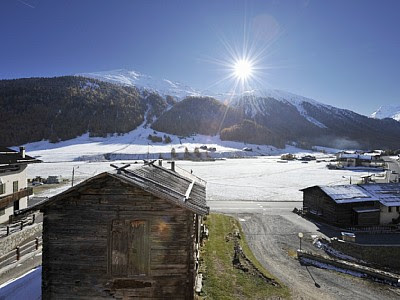 In that spirit, an academic conference held jointly in the nearby border towns of Tirano, Italy, and Poschiavo, Switzerland, on June 22-23 was the occasion for historians to mull the significance of the 500th anniversary of the annexation, in June 1512, of the Italian region of Valtellina by the Free State of the Three Leagues, which is now the Swiss canton of the Grisons (Graubünden in German, and Grigioni in Italian).  Today, Valtellina forms more or less the province of Sondrio in the Lombardy region of northern Italy, but in 1512 it was under the control of the Holy Roman Empire’s Duchy of Milan until the Three Leagues annexed it.  It remained a Three Leagues dependency without ever being asked to join the Free State’s tripartite confederation (the three leagues were the League of God’s House, the Grey League—Graubünden literally means “Grey League”—and the League of Ten Jurisdictions).  Thus, after conquering Switzerland and northern Italy, Napoleon Bonaparte in 1798 gave the Valetellinesi the choice of which Napoleonic puppet state to join: the Cisalpine Republic, with its capital in Milan, or the Helvetic Republic, where it would be part of the Canton of Raetia (corresponding to the ancient Roman imperial province of the same name).  It chose the Cisalpine Republic, where more fellow Italian-speakers lived.  (The Helvetic Republic was, as its successor state Switzerland is today, mostly German-speakers).  So, when the Helvetic Republic was reorganized in 1803 under Napoleon into the loosely federal Swiss Confederation we know today, it was with a truncated Grisons replacing Raetia, while Valtellina became part of Napoleon’s Kingdom of (northern) Italy, then the post-Napoleonic Kingdom of Lombardy and Venetia and, later, modern Italy. 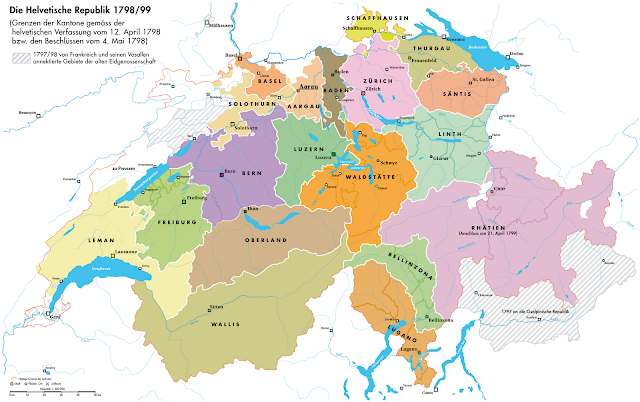 Switzerland in the late Napoleonic period.  Valtellina is shown with diagonal grey stripes in the lower right.
Today’s Grisons (Graubünden) is “Rhätien,” in lavender, just above it.  Bellinzona and Lugano later united as Ticino.

But what if the Valtellinesi had chosen differently?  As a Grisonian “fourth league,” muses the Milan University historian Guglielmo Scaramellini, Valtellina’s inclusion might have tipped the Grisonian ethnolinguistic and political balance and dampened the Grisons’ motivation to join the Swiss Confederation after Napoleon—“so that still today,” Scaramellini speculates, “there would be a Republic of the Four Leagues, independent and sovereign.  Another miniature Switzerland—but competing with the original!”  The Grisons of today is already trilingual—with a German-speaking majority outnumbering valleys populated by speakers of Italian and Romansh (Rhaeto-Romanic) (Romansh being one of Europe’s threatened languages, related to the much healthier Friulian language spoken in northeastern Italy).  But an independent Grisons that included Valtellina would be dominated by Italian language and culture, and, says the Swiss historian Florian Hitz, “One cannot be sure if a Switzerland weighted to the southeast, with Valtellina, would have been able to withstand Italian irredentism.” 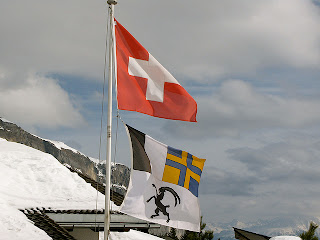 Flags of Switzerland and the Grisons

Nowhere more than on Switzerland’s borders with its neighbors, none of which corresponds to a linguistic boundary, is the arbitrariness of the lines laid down by history more obvious.  (Maybe that’s why the Swiss are so xenophobic: they are trying to change the subject so no one notices that there are no ethnolinguistic grounds for the country existing at all.)  The cultural affinities that run across the border from Valtellina to the Grisons might be something to contemplate, in light of several recent developments. 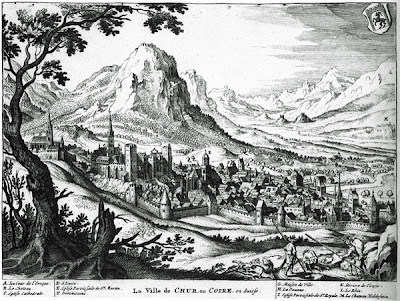 Chur, capital of the Grisons, in 1803, the year the modern Swiss Confederation was formed

Since 1995, the Council of Europe has recognized (mostly for touristic and cultural-exchange purposes) a transnational “Euroregion” called Insubria, embracing part of the Italian regions of Piedmont and Lombardy and Switzerland’s Italian-speaking canton, Ticino, to the Grisons’ west—but not, oddly enough, either Valtellina or the Italian-speaking Poschiavo valley in the Grisons.  And an Italian linguist named Lorenzo Banfi founded, in 2005, the bioregionalist nationalist political party Domà Nunch (“Only Ours,” in Lombard dialect) with the quixotic idea of one day declaring an independent Insubria. 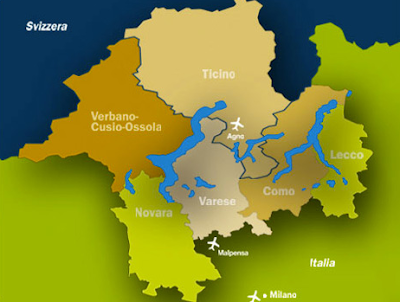 A map of “Insubria”

More relevant here, to the east, is the Euroregion of Raetia Nova—or, if you want to get pedantic about it, Rætia Nova—which as far as I can tell seems to embrace the historically Romansh-speaking areas of: Graubünden; adjoining areas of the Austrian Alps (including Vorarlberg, which after the carnage of the First World War voted overwhelmingly in a referendum to join Switzerland, but without effect); Valtellina; and the Italian autonomous region of Trentino–Alto Adige/Südtirol, where hundreds of thousands of speakers of Friulian and Tyrolean German constitute Italy’s highest concentration of linguistic minorities.  It is hard to get reliable maps of Raetia Nova, suggesting that as a Euroregion it hasn’t really gotten up and running yet, though there was a Raetian football (soccer) team that competed in this year’s VIVA World Cup competition for unrecognized states, held June 9th in Arbil, in Iraqi Kurdistan (as reported on in this blog at the time).  (Since you ask: Zanzibar, Western Sahara, and Tamil Eelam massacred them out of the top ranks with 6-0, 4-0, and 3-0 wins, respectively.)

The flag of Raetia, as used by the region’s resolutely unofficial football team.
Note the use of grey, as in the “Grey League”—otherwise a rather unusual color in flags.

Meanwhile, northern Italy’s separatist Lega Nord (“Northern League”) has recently mooted the idea of a “Greater Padania” (see my article from this blog on that particular benchmark in Umberto Bossi’s descent into silliness) that embraces all of the Alpine region, as far as northern Bavaria.  (See an article from this blog listing Padania as one of “Ten Separatist Movements to Watch in 2012” and another profiling Bossi’s son Renzo Bossi as one of “The World’s 21 Sexiest Separatists.”) 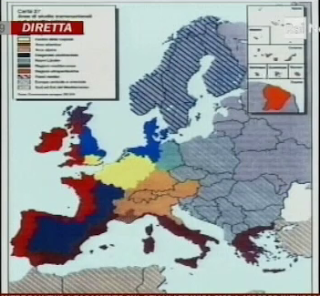 A Lega Nord–produced map of a sort of European-mini-empires fantasy league, showing,
in dull orange in the middle of everything, “Greater Padania”

Hitz says that Valtellina would theoretically make a fine Swiss canton: “Ticino was conquered territory, too, so that would fit,” he says, adding, “The country would just have been bigger and more beautiful!”  (Ah, yes, I like my countries Rubenesque myself.)  In fact, in March of this year Switzerland’s minister of defense, Ueli Maurer (ironic onomastic synchronicity: Maurer means wall-builder, but never mind), quipped that Switzerland would be economically capable of annexing Lombardy.  He was not serious, but several tens of thousands of Lombards were when, over the next few weeks, they signed a petition supporting the idea.  Under Swiss rule, Lombards would have more autonomy, a better infrastructure, an automatic exemption from foreign military adventurism, and even lower taxes—since, in this Lega Nord way of thinking, there won’t be millions of lazy, jobless Sicilians and Neapolitans to subsidize. 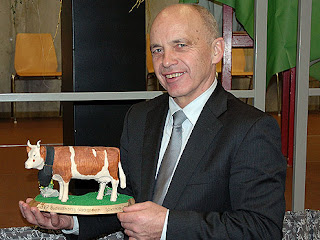 Bossi, the Lega Nord’s founder, had another idea, telling a crowd of supporters recently, “We could declare war on them” (them meaning the Swiss; Bossi is a Lombard), “and then promptly surrender.”  Somehow, I think those are the only terms of annexation the xenophobic—and in particular Italophobic—Swiss would accept.  (Lega Nord sent a delegate to the Valtellina conference to take careful notes.) 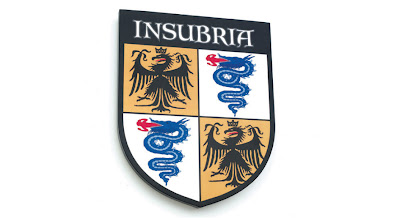 The flag of Insubria is a mighty wicked flag, in my opinion.
Yes, that’s Jonah being eaten by a (rather serpent-like) whale.  Twice.
’Cause that’s how Insubria rolls.

But all of these jokes and quips and petitions should be a wake-up call.  Many in central Europe are unhappy with the way the borders are drawn.  They don’t feel the lines and colors on the map reflect their histories, identities, and allegiances.  Sooner or later, something has to give.