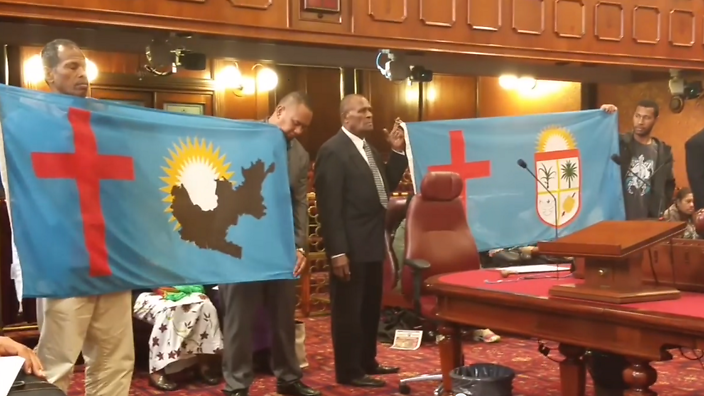 The military strongman who runs the Republic of Fiji is continuing to crack down this month on what his government and military call a separatist insurrection on Viti Levu, the Pacific nation’s largest and most populous island.

The crisis came to international attention last month, when over 50 people were arrested in Viti Levu’s Ra province, on the northeast coast, on suspicion of connection with a training camp allegedly run by a former British military officer.  Authorities said the camp was training forces to help establish two separate “Christian states” declared late last year.   The Nadroga-Navosa Sovereign Christian State, on the southwestern end of the island, in Nadroga-Navosa province, and the Ra Sovereign Christian State, in Ra, were declared in October and November 2014, reportedly with the approval and participation of some (supporters say all) local traditional chiefs.  Five people were arrested and charged with sedition at the time in connection with those declarations.  The presidents ceremonially installed for the two would-be states—Nadroga-Navosa’s Ratu Osea Turaga Gavidi and Ra’s Ratu Meli Bolobolo—have since died.

It is not entirely clear who runs the provisional governments now, but supporters in Sydney, Australia, some calling themselves the Fiji Democracy Movement, speak for the entities and have commissioned flags.  Their views are disseminated to the public by a Fijian, now banned from re-entering the country, named Oni Kirwin, who calls herself “attorney general” of the Ra and Nadroga Christian State (which makes it sound like one entity, instead of two) and talks brashly of bringing her case to the International Criminal Court in the Hague and to Queen Elizabeth II.  (Fiji was a United Kingdom colony until 1970, then a Commonwealth realm until a coup d’état in 1987.)

Most of those arrested last month, plus others later, have been charged with sedition.  In a statement, Prime Minister Josaia Voreque “Frank” Bainimarama, the former naval commander who heads the country’s ruling junta, said, “There will be no so-called independent states established in Fiji.  Anyone who swears an illegal oath will face the full force of the law.  Anyone who encourages political violence will face the full force of the law.  We will not and should not tolerate the kind of instability certain people are currently trying to provoke.  Put simply, any insurrection will be crushed.”

Bainimarama, who was elected prime minister last year in a shady and dirty election process, had served as president (and later as acting prime minister) in an unelected capacity since he took the reins of the 2000 coup d’état that unseated the elected prime minister, Mahendra Chaudhry.  Chaudhry is from the large Indo-Fijian (i.e., South Asian) community—descendants of indentured laborers imported from India by British colonists who have become so numerous that indigenous Fijians like Bainimarama are only about 53-57% of the population.  Indo-Fijians are 38%, but used to have a larger share before the coup and a wave of emigration.  Reliable numbers are hard to come by, since demographics has become such an explosive source of political tension in this tiny nation of around 900,000 that census-taking has been nearly abandoned.  Bainimarama builds his support on Indo-Fijians as much as on indigenous Fijians.

Christians (mostly Methodists) make up 58% of the Fijian population, including 6% of Indo-Fijians but over 90% of the remaining population, which includes indigenous Fijians and those with origins in China, Europe, or elsewhere in Oceania.  Indigenous Fijians have only recently regained their slim majority, and the phrase “Christian state” as it is used in the latest unrest is used by indigenous Fijians resentful of the Indo-Fijian role in politics, which is still considerable.  One member of parliament, Mosese Bulitavoare, of the Social Democratic Liberal Party (Sodelpa), was charged with sedition recently for whipping up anti-Indian bigotry.  Sodelpa has found itself in the position of denying publicly any role in the current separatist movements.

Fijian Christian activists’ concerns are less focused on Hinduism, practiced by 77% of Indo-Fijians (a third of the national population), than on Islam, even though it is practiced by only 16% of Indo-Fijians and a mere 7% of Fiji’s total population.  As the soi-disant “attorney general” Kirwin, in Australia, puts it, “I’m not frightened or scared at all.  There is a takeover in Fiji and it is not a good one.  We’re concerned by Muslims.  Their influence is very, very high.” She explicitly opposes constitutional guarantees of equal rights for all Fijians, regardless of ethnic background or faith.  Fiji’s attorney general, Aiyaz Sayed-Khaiyum, has in particular been subjected to considerable vilification for his faith by some indigenous Christians.

Details on last month’s arrests are hard to come by, and are usually filtered through the government’s interpretation of events.  Late last month, Bainimarama blamed “high-profile figures” in Australia for abetting the uprising, which he blamed on “enemies of modern Fiji.”  This may be a reference to one of the Fijian Christian states’ loudest supporters, the Rev. Fred Nile, a New South Wales state legislator who heads the Christian Democratic Party (C.D.P.) and is a perpetual target of ridicule in Australian politics.  Each year Nile publicly prays for Sydney’s annual gay-pride parade to be rained on, and he has pushed for laws banning Muslim immigration, the wearing of Muslim religious dress, and not just same-sex weddings but also pagan and Wiccan ones.

Fiji is no stranger to ethnic and sectarian unrest.  In addition to several coups d’état and the tensions between indigenous and South Asian Fijians, there is recurring separatist activity on an outer Fijian island called Rotuma (1.2% of Fiji’s population), which shares more with the Polynesian culture of Samoa and Tonga than with Fiji’s Melanesian one.  And on Fiji’s Rabi Island an elders’ council of expatriates from the Republic of Kiribati’s Banaba Island, which is more Fijian than Kiribatian culturally, acts as a sort of provisional government for Banaba, where there is ongoing advocacy of either seceding as an independent state or transferring Banaba to Fiji.

Seventy alleged “Christian state” activists await trial for sedition.  Sixteen have pleaded not guilty and are due back in court on September 22nd.  Due to the repressive political atmosphere in Fiji and constraints on the press, it is not clear how true any of the allegations are.  One defense lawyer for the defendants, Aman Ravindra-Singh, has said, “We have been kept in the dark as counsel for these persons and we have yet to see any shred of evidence with regards the allegations of guns and firearms being involved in military-style training.”  Nor can we rely on any kind of pressure for due process from neighbors like Australia and New Zealand, who regard Bainimarama’s Fiji as a crucial link in the geopolitical containment of China’s naval ambitions.

The proposed Christian states on Viti Levu are dangerously intolerant and undemocratic.  The attitudes and prejudices underlying them have no place in a modern democratic nation.  But neither do the military-style policing and disregard for civil rights with which Bainimarama is trying to keep the uprising down.  Fiji’s junta may find that it is feeding the nation’s cycle of coups and counter-coups rather than stabilizing the country.

[Thanks to Olivier Touzeau for a correction on identification of flags in this article.]

[You can read more about many other separatist and new-nation movements, both famous and obscure, in my new book, a sort of encyclopedic atlas just published by Litwin Books under the title Let’s Split! A Complete Guide to Separatist Movements and Aspirant Nations, from Abkhazia to Zanzibar.  The book, which contains 46 maps and 554 flags (or, more accurately, 554 flag images), is available for order now on Amazon.  Meanwhile, please “like” the book (even if you haven’t read it yet) on Facebook and see this interview for more information on the book.] 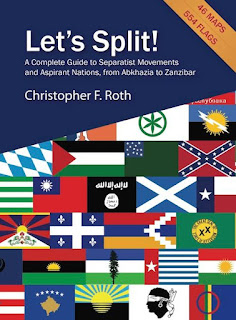