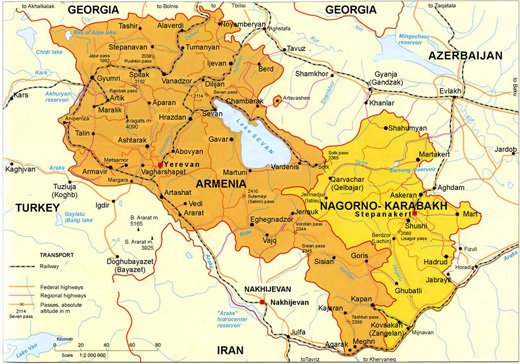 The House of Representatives of the Commonwealth of Massachusetts on August 6th adopted a resolution urging President Barack Obama and the United States legislature to “support the self-determination and democratic independence” of the Nagorno-Karabakh Republic (N.K.R.) (a.k.a. the Artsakh Republic), a part of what the international community recognizes as part of the Republic of Azerbaijan but which the Republic of Armenia invaded in the 1990s, after the fall of Communism, establishing the N.K.R. as an Armenian puppet state.  Rhode Island passed a similar resolution in May (as reported at the time in this blog).


George Aghjayan, Eastern Region chair for the Armenian National Committee of America (ANCA), a political lobbying group, said that Massachusetts’ legislature “properly understands a simple truth that the State Department has yet to grasp, namely that our federal government’s present policy toward Nagorno-Karabakh, were it in force back in 1776, would have, in the name of territorial integrity, pressed the 13 American colonies to remain part of the British Empire.”

Well, actually a better parallel would be if, during the War of 1812, the British had invaded Massachusetts with the help of Czarist Cossacks, carried out massacres and ethnic cleansing to get rid of the pro-U.S. population, relocated thousands of loyal English settlers to the territory, policed it with a heavy occupation of British and Russian troops, and then declared that Massachusetts had finally “liberated itself” from the U.S.  But who cares about facts or history when you have an ethnic constituency to please?

[Related article from this blog: “The Armenian Genocide Debate: Turkey, Nagorno-Karabakh, and the Politics of Memory.”]