That Creepy Underground Islamic Cult in Tatarstan? Turns Out It’s Just a Split-Level—and the Kids Were Fine

More information is coming out of the Russian Federation’s Republic of Tatarstan, where lurid tales emerged August 2nd (as reported in this blog) of an underground Muslim cult—no, a literally underground Muslim cult—where 27 children were reported to be liberated from a mad 83-year-old prophet’s compound, where they were kept prisoner in an eight-level honeycomb of unventilated subterranean cells, some of them without ever having seen daylight in their lives.  New information suggests that many aspects of the “cult” may have been exaggerated by media and the authorities.  The group’s headquarters, in Kazan, Tatarstan’s capital, were raided as part of a law-enforcement dragnet in response to coordinated dual assassination attempts on Tatarstan’s head mufti (a failed attempt) and his deputy (successful) (reported in this blog at the time), in what appears to be new front, in Russia’s landlocked heartland, of the kind of Islamist separatist insurgency that has kept Russia’s North Caucasus region a veritable war zone for years.  (The radical Salafist “Caucasus Emirate” movement claimed responsibility for attacking the clerics—who were moderates critical of radical Islam.  Tatarstan, which is only about 60% Muslim now, was the site of the medieval Khanate of Kazan, founded by Turkic-speaking descendants of Genghis Khan’s westward invasion of central Eurasia.  Later, during the Russian Civil War (1918-1920), Kazan was capital of the Menshevik-allied Idel-Ural State, before being subdued and crushed by Vladimir Lenin’s Red armies.) 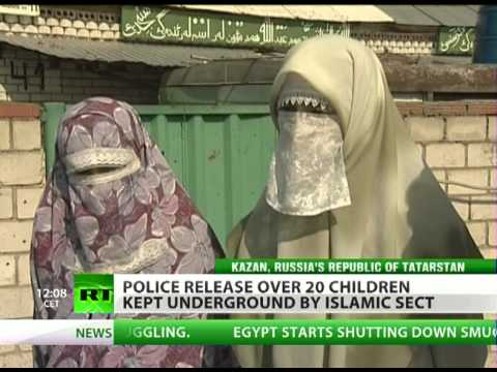 Now new footage of the interior of the compound, by media and the police, is showing none of the “anthill” type tunnels described initially.  One father of a sect member, Madganur Ziganshin, initially objected when his daughter, Ralifa Ibragimova, joined the group, but now disputes the way the group is described, saying, “They pray.  They are religious.  But they are not junkies, drunks, or bandits.  They never abuse the kids, never beat them.”  He was repeatedly allowed to visit his daughter there and never saw or heard of any tunnels, though it has become clear that the main compound is split-level and built into a hillside, which may have contributed to the characterization of some rooms as underground.

(Which is not necessarily to say they aren’t wacko cultists of some sort.  Neighbors say that the compound’s children threw stones at and cursed at other neighborhood children.  “They consider themselves a higher race, while other people are garbage,” said one neighbor.  But, hey, if they’re throwing rocks at the neighbors then at least they’re not chained up in windowless dungeons, right?  You have to take the good where you can find it.) 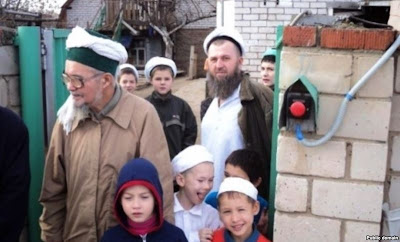 The sect, which calls itself the Muammin—“believers,” in Arabic—is what is left of a flourishing group of several thousand in the 1990s, but the increasing conviction of its leader, Faizrakhman Satarov, that he was a “messenger of God” (Islam is strict about there being no prophets other than Mohammed) led many to leave the group.  The children “liberated” are now being sent to orphanages, and many adult sect members will have the book thrown at them for child abuse.

Many now that Russian police and anti-terrorism units exaggerated the deviance of the cult and the conditions on its compound to create an impression that radical Islam was being effectively combatted (whereas in places like the Caucasus the authorities are more or less helpless: the Republic of Dagestan, for example, has been effectively ceded to Salafist warlords, while a Moscow-appointed governor runs Chechnya with, to all intents and purposes, Islamic law, mainly to appease radicals).

It wouldn’t be the first time the Russian government or the Russian mainstream media (for those who care to distinguish the two) practiced such deception.  Demonizing Islam has proved to be a very effective way to make Russia’s cowed citizens grateful for their authoritarian government.  The only mystery is why a fabrication this good wasn’t saved to be used during Vladimir Putin’s next reelection campaign.

[You can read more about Tatarstan, the Idel-Ural State, and other independence movements both famous and obscure in my new book, a sort of encyclopedic atlas just published by Litwin Books under the title Let’s Split! A Complete Guide to Separatist Movements and Aspirant Nations, from Abkhazia to Zanzibar.  The book, which contains 46 maps and 554 flags (or, more accurately, 554 flag images), is available for order now on Amazon.  Meanwhile, please “like” the book (even if you haven’t read it yet) on Facebook and see this interview for more information on the book.] 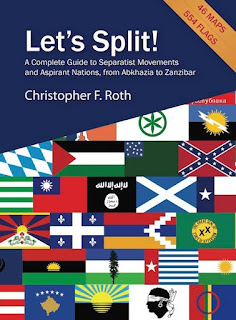