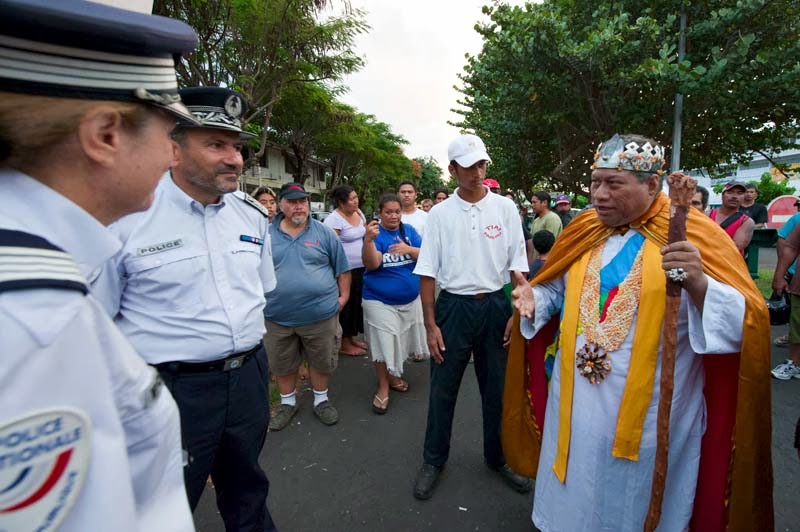 French authorities in the colony of French Polynesia on January 30th arrested a Tahitian man claiming to be a Polynesian king, for issuing a phony currency.  Shots were fired from within the king’s compound as police moved in, according to news accounts calling it an “alleged rebellion.”  In the end, five people were arrested and three firearms were confiscated, but there were no injuries.  (French Polynesia was included a month ago in this blog’s list of “10 Separatist Movements to Watch in 2014.”)

The target of the raid was Athanese Teiri, who calls himself King Tanginui I of the Pakumotu Republic (Hau Repupirita Pakumoto) despite the fact that republics, by definition, do not have kings.  He was tried in absentia on January 22nd in Papeete, French Polynesia’s capital on the main island of Tahiti, on charges of issuing a fake currency, and sentenced to six months.  Earlier, in 2012, he had received a suspended sentence for issuing illegal identity cards, and last month a follower of his Republic had gotten two months in jail for trying to buy gasoline with a 100-patu note issued by the self-styled government.

After the shots fired and firearms seized, the King and the four followers arrested with him are now in even bigger trouble.  They are being charged with attempted murder of a police officer, armed rebellion, and forming a militia, in addition to weapons possession charges.  Life imprisonment is now a possibility.

At the time of his in absentia trial last week, the defendant’s daughter, Mahina Teiri, was also given a six-month suspended sentence, on charges of defrauding the printing press producing the Pakumotu currency. 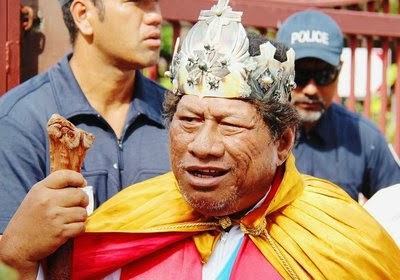 At the time of that sentence, a Pakumotu Republic spokesman reiterated his government’s June 2, 2010, declaration of independence from the French Republic.  “France no longer has authority,” said the spokesman, who was present in court along with several ministers of the republic.  “A state cannot judge another state.”

The prosecutorial moves against the Republic this month seem to have been motivated by King Tanginui’s announcement late last year that the new currency, the patu, would become legal tender on January 1, 2014, at a specified fixed exchange rate.  He even sent a formal letter to France’s Institut d’Émission d’Outre-Mer, the central bank which issues the French Pacific franc (Change Franc Pacifique, or C.F.P.), notifying it that the Pacific franc would no longer be legal tender in French Polynesia.  The C.F.P. is also used in two other French colonies, New Caledonia and Wallis et Futuna.

The Pakumotu group has been operating since 2008, when it campaigned as a political party aiming for the secession of the Tuamotu chain of atolls in French Polynesia.  Tuamotu includes the notorious Moruroa Atoll, where France has carried out nuclear tests that have poisoned the indigenous population.  In 2009, it proclaimed an independent Pakumotu Republic on the Moorea in the colony’s Society Islands archipelago and a shadow government was formed.  Mr. Teiri, initially the republic’s president, eventually called himself King (though without dropping the word republic to reflect that) and expanded his claimed realm to include all of French Polynesia.  In 2010, and again last year, the Pakumotu group tried and failed to occupy the territorial legislature in Papeete.  (Watch the Pakumotu declaration of independence here.)

In addition to Teiri’s movement, another group claims the legitimacy of the Maohi Republic (République Maohi, or Hau Repupirita Ma’ohi), declared in 1982 by a Polynesian named Tetua Mai who later was arrested when one of his bodyguards injured a police officer.  This self-proclaimed state has also attempted to issue identity cards.

A more generally acknowledged heir to the Polynesian throne, Tauatomo Mairau, died last year.  He was a member of France’s secret service and an ardent monarchist activist.

Pro- and anti-independence parties are about evenly divided in the territorial parliament, though polls show support for independence running a bit below 50%.  Indigenous people make up about three-quarters of French Polynesia’s quarter-million people. 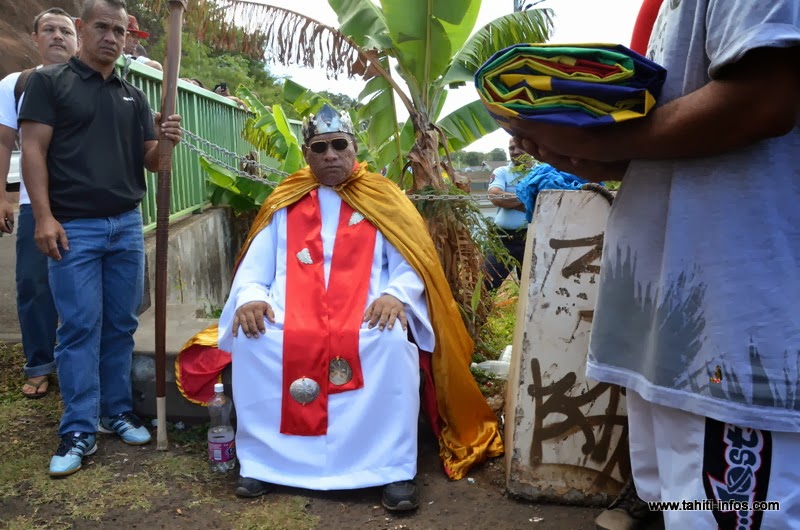 What is not yet known is whether the king’s arrest marks the end of the Pakumotu Republic.  French authorities are wondering if more armed restorationists are out there, biding their time.


Related articles from this blog:
“Easter Island Wants to Split from Chile, Join French Polynesia”
“What Is a Colony? The United Nations’ Definition Needs an Overhaul”
“10 Separatist Movements to Watch in 2014”
“France’s Far Right Wants Early Vote on New Caledonia Independence—but Only Because They’re against It”

[For those who are wondering, yes, this blog is tied in with a forthcoming book, a sort of encyclopedic atlas to be published by Auslander and Fox under the title Let’s Split! A Complete Guide to Separatist Movements, Independence Struggles, Breakaway Republics, Rebel Provinces, Pseudostates, Puppet States, Tribal Fiefdoms, Micronations, and Do-It-Yourself Countries, from Chiapas to Chechnya and Tibet to Texas.  Look for it some time in 2014.  I will be keeping readers posted of further publication news.]
Posted by Chris Roth at 7:18 AM