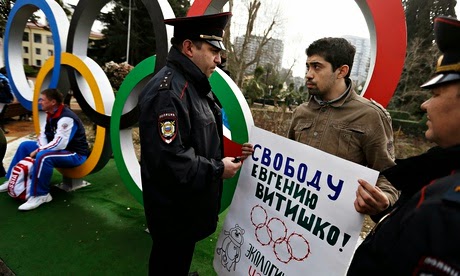 FSB Arrest, Interrogate 2 Pussy Rioters in Sochi
In the latest dispatch from Sochi, Russia, site of the Winter Olympics, two members of the persecuted punk-rock protest band Pussy Riot were arrested today (February 18th) in downtown Sochi on supposed suspicion of theft at their hotel.  (Pussy Riot was listed in this blog as no. 6 among “10 Political Causes Sure to Disrupt the Sochi Games.”)  News of the arrest came first via Twitter from Nadezhda Tolokonnikova.  She was arrested along with her bandmate Maria Alyokhina and six others, including Semyon Simonov of the group Memorial, which provides legal aid to immigrant workers on Olympic construction projects.  Tolokonnikova later told media that she and Alyokhina had been arrested the previous day as well as the day before.  On those occasions they had been detained by the F.S.B., the dreaded successor to the Soviet-era K.G.B. secret police force, and interrogated for many hours.  As Tolokonnikova tweeted, “We are in Sochi to hold a Pussy Riot action.  The song is called ‘Putin Will Teach You to Love the Motherland””—and was meant to call attention to abuses that include last week’s arbitrary arrest of an environmental critic named Yevgeny Vitishko.


Meanwhile, the International Olympic Committee (I.O.C.) has responded to requests to look into Vitishko’s arrest (as reported earlier in this blog).  The I.O.C. has decided that the labor-camp term for Yevgeny Vitishko, a critic of the Sochi games’ environmental impact, “is, and we think remains, a non-Olympic case,” in the words of the I.O.C.’s spokesman, Mark Adams.  Makes sense: he was arrested for protesting the environmental impacts of Olympic construction; what could that possibly have to do with the Olympics?  Oh, no, wait, he was technically arrested for “public profanity.”  Well, that gives the I.O.C. an out; now they don’t have to offend their gracious hosts.  Vitishko has been sentenced to three years in a labor camp.

Italian Transgender Politician Arrested at Sochi Park
But it’s not just Pussy Riot.  On February 16th, police in Sochi arrested Vladimir Luxuria, a 48-year-old transgender television host and former member of Italy’s parliament, for unveiling a banner in a park reading, “Gay is okay,” in Russian.  After being held overnight, she was released and then again arrested the next day entering the Olympic hockey arena wearing the gay-pride rainbow colors.  Olympic officials denied the arrest.  Luxuria was in Sochi to work on a television documentary on gay life in Russia.  (The gay-rights issue in Russia was listed in this blog as no. 3 among “10 Political Causes Sure to Disrupt the Sochi Games.”)

Arrests motivated by the more familiar ethnic politics of the North Caucasus and Black Sea region continue apace as well.  A leading Circassian activist was arrested on the evening of February 14th in a move that is already being criticized internationally.  The activist, Asker Sokht, who is considered a moderate, was last reported to be still in detention.  He was arrested in Krasnodar Krai, the province which includes Sochi.  His activities involved helping Circassian families fleeing Syria’s civil war resettle in Russia.  He has been sentenced to eight days in jail for “hooliganism and disobeying police.”

Circassians lived for centuries in the Black Sea coastal area around Sochi until the mid 19th century, when the Russian Empire massacred and scattered most of them in what many call a genocide.  Not quite a million Circassians remain in the Russian Federation today, while more live in a diaspora in Turkey, Syria, and elsewhere.  For the most part, Circassian activists are non-violent, unlike radical Islamists such as the Caucasus Emirate movement, who often invoke the Circassians’ plight.  Sokht is often seen, even, as a Kremlin ally.  (The Circassians were listed in this blog as no. 2 among “10 Political Causes Sure to Disrupt the Sochi Games.”) 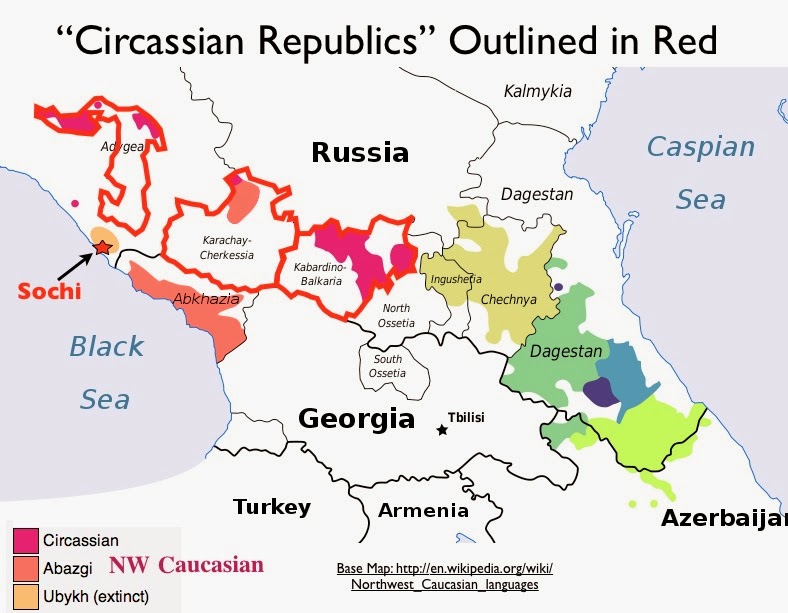 Another Circassian activist, Adam Bogus, said from Maykop, capital of the Adyghe (i.e. Circassian Republic), a sliver of land surrounded by Krasnodar Krai where Circassians are a minority, “This is deeply sad for Circassians,” adding, “ This has led a great number of people to conclude that anybody who deals with the Circassian question—even the most loyal—will now be under pressure.”  Sokht criticized last week’s Olympic opening ceremonies for not including any references to Circassians in the wide-ranging, pageant-like depiction of Russian history and culture.  An open letter to Sokht’s captors from a Circassian activist group states, “It is clear that behind the alleged hooliganism or disobeying charge against him are his critical statements about the Olympics in Sochi.”  On the day of the Sochi opening ceremonies, 37 Circassian demonstrators were arrested in Nalchik, capital of another nominally Circassian republic, the Kabardino-Balkar Republic, to the east (as reported at the time in this blog).

Russians Kill Chechen “Emir” at Dagestan Rail Station
Meanwhile, to the east in the Republic of Dagestan in the predominantly-Muslim eastern North Caucasus, a rebel fighter who called himself the “Emir of Gudermes,” was shot and killed in a shootout with police at a railway station in Sobachy, in the Khasavyurt district, it was reported on February 13th.  Authorities described him as Sheykhakhmed Baysuyev, a 41-year-old originally from Chechnya also nicknamed “Foton” who was a member of the Aukhovskaya or the Khasavyurtovskaya rebel group.  He has been on a Russian wanted list since 2005.  Gudermes is a town in central Chechnya.  It was not immediately clear if his use of an Ottoman-style title indicated that he was a member of the Caucasus Emirate movement. A previous “Emir of Gudermes,” Salman Temirbulatov, was a close associate of Aslan Maskhadov, who was rebel president of the Chechen Republic of Ichkeria during its period of de facto independence in the late 1990s, and later in exile.  A later “Emir of Gudermes,” Said-Emin Hezriev, was killed in a shootout with police in Grozny, the Chechen capital, in 2009.  That emir was associated with the Caucasus Emirate, as was another, Aslambek Vadalov.  (The Caucasus Emirate was listed in this blog as no. 1 among “10 Political Causes Sure to Disrupt the Sochi Games.”)

Also over the weekend, according to the Caucasus Emirate’s own (often unreliable) Kavkaz Center website, fighting near Bamut, Yandi, and Sunzha in western Chechnya killed five members of the insurgent “Sever/North” gang and injured another 15, while two Russian soldiers were killed and a Russian military helicopter damaged. 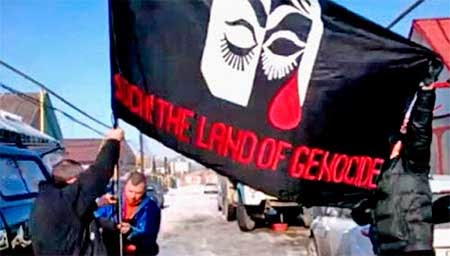 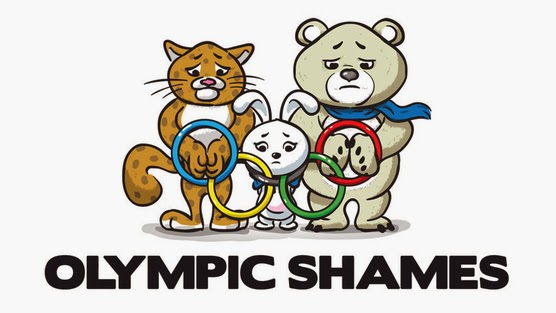