Kurds Join Hands with Turkmens & Christians in Syria; Iraq Pits Ethnicities against Each Other in North 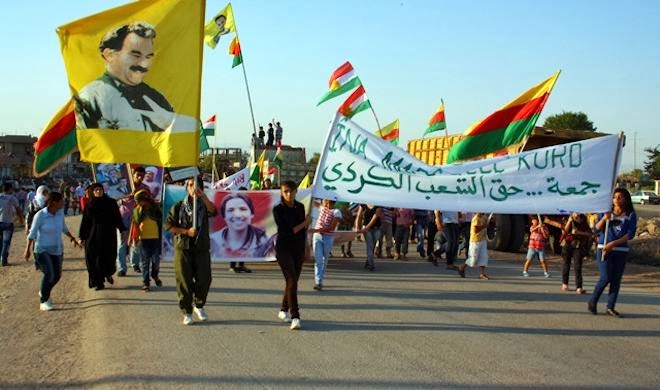 Things are getting complicated in Kurdistan.  In Rojava (“Western Kurdistan”), the newly declared autonomous region in northern Syria, a multi-ethnic spirit of cooperation is reigning, while in “South Kurdistan” (northern Iraq’s autonomous Kurdistan Region), the central government in Baghdad is using Turkmen and Assyrian autonomy as a bludgeon with which to beat back Kurdish national aspirations.  The leadership in these two parts of Kurdistan have never been farther apart.  Does the Turkish-Kurdistan rebel leader, Abdullah Öcalan, hold the key to greater cross-border unity?  Read on. 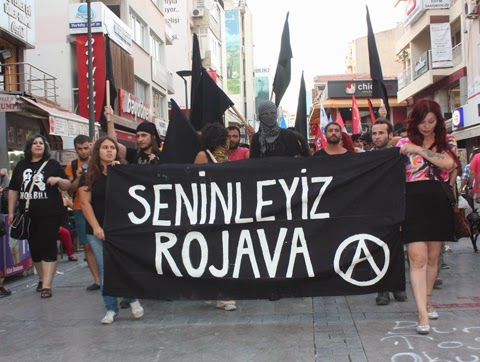 The “Geneva II” talks in Switzerland meant to bring Syrian government and rebel leaders together went, predictably, nowhere.  They were not supposed to go anywhere.  Everyone understands that unless Kurds are brought to the table—to say nothing of the radical Islamists of the al-Nusra Front and the Islamic State of Iraq and al-Sham (ISIS), which controls the upper Euphrates River valley—are brought to the table too, there is nothing really for President Bashar al-Assad and the Free Syrian Army (F.S.A.) to talk about.  What happened in Geneva was a pointless kabuki play which was more about providing a forum for the United States secretary of state, John Kerry, to put Iran in a corner and publicly dress down Assad than to do anything to end the bloodshed in Syria’s civil war.

Meanwhile, to hell with peace talks: the Kurds in northern Syria, along the border with Turkey, who make up 9 or 10% of the country’s population, declared an autonomous region in 2012 (as reported at the time in this blog) and since the late fall have been quietly building sovereign institutions there, brick by brick, the rest of the world be damned (see recent article).  And they are including other ethnic groups from the region, too, showing a spirit of cooperation seen almost nowhere else in the strife-torn Middle East.

Assad’s forces have mainly stayed out of the far north of the country, and it depends on whom you ask whether that is because of a Kurdish military rout of government forces in 2012, or because of a secret deal, with Assad deciding to concentrate his energies in the Syrian heartland while allowing the enemy Kurds to build a buffer state to protect him from a Turkish land invasion.  In any case, that government withdrawal allowed the emergence of autonomous Rojava, as the Syrian Kurdish region is known, but also opened the door for the radical Islamists of ISIS to (as reported at the time in this blog) take a string of towns along the border and disrupt Rojava’s geographic coherence.

In June 2012, the president of Iraq’s autonomous Kurdistan Region, Massoud Barzani, had brokered a deal between rival Kurdish groups in Syria’s civil war, united under the umbrella of a pro-Barzani Kurdish Supreme Council (Desteya Bilind a Kurd, or D.B.K.).  But by late in 2013, one part of that coalition, the Democratic Union Party (Partiya Yekîtiya Demokrat, or P.Y.D.), which is more or less a local chapter of Turkey’s armed Kurdistan Workers’ Party (Partiya Karkerên Kurdistan, or P.K.K.), broke away and declared a new Rojava under its authority.  This has infuriated Barzani, who has been emerging as an ally of the United States, Azerbaijan, and Turkey. 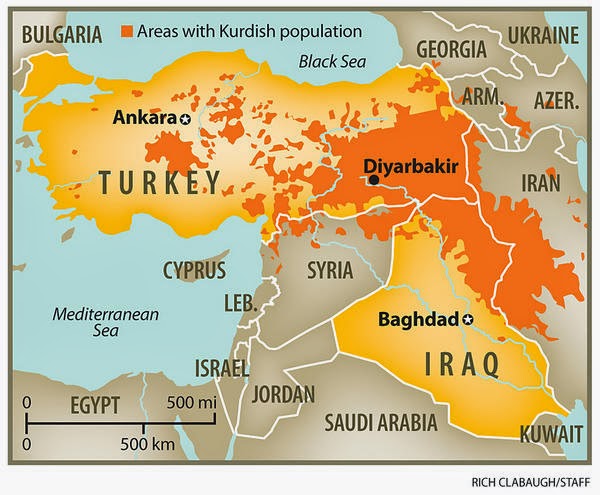 The new Rojava declared in November 2013 is composed of three autonomous “cantons”: Efrîn (Afrin) in the west, Kobanê (Ayn al-Arab), and one covering the north of Syria’s al-Hasakah province, Cizîre (Jizira, or Jazeera), which includes the notional Syrian-Kurdish capital, Qamishli.  These are explicitly set up to be multi-ethnic and multi-sectarian.  Cizîre has a Kurd, Ekrem Heso, as its president, while the two vice-presidents are a Syriac (Assyrian) Christian named Elizabet Gewriye (a.k.a. Elisabeth Korean) and an Arab named Husen Ezem.  Cizîre has 22 government ministries, including its own foreign-affairs and defense ministries.  The prime minister of Efrîn is Hevi Ibrahim, a Kurdish woman.  Two Christian organizations, the Assyrian Unity Party (A.U.P.) and the Assyrian Women’s Union (A.W.U.) are formally included in the new Rojavan administrations.

Last month, a special letter was delivered from the imprisoned leader and founder of the P.K.K., Abdullah Öcalan, to President Barzani in Erbil, Iraq, asking him to support Rojava’s sovereignty.  The letter was hand-delivered by Leyla Zana, a high-profile Kurdish member of the Turkish parliament from Diyarbakır, the notional capital of Turkish Kurdistan.  Öcalan also asked Barzani to support the peace process by which the P.K.K. is disarming and withdrawing from Turkey—and, Barzani fears, joining and strengthening the force in Rojava.  No word yet on whether this has softened Barzani’s feelings toward his Kurdish neighbors to the west, but the rivalry has complicated matters for him at home: the leadership of the opposition political party in Iraqi Kurdistan, the Movement for Change (Bzutinewey‌ Gorran), are supporting Rojava.  Gorran is angling for the vice-presidency in the Iraq’s Kurdistan Regional Government (K.R.G.).

No one, of course, is more alarmed by these developments than the Shiite-Arab-dominated government in Iraq.  (Most Kurds are Sunni.)  Baghdad fears nothing more than that the spirit of cooperation between Kurds, Turkmens, and Christians in northern Syria would inspire similar alliances on the Iraqi side of the border—creating an even vaster area that would like to split away from Iraq, not just the Kurdistan Region.  Already, the K.R.G. has been itching to annex, and in some cases de facto administering, provinces outside of the official region where Turkmens and Christians live alongside Kurds, especially in Nineveh and Kirkuk provinces—provinces rich in oil.

With this in mind, the Iraqi central government declared last month intentions to create three new Iraqi provinces.  Two of these would be designed to be ethnic homelands for Iraq’s restive non-Kurdish minorities.  The Nineveh Plain, which is the heart of traditional Assyria, would be a new province dominated by Assyrian Christians, while Tuz Khormato province to its east (now part of Saladin province) would be set aside for Turkmens—who have long demanded their own autonomous region, or even independent state, to be called Türkmeneli, just to the south of, or overlapping with, the current Kurdistan Region.  Turkmens have also been pushing, so far without success, for a role in the K.R.G. administration.  (The third new province would have its capital at Fallujah, currently in Anbar province.  This is a rather pathetic attempt to minimize the damage to Iraqi unity done by ISIS, which last month took control of Fallujah and declared it a Sunni-Arab-ruled Islamic state.  The Sunni tribes in and around Fallujah are unlikely to be very impressed with the promise of their own province while (Shiite) Iraqi bombs rain down on the city.) 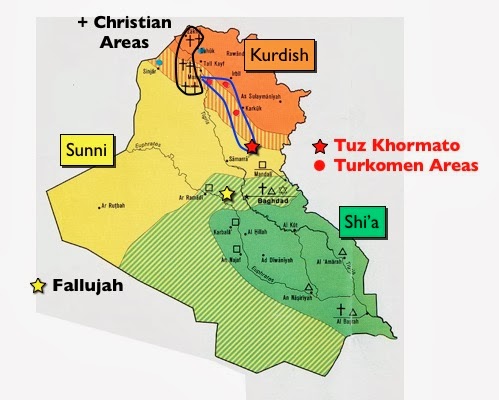 It rather looks as though Baghdad is trying to tie an ethnic noose around the Kurdistan Region, entrenching Turkmens and Christians in autonomous regions that would prevent Kurds from solidifying their control of Mosul and Kirkuk.  But Nineveh’s Sunni Arab governor in Mosul, Athil al-Nujaifi, sees an even more sinister motive.  “Reviewing the maps,” he said, “show that the two provinces proposed are located on the shortest route between Iran and Syria in Mosul.”  He said Iraq’s Shiite Arab president, Nuri al-Malaki, plans to sow sectarian division in the region, move Kurdish forces back over the border into official K.R.G. territory, and open a supply route through Iraq for weapons from Iran (a Shiite theocracy) to its allies in the (Shiite Arab) Syrian government.  Gov. Nujaifi, who fears that what he sees as the Shiite-on-Sunni war in Anbar will spread north to Nineveh, has even gone so far as to suggest that the current Nineveh province should declare autonomy from Baghdad as a Sunni Arab autonomous region.

And now there is an even further complication: it seems that ISIS and its affiliates in Syria have recruited at least 200 Iraqi Kurds into their ranks—even though Kurds on the whole tend to be socially progressive and politically moderate by Middle Eastern standards.  Their ultimate goal seems to be making Iraqi Kurdistan into an Islamic state separate from Iraq. 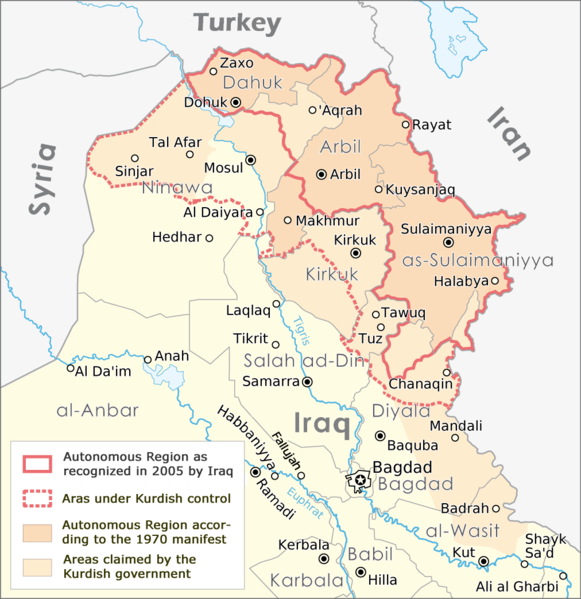 Despite all this, the Kurdish people have survived centuries of divide-and-rule tactics.  They are not about to be turned back now.  The momentum toward autonomy and independence, on the whole, seems unstoppable.  But there may be a lot of ethnic and sectarian bloodshed along the way.

[For those who are wondering, yes, this blog is tied in with my new book, a sort of encyclopedic atlas just published by Litwin Books under the title Let’s Split! A Complete Guide to Separatist Movements and Aspirant Nations, from Abkhazia to Zanzibar.  (That is shorter than the previous working title.)  The book, which contains 46 maps and 554 flags (or, more accurately, 554 flag images), is available for order now on Amazon.  Meanwhile, please “like” the book (even if you haven’t read it yet) on Facebook and see this special announcement for more information on the book.] 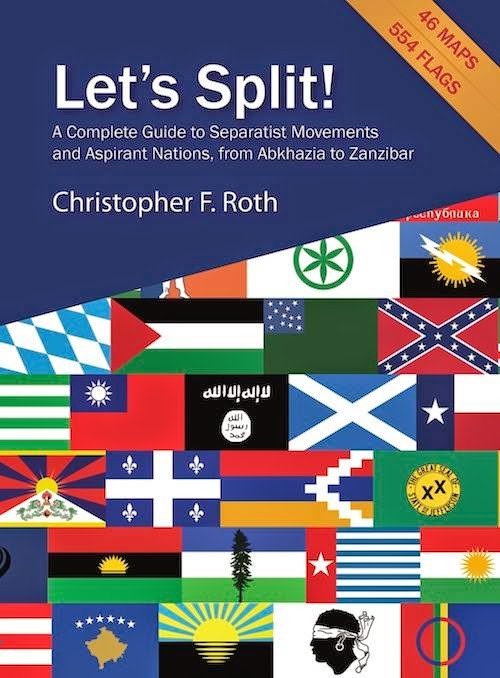