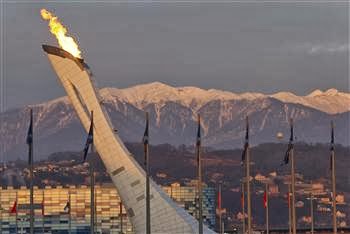 Here is the latest news from the Winter Olympics in Sochi, Russia, where politics is the most interesting spectator sport.

Islamists pray for Sochi earthquake
The Caucasus Emirate movement, which aims to separate the North Caucasus region, including Sochi, the site of this year’s Winter Olympics, as a separate Islamic state, is considered the greatest threat to the Games.  The group’s Vilayat Dagestan subdivisions claimed responsibility for the recent lethal bus bombings in nearby Volgograd, and the group has promised to send Russia’s president, Vladimir Putin, “a present” during the Olympics.  But no concrete security threats have materialized.  (The Caucasus Emirate was no. 1 in this blog’s list of “10 Political Causes Sure to Disrupt the Sochi Games.”)

On February 10th, however, the local branch of the Emirate for the Republic of Ingushetia, a Russian republic east of Sochi, veered toward the supernatural.  An announcement on the Ingush branch’s website asked the faithful to pray for an earthquake to devastate Sochi during the Olympics.  The Emirate movement, as well as more moderate Circassian nationalist groups, have condemned the Russian decision to hold the Games near the site of a genocide of predominantly-Muslim Circassians, exactly 150 years ago this year.  (The Circassian genocide was no. 2 in this blog’s list of “10 Political Causes Sure to Disrupt the Sochi Games.”)

The Emirate’s appeal read, in part, “All who are able to read this letter can supplicate that the Almighty destroys the land in Sochi with an earthquake, and makes the infidels ‘drunk of water’ before Hell and drown in a flood!”  It added, “The Games of the atheists and pagans!  The pigs are so arrogant that they decided to host the Games on the ground where our ancestors shed their blood to defend Islam and Muslims.  Even the blind can see it!”  The statement concluded, “May Allah give the infidels in Sochi the last earthquake of their lives.”

No seismic activity has as yet been detected.

Gay-pride flag raised—sort of
There was a brief kerfuffle after the Games’ opening ceremony on February 7th, when some international media openly interpreted the gloves worn by Greece’s national team as using differently colored fingers in reference to the gay-pride flag (technically, the LGBT flag).  This was seen as a middle finger—a yellow middle finger!—to the host country, Russia, and its draconian anti-gay laws (which were no. 3 in this blog’s list of “10 Political Causes Sure to Disrupt the Sochi Games”).  Greece, after all, because of the openly homoerotic culture of ancient Athens, is practically synonymous in the wider world with homosexuality (we’ve all heard of Lesbos), though nowadays it is far tougher to be gay or lesbian in the Balkans than in northern Europe. 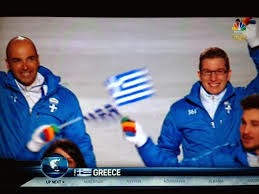 Greek officials pointed out, however, that the colored fingers corresponded to the five colors of the Olympic rings (see more below on that) and not the gay-pride flag.  Germany’s team also wore rainbow colors in its opening-ceremony uniforms, but corresponding neither to the gay-pride or Olympic color arrays. 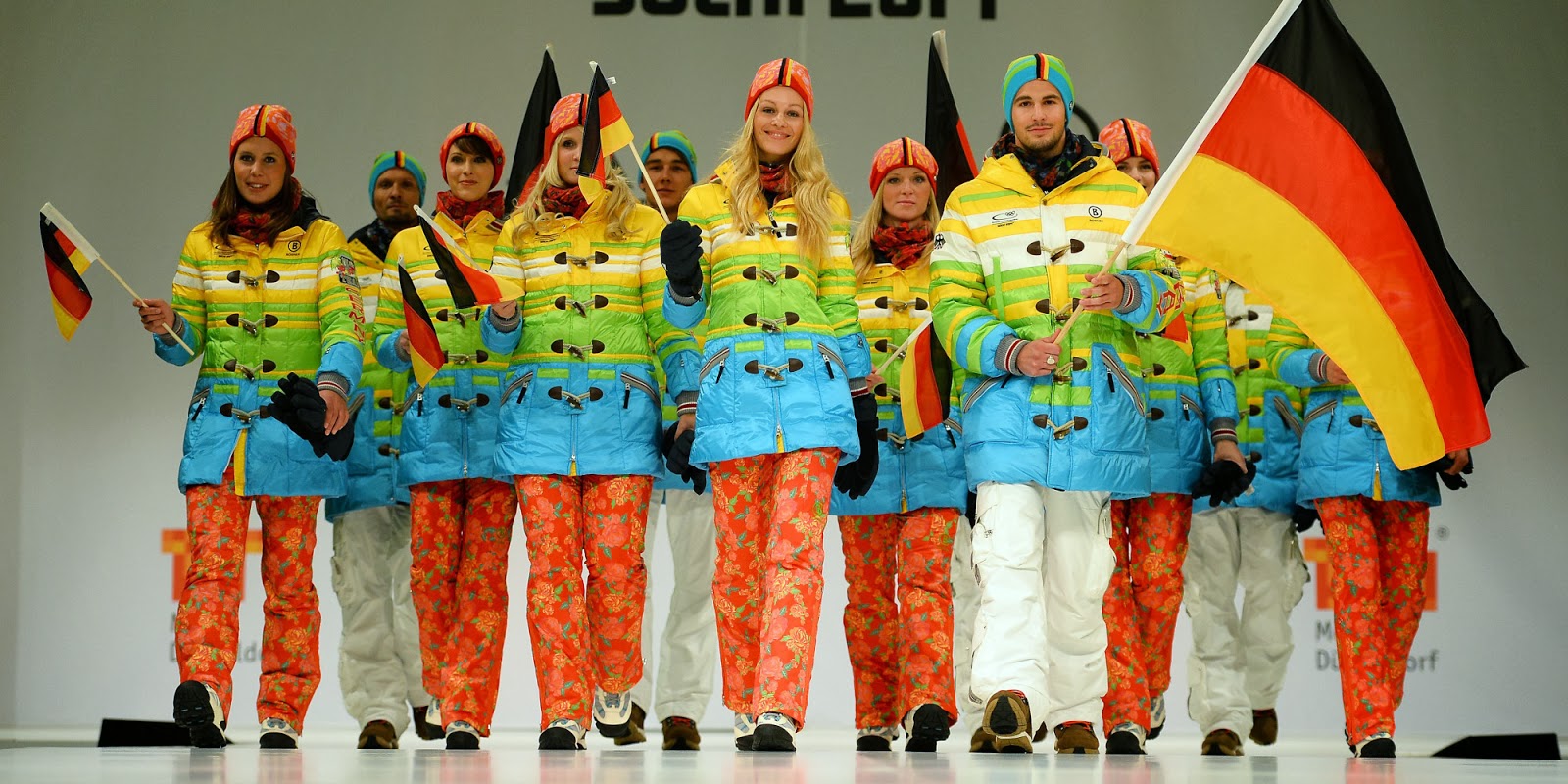 The most serious flag controversy of the Olympics so far, however, has been far from Sochi, in Calgary, Alberta, in Canada.  There, the city has been divided over the question of whether to fly the gay pride flag during the Olympics.  Many Canadian city halls are doing this as a protest of the Russian Federation’s new anti-gay legislation.  These include those in Edmonton, Montreal, Quebec City, Regina, St. John’s, Toronto, Vancouver, and the national capital, Ottawa.  The attack on Calgary’s use of the flag has been led by Jerry Joynt, a member of the Olympic organizing committee back in 1988, when Calgary hosted the Winter Olympics.  Media have also lodged criticism.  The mayor of Calgary, Naheed Nenshi, has nonetheless defended the decision; which flags fly are ultimately his decision.  When a city official took the occasion of Nenshi’s visit to a conference in London to announce that the flag was coming down, Nenshi telephoned from London to overrule him.

Alberta, often called “the Texas of Canada,” is the epicenter of fundamentalist religion and social conservatism in Canada—a country where religion otherwise, certainly when compared with the United States, plays very little role in public life.  Nenshi, the first Muslim mayor of a major North American city, whose parents were members of Tanzania’s diaspora South Asian community, is locally regarded as very liberal and is a vocal champion of gay and transgender rights.  His house was vandalized in 2010 on the anniversary of the September 11, 2001, terrorist attacks, and he has faced a barrage of criticism from extremist Christian activists.

Ideally, Nenshi says, he would like the Olympic and gay-pride flags to fly side by side outside city hall.  But any flying of the Olympic flag anywhere needs to be authorized by the International Olympic Committee (I.O.C.), and they have not done so.  Nenshi generously says that official permission must be bogged down by red tape, but is the real reason that the I.O.C. does not want to offend this year’s Olympic hosts by having the gay-pride and Olympic flags flying together in an Olympic city?

And, of course, we are still awaiting word on whether anyone in Sochi has spotted the flag of the Jewish Autonomous Oblast, a constituent unit of the Russian Federation—originally Josef Stalin’s Siberian dumping ground for troublesome Jews—whose flag so resembles the gay-pride flag that last year (as reported at the time in this blog) officials had to issue specific statements outlining their differences.

Russia puts racial categories back into Olympic symbol
Though there have been few flag kerfuffles in Sochi, there is some controversy over the way that Russia’s Olympic organizers have been displaying a monument in Sochi featuring the Olympic rings.  The five rings representing the Olympics are generally assumed to represent the number of continents in popular conception at the time—and indeed European schoolchildren, for example, still learn that there are five continents.  (To explain this to Americans: they lose Antarctica—no one lives there anyway—and merge North and South America.)  While it is true that the number five was originally chosen to represent the continents, there is no truth in official Olympic rules or in original intent to what has by now become the common popular interpretation: that the different colors of the rings indicate which of the five continents they represent.  The founder of the Olympics, Baron Pierre de Coubertin, intended the colors to represent the different colors in all of the flags represented at the first modern Games in 1896: “the blue and yellow of Sweden, the blue and white of Greece” (note: white is the Olympic flag’s background), “the tri colors of France, England, and America,” etc.  (England’s flag is a two-colored St. George’s Cross: like most Frenchmen, the Baron did not know the difference between England and the United Kingdom, but never mind that.) 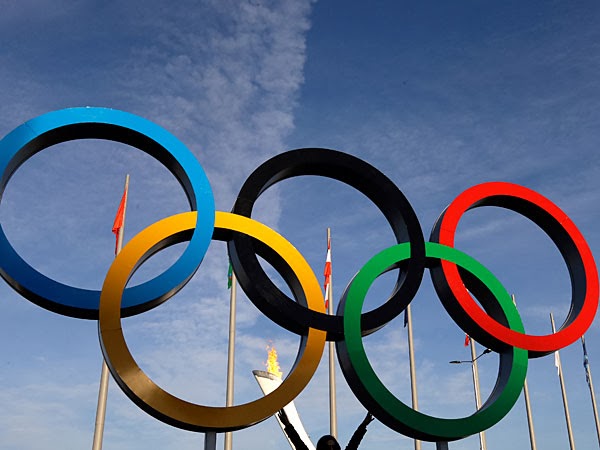 Nonetheless, the rings as they appear prominently on an Olympic monument in Sochi are labeled by continent: yellow is Asia, black is Africa, blue is Europe, green is Australia, and red are the Americas.  This has caused some complaints.  However, a similar official display at the 2000 Summer Olympics in Sydney, Australia, also featured continent-labeled rings.

Georgia warns Olympic guests away from Abkhazia
The foreign ministry of the Republic of Georgia on February 12th asked visitors to the Winter Olympics not to visit the nearby Republic of Abkhazia, which functions as a Russian puppet state separate from Georgia but most of the world—other than Russia and four other nations—regards as Georgian territory.  Russia and Georgia cut off diplomatic relations after a 2008 war in which Georgia tried to reclaim Abkhazia and another de facto independent puppet state, South Ossetia.  Georgia came close to boycotting the Olympics this year.  Georgia calls the Russian effort to lure Olympic tourists to Abkhazia “a provocation aimed at undermining the sovereignty and territorial integrity of Georgia.”  But an I.O.C. spokesman, when asked about tourism to Abkhazia, said, “Why not?”  He added, “ The talks and exchanges between the two governments, that’s entirely been to the two governments. In terms of going to Abkhazia ... well if it’s safe, people will go there.”  (Abkhazia and South Ossetia were no. 5 in this blog’s list of “10 Political Causes Sure to Disrupt the Sochi Games.”) 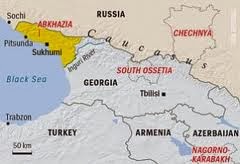 Environmental activist sent to labor camp
The public outcry over this week’s sentencing of Yevgeny Vitishko, a 40-year-old geologist critical of the environmental damage done by the Sochi Olympics, has increased in recent days.  The I.O.C. has demanded an explanation, and Human Rights Watch (H.R.W.) has condemned the move as well.

Vitishko was first arrested in 2011 for “hooliganism” when he and other members of his group, Environmental Watch on North Caucasus, broke through an illegal fence erected in a public forest.  When the activists discovered evidence of illegal logging of protected species, some members of the group spraypainted on the fence, “This is our forest.”  The trouble was, the fence was considered part of the summer home of Aleksandr Tkachev, governor of Krasnodar Krai.  Vitishko was sentenced to three years’ labor in a penal colony, pending appeal.  Then, last week, when he was on his way to speak to reporters in Sochi about his case, he was (as reported in this blog) arrested for using profanity at a public bus stop and taken away for a 15-day jail term.  A legal appeal of his sentence failed on February 12th.  Yulia Gorbunova, of H.R.W., said, “The case against Vitishko has been politically motivated from the start. When the authorities continued to harass him it became clear they were trying to silence and extract certain retribution against certain persistent critics of the preparations for the Olympics.”

Governor Tkachev, a certified ultranationalist loon, has been in the news before.  As governor of the jurisdiction which includes Sochi, he has been among those most outspoken in casting the security threats to the Olympics as a racial problem.  It was he who (as reported at the time in this blog) first invited Cossack troops to patrol both Sochi and Krasnodar Krai as a whole, promising local police that “what you can’t do, the Cossacks can”—while also reassuring rights groups that Cossacks do not carry firearms, only whips (phew!).  There are 1,000 Cossacks in full uniform currently patrolling Sochi.  Tkachev has also called for Cossacks to expel North Caucasus minority groups, who are predominantly Muslim, from the province.  He referred to the region as “crawling” with Caucasus people who he said “make ethnic Russians feel like strangers in their own country.”  Nor is he ignorant of the fact that the minorities in question are the indigenous peoples of the region and that Russia brutally conquered the territory only a few generations ago.  He is a foremost proponent of Putin-era Russia’s fascist-style worship of authority and the ideology of “might makes right” on which modern Russia’s authoritarian regime is built.

Related articles from this blog: