I admit it.  I think politics is the only interesting spectator sport at the Olympics.  Here’s the latest:

Ukrainian hijacking
Authorities in Turkey have confirmed that a drunk Ukrainian man who (as reported at the time in this blog) tried to hijack a plane to Sochi during the opening ceremonies acted alone.  The Pegasus Airlines flight from Kharkov, Ukraine, to Istanbul, landed in Istanbul anyway and the man was arrested without incident.  His claim that a bomb was on the plane was false.  However, there was a political connection: the would-be hijacker, Artem Hozlov, age 45, said that his demands included the release of Ukrainian “hostages”—a reference to arrested anti-government protestors.  And he said he wanted to go to Sochi because that was “where Vladimir Putin and Viktor Yanukovych are meeting, both of whom have blood on their hands.”  (Ukraine was listed in this blog as no. 4 among “10 Political Causes Likely to Disrupt the Sochi Games.”)

Dagestan
Meanwhile, the insurgency just east of Sochi in Russia’s predominantly-Muslim North Caucasus region, continued apace.  In Makhachkala, capital of the ethnically diverse Republic of Dagestan, Russian special forces killed five militants and arrested a sixth in a house raid on February 8th.  The group’s leader, Alexei Pashentsev, was an ethnically Russian convert to Islam, an increasingly common phenomenon in the Muslim insurgency.  The five were linked to the Buynayksk gang, one of a whole network of warring drugs and weapons smuggling gangs who are interlaced with the Caucasus Emirate movement’s separatist insurgency in Dagestan and other republics (listed in this blog as no. 1 among “10 Political Causes Sure to Disrupt the Sochi Games”).  But there is not necessarily any link between this incident and the Olympics—or with last year’s bus bombings in Volgograd, for which the Dagestan branch of the Emirate claimed responsibility.

Abkhazia and South Ossetia
It was decided early on that Abkhazia and South Ossetia, two “sovereign” puppet states carved by Russian forces out of the northern flank of the Republic of Georgia, would not compete as independent states in the Olympics (as reported on in this blog recently).  After all, only five nations in the world recognize them—Russia, Nicaragua, Venezuela, Nauru, and Tuvalu.  (Even Belarus has better sense.)  This has infuriated Abkhaz and Ossete nationalists, even those who realize that this a snub from the International Olympic Committee (I.O.C.), not from Russia.  Attention then turned to whether Georgia would boycott the Olympics, but they haven’t, even though Georgia and Russia have no diplomatic relations.  Georgia was infuriated by Russia’s decision to extend its Sochi “security perimeter” into Abkhazian—and thus, as far as most of the world is concerned, Georgian—territory.  Two days before the opening ceremonies, the former prime minister of Denmark and current secretary general of the North Atlantic Treaty Organization (NATO), Anders Fogh Rasmussen, expressed indignation at that move, saying, “ We have noted the recent decision to temporarily extend the so-called border zone of Abkhazia further into Georgian territory without the Georgian government’s consent.  We are very concerned about that decision.”  (“Concern” is cheap.  NATO stood by and yawned in 2008 when Russia invaded its Georgia—an official partner, but not member, of NATO—in the South Ossetia War.)

One dicey issue was what to do in the case of the maps of different nations projected on the large screen as national teams entered the arena on February 7th in the opening ceremony.  When Georgia’s team came in, the map of Georgia shown had very convenient clouds covering Abkhazia and South Ossetia, thus dodging the issue entirely.  For the citizens of these forgotten nations—and for the Georgians ethnically cleansed from their territories when they were created—that must have been a cloudy omen of a different kind.

Observers waited to see whether the two quasi-states would be treated as independent in other, more subtle symbolic ways at the Games.  (Nearly all Abkhazians and South Ossetians hold Russian passports, so it is easy for them to compete as athletes.)  Abkhazia’s president (and Soviet-era K.G.B. chief), Alexander Ankvab, and South Ossetia’s president, Leonid Tibilov, attended the opening ceremonies but not as “official guests” of either the Russian Federation or the I.O.C.  But they held some diplomatic-style meetings—with each other and, rather chillingly for those who think their puppet-state status is a mere prelude to annexation by Russia, with Leonid Slutsky, who chairs Russia’s parliamentary committee on Commonwealth of Independent States (C.I.S.) and Eurasian integration.  There has, after all, been talk of the two republics joining Russia’s nascent customs union with Belarus, Kazakhstan, and possibly Armenia—the very trading bloc which is the opposite pole to the European Union (E.U.) in Ukraine’s ongoing political divide over the country’s geopolitical orientation.  (Abkhazia and South Ossetia were listed recently in this blog as no. 5 among “10 Political Causes Sure to Disrupt the Sochi Games.”)

Pussy Riot
While Russia and hundreds of athletes are making headlines in Sochi, the country’s most famous dissidents are making headlines in the West.  Two members of the persecuted punk band and political collective Pussy Riot met in NewYork with the city’s mayor, Bill de Blasio, and his wife.  Among the topics discussed were prison reform.  The two women, Nadya Tolokonnikova and Maria Alekhina, said they were interested in visiting some American prisons.  Their visit to the United States comes 50 years, nearly  to the day, after the Beatles’ appearance on The Ed Sullivan Show.  Does this mean that they are heralding a pop-music “Russian invasion”?

Next, in Berlin, Germany, Tolokonnikova and Alekhina visited the Reichstag and the Berlin Film Festival and indicated they were considering a run for office, in Moscow’s municipal legislature.  (Pussy Riot was listed in this blog as no. 6 among “10 Political Causes Sure to Disrupt the Sochi Games.”) 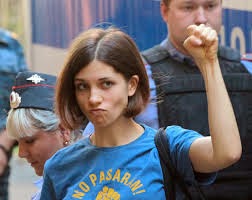 Gay rights
Expressions of solidarity with Russia’s persecuted gays and lesbians (no. 3 in this blog’s list of “10 Political Causes Sure to Disrupt the Sochi Games”) have been so far muted at these Games.  After all, wearing anything ideological like a rainbow flag on an Olympic uniform is forbidden under I.O.C. rules.  But there have been a few exceptions in other areas.  Brian Boitano, the U.S. figure-skater who created shockwaves of surprise by coming out as gay last month, was in Sochi and was giving interviews on gay rights and issues.  And Iceland’s minister of science, education, and culture, Illugi Gunnarsson, attended the opening ceremonies wearing a rather fetching “gay pride” rainbow tie.