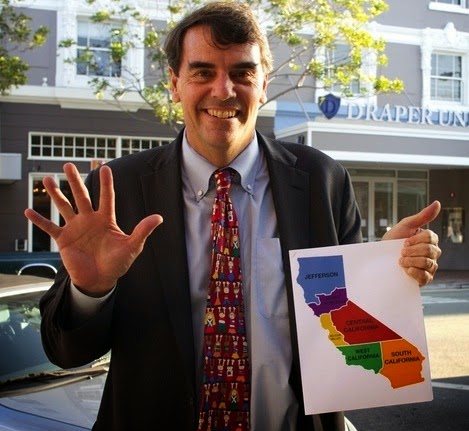 In December, when the Silicon Valley entrepreneur Tim Draper suggested splitting California into six separate states, it seemed like a pie-in-the-sky side show to the more serious movement gaining steam in the state’s far north, to create a separate State of Jefferson.  But Draper’s “Six Californias” idea has just got a sort of thumbs-up—from Sacramento, no less.  A 16-page report drafted for the California legislature concludes that splitting the Golden State into pieces is “clearly legal and doable.”


Draper may be best known to the general public as Principal Schmoke on the teen situation comedy The Naked Brothers Band, but in tech circles he is heir to a high-profile venture-capital dynasty.  Silicon Valley’s discontent with California’s corporate regulations and its redistribution of tax revenue from the wealthiest areas to the poorer, more remote ones has been discussed in this blog recently—notably with the San Francisco genetics entrepreneur Balaji Srinivasan planning the Valley’s “ultimate exit” from the state by some means or other, as well as organizations like the Seasteading Institute which want to set up floating free-market cities off the California coast outside United States jurisdiction.  But Draper’s solution is more old-fashioned, following a state-secession trend going back to Ethan Allen and his Green Mountain Boys, who sliced a new state, Vermont, out of New York’s western flank in the colonial period.


Draper’s “Six Californias” plan includes a State of Silicon Valley, which would include the San Francisco Bay area and points south; a State of North California running in a thick band from Napa Valley to Lake Tahoe; a State of Jefferson composed of the state’s 14 northernmost counties; a primarily agricultural State of Central California centered on Fresno; a State of West California, stretching from San Luis Obispo to Long Beach, including liberal Los Angeles; and a State of South California composed of some of the inland, conservative, desert states that a Riverside County politician (as reported in this blog) is already trying to form, with a coastal toehold at San Diego and the Republican Party stronghold of Orange County.

The current state of California, the most populous in the U.S. and the most diverse in terms of ethnicity, landscape, and local economy, is, according to Draper, “ungovernable.”  There is already a movement to gather the necessary 1 million signatures which will put the proposal on the ballot in November.  The report, which was prepared by a legislative expert, Mac Taylor, and a financial specialist, Michael Cohen, notes that the states of Silicon Valley and North California would each have a higher per capita income than California’s current $46,477.  In fact, Silicon Valley would surpass Connecticut and become the state with the highest average income.


Draper says the highest interest in the “Six Californias” proposal is in the areas that would be Central California and the State of Jefferson.  The problem is that which counties want to be in Jefferson (listed in this blog as one of “10 Separatist Movements to Watch in 2014”) is being sorted out right now at the grass-roots level, without waiting for a top-down partition by any city-slicker millionaire technocrat.  To date, the boards of supervisors in Siskiyou and Modoc counties have voted in favor of secession, and Siskiyou and Tehama will put the question before voters in June.  Other counties are considering it, and in Siskiyou there is even going to be an alternate ballot initiative to create a sort of sovereign “Republic of Jefferson” within Siskiyou County’s territory. 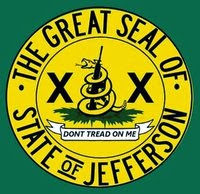 But ultimately, the problem is that Draper is approaching the alleged problem of California’s ungovernability like a businessman, not a politician, and it will be politics that will decide, all on its own, whether to partition the state.  Just for the sake of argument, even if the U.S. Congress did agree to a subdivision of California that, let’s say, maintained the same balance between Republicans and Democrats in the Senate, that still doesn’t tell us why California Democrats, who already control the largest state in the U.S., would settle for a smaller place to run.