Shifting Alliances in the Kurdish Struggles

There is a new twist to the convoluted of politics in the Kurdish Spring uprisings (following up on last week’s long blog article on the Kurdish question as well as a host of Kurdish updates in the most recent “Week in Separatist News”).

Members of Syria’s Kurdish minority who have been left out of the Free Syrian Army (F.S.A.) for their perceived loyalty to Bashar al-Assad’s embattled regime have apparently decamped to Iraq’s autonomous Kurdistan region where they are receiving military training in secret camps.  This intelligence comes from an Arabic-language Kurdish website’s announcement on March 29th.  The training camps are shrouded in secrecy, but it is hard to imagine that they are operating without at least the tacit approval of the United States government, which still maintains a military presence in Iraq and which has irked Turkey by continuing to support the Kurdish Regional Government (K.R.G.) in Iraq. 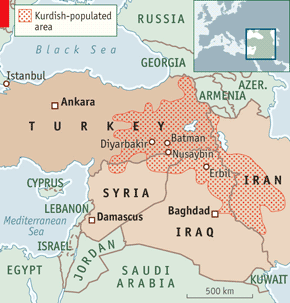 The F.S.A. has refused to support a Kurdish autonomous region within Syria, probably fearing that such a region might become a haven for Assad supporters.  Syria’s Kurds have a complicated history with their government.  Mostly descended from refugees from Turkey’s nearly-century-long brutal war against its own large Kurdish minority, Syrian Kurds, who make up 9% of the population, were denied citizenship for much of the Assad dynasty’s rule.  Nonetheless, Assad’s father and predecessor as dictator, Hafez al-Assad, supported Turkey’s banned militant Kurdistan Workers’ Party (P.K.K.) through the 1990s, resulting in a near-war in 1998.  When the uprising against the Bashar al-Assad regime began last year, Assad, fearing a Kurdish component to the revolution, bought off the Kurds by granting them their long-overdue citizenship rights, and since then Kurds have been notably absent from the uprising.  More recently, the Turkish government, as it has shifted strongly in favor of the F.S.A., has accused the current regime of reviving its support for the P.K.K.  It is hard to imagine that destabilizing Turkey is a priority for the Syrian regime today; the accusations are, in my opinion, likely to be a concocted pretext for Turkish military intervention against Syria.  Nonetheless, the P.K.K. have indeed sided with Assad and have been intercepting any F.S.A. fighters who wander over the border into Kurdish-controlled parts of southeastern Turkey and turning them over to Assad’s regime.  And the P.K.K. has threatened to turn all of Kurdistan into a war zone if Turkey carries out its complicated incursion into Syria to create a Kurdish-region security buffer zone to keep refugees of all kinds out of Turkey.  (See my blog article on ethnic and sectarian dimensions to Syria’s civil war.) 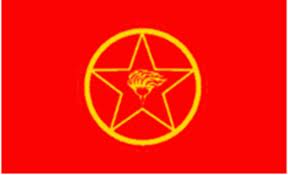 Flag of the Kurdistan Workers’ Party

Clearly, there is a split within the Kurdish community in Syria.  Mostly sequestered in remote mountain areas, a majority of Syrian Kurds at the outset probably thought they could wait out the uprising and remain on Assad’s good side if (as originally seemed likely) the rebellion was squashed.  Now that it seems it won’t be, it is turning out to be too late to ingratiate themselves with the F.S.A.  Early on, Kurdish demands for an autonomous area could have dovetailed with the mostly Arab opposition’s goals of weakening Assad, but by this point such an autonomous area must look to the F.S.A. like the creation of a potential redoubt for Assad loyalists.  Syrian Kurds who fiercely opposed Assad all along must be sorely frustrated with that sequence of events and are now turning to Iraqi Kurdistan as a way to arm themselves.  Because whoever wins the current civil war in Syria will have a grudge against Syria’s Kurds, so they are more highly motivated than ever to defend themselves.

What is most surprising is that the K.R.G. in Iraq is doing something so likely to anger not only the Turkish government but both major sides in the Syrian civil war.  Iraq’s Kurds have always had closer political and cultural ties with Kurds in Iran than with those in Turkey or Syria.  The K.R.G.’s president, Massoud Barzani, is the son of Mustafa Barzani, who headed a brief-lived Kurdish Republic of Mahabad in what is now northwestern Iran in the 1940s.  In fact, relations between the P.K.K. and the K.R.G. have been strained at times.  The K.R.G. has allowed the Turkish government to make incursions into Iran to root out P.K.K. fighters, mostly to keep their American overlords happy during the long U.S. occupation, and the P.K.K. because of that do not entirely trust Barzani.  But the recent uprisings and near-all-out war between Kurds and Turks in Turkey may be leading Barzani to think that he will need to befriend at least some components of what may turn out to be an independent or much more autonomous Kurdistan to his west.  Ultimately, the shared abstract goal of all Kurds is to have a united homeland out of chunks of Turkey, Syria, Iraq, and Iran.  The K.R.G. has the closest thing there has been to an independent Kurdistan since the 1940s, and it is becoming more and more assertive in separating itself from the authority of the Shi’a-dominated central government in Baghdad.  Barzani knows that any new autonomous Kurdish entity to the west will need to cooperate with him. (See my blog article on the prospects for Iraqi partition.)

But how much does the U.S. approve of, or concretely suppors, Barzani’s training camps?  Probably, for the time being, President Barack Obama may be gambling that anyone willing to fight Assad is worth supporting for the time being.  And, although Obama has lent the Turkish government Predator drones to kill Kurds in the Turkish mountains, Turkey has been drifting away from the West diplomatically over the past decade—partly over the U.S. establishment of the K.R.G. in 2005, partly because the European Union is still blocking the admission of Turkey because of its Medieval human-rights record.  Obama clearly feels he does not have to cater to Turkey as much as was necessary during the Cold War, when Turkey was geopolitically pivotal, the one North Atlantic Treaty Organization member state abutting the Soviet Union (not counting Norway’s minuscule Russian border).

But will Obama or his successor be ready for what happens the morning after Assad’s defeat, when a vast, emboldened peshmerga army stands ready to start building an independent Kurdistan?  In my opinion, Obama should call his drones back, tell Turkey to take a hike, and make sure that a future Kurdistan is united and democratic and supported by the international community.  More likely, we will see lots of covert half-measures that support different sides of the various Kurdish conflicts.  But when Kurdistan is independent, it will remember who its friends were. 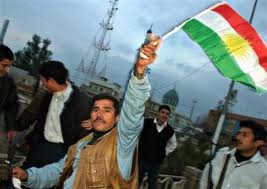