Death Toll in Hakkari Battles between Turks and Kurds Rises to 43.  The death toll from three days of Turkish airstrikes and ground operations against separatist Kurdistan Workers’ Party (P.K.K.) fighters in southeastern Turkey’s Hakkari province which began November 8th (as reported last week in this blog) were raised by the 10th from 13 to 42.  One Turkish soldier was killed, with much of the fighting concentrated in and around Şemdinli, site of a massive ground battle between Turkey and the P.K.K. earlier this year.  Meanwhile, the Turkish military reported on November 14th that two P.K.K. field commanders had been killed along with seven other P.K.K. militants.

Kurdish Mayor, 5 M.P.s Join 700 Hunger Strikers in Turkey.  Six prominent Kurdish politicians in Turkey this week joined the massive hunger strike calling for improved conditions and rights for founder of the Kurdistan Workers’ Party (P.K.K.), Abdullah Öcalan, among other demands.  The politicians include Osman Baydemir, the mayor of Diyarbakır, Turkish Kurdistan’s notional capital, who is the source of the information on the other five.  The others are members of Turkey’s parliament from the pro-Kurdish Peace and Democracy Party (B.D.P.): Sırrı Süreyya Önder, Gültan Kışanak, Aysel Tuğluk, Adil Kurt, and Sabahat Tuncer.  About 700 Kurdish prisoners have been hunger-striking for about two months (as reported on last week in this blog).  Meanwhile, police say that a Kurd from Iran who was one of two P.K.K. members arrested in Hakkari province this week has confessed that he was part of a team that planned to set off bombs in case one of the hunger-strikers should die.

2 Kurdish Civilians Killed in Turkish Airstrike in Iraq Last Week Were Iranian.  The autonomous Kurdistan Regional Government (K.R.G.) in northern Iraq has released more information about the two civilians killed in a November 6th airstrike by Turkey over the border into Iraq, ostensibly to root out rebels from Turkey’s banned separatist Kurdistan Workers’ Party (P.K.K.).  The two were Kurds from Iran, aged 19 and 45, who were in Iraqi Kurdistan on a business trip.  A Kurd named Abubakir Khidr, of Besta village, described the scene: “We were sleeping during the strike and when we woke up we were covered in blood.  Two men died right away and we were injured.  The other man with me ended up losing a leg.”  The head of the village, Said Hussein Ali, added, “The Turkish planes targeted a small shop where Iranian and Iraqi Kurds have conducted business for years.”

Bombings at Iraqi Kurdish Party Offices in Kirkuk Kill 5, Hurt 4.  Five people were killed and four injured on November 14th by bombings outside the offices of a Kurdish political party in Kirkuk, a Kurdish-dominated area in northern Iraq that lies outside the autonomous Kurdistan Region.  The first bomb was planted in a car; the second was set up to detonate after police gathered in response to the first explosion.

Kurds Take 4 Towns; Syrian Province Now in 3-Way War with Kurds, Regime, F.S.A.  The London-based Syrian Observatory for Human Rights reported on November 10th that Kurds in northern Syria have taken over three more towns to add to what they are calling a West Kurdistan Autonomous Region which they hope, after the civil war’s end, to make into an at least quasi-independent entity along the lines of northern Iraq’s Kurdistan Regional Government (K.R.G.).  The towns—Derbassiye, Tall Tamr, and Amuda, all near the border with Turkey—were abandoned by regime forces after being surrounded by fighters from the Democratic Union Party (P.Y.D.), which is affiliated with Turkey’s banned separatist Kurdistan Workers’ Party (P.K.K.).  A fourth town, Derik, was liberated by Kurds on November 13th.  This leaves almost all of Syria’s Hasakah province outside the regime’s control.  But on November 12th fighter jets and helicopters loyal to Bashar al-Assad’s embattled dictatorship attacked the Hasakah town of Ra’s al-’Ayn (called Serêkanî in Kurdish), one controlled mostly by the opposition’s Sunni-Arab-dominated Free Syrian Army (F.S.A.), killing 18 people, including six Kurds, and injuring scores.  The other 12 included seven members of the Nusra Front, an opposition paramilitary linked to al-Qaeda.  Kurds in the area have accused the Turkish government of backing F.S.A. encroachment into Kurdish-controlled areas. 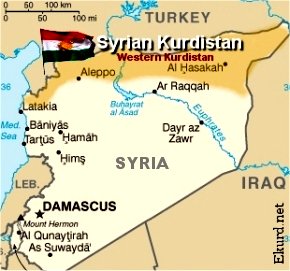 [Also, for those who are wondering, yes, this blog is tied in with a forthcoming book, a sort of encyclopedic atlas to be published by Auslander and Fox under the title Let’s Split! A Complete Guide to Separatist Movements, Independence Struggles, Breakaway Republics, Rebel Provinces, Pseudostates, Puppet States, Tribal Fiefdoms, Micronations, and Do-It-Yourself Countries, from Chiapas to Chechnya and Tibet to Texas.  Look for it in spring 2013.  I will be keeping readers posted of further publication news.]
Posted by Chris Roth at 7:49 AM