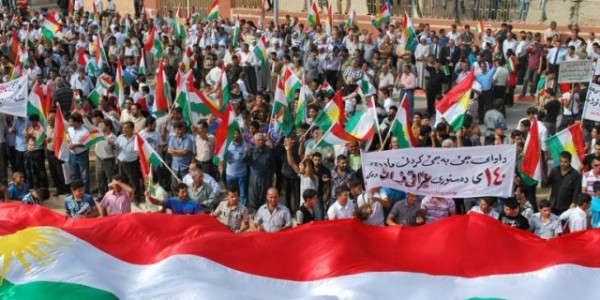 Syrian Army Attacks Formerly Liberated Kurdish Town, Abducts Activists.  The army of Syria’s embattled dictatorship has entered one of the Kurdish towns along the border with Turkey that it had abandoned to Kurdish forces last month, according to sources on August 27th.  That day, according to a source from the Kurdish Youth Movement (T.C.K.), Syrian forces attacked the town, Amuda (called Amudê in Kurdish) that day and kidnapped several Kurdish activists.  There was at last report a tense standoff between the army and the Kurdish defenders of the region, which was declared the Western Kurdistan Autonomous Region last month. 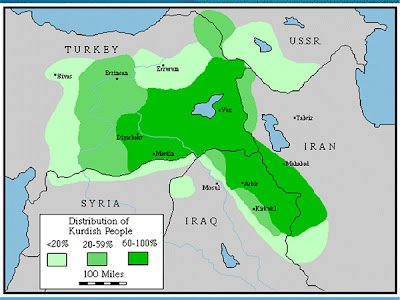 P.K.K. Attacks Border Battalion in Hakkari, Killing 1 Turkish Soldier.  Fighters from the banned separatist Kurdistan Workers’ Party (P.K.K.) attacked a border battalion in Hakkari province in southeastern Turkey on August 25th, resulting in a battle in which one Turkish soldier was killed and five were wounded.  It was the second such attack in as many days.

Riot Cops in Şırnak Disperse Unauthorized Rally with Water Cannons, Tear Gas.  After Turkish authorities refused to grant a permit for a Kurdish demonstration in Cizre on August 26th, thousands rallied anyway in support of the P.K.K.  Protesters threw stones and incendiary devices at police, and police used tear gas and water cannon to disperse the crowds.  Cizre is in southeast Turkey’s Şırnak province, near the borders with Syria and Iraq.


Abducted Van Politician Released by P.K.K. in Northern Iraq.  A Turkish politician abducted July 2nd in southeastern Turkey’s Van province was released by his Kurdish captors August 23rd in northern Iraq and was at his home village in Ongün the following day. The politician, Hayrullah Tanış, who is the Justice and Development Party (A.K.P.) chair for Van’s Gürpınar district, had been abducted in Van by the banned separatist P.K.K.  He was let free into the hands of human-rights officers for the province.

Complaint Filed against B.D.P. Deputies for Secret Meetings with P.K.K.  In southeastern Turkey’s Şırnak province, a market owner filed a criminal complaint against officers from the mainstream, pro-Kurdish Peace and Democracy Party (B.D.P.) for holding meetings with members of the banned separatist P.K.K. in Şemdinli, the town in Hakkari province which was the scene of a deadly, days-long battle earlier this month between the P.K.K. and the Turkish military.  The plaintiff, Mahmut Çakir, says that 10 B.D.P. members, including the deputy co-chair Gülten Kışanak and other deputies, met secretly with P.K.K. militants and thus “supported and emboldened terror and terror propaganda.”

Teacher Arrested for Aiding Gaziantep Car-Bomb That Killed 9.  A teacher was placed under arrest on August 26th under suspicion of aiding the August 20th car-bomb attack in Gaziantep (reported on last week in this blog) which killed nine people.  He was first picked up by police in Mersin province, on the south-central coast.  It is said that he brought the same car used in the bombing to a repair shop in Şanlıurfa, in Gaziantep province, near the border with Syria, a few days before the attack.  TheP.K.K. continues to deny responsibility for the bombing.

Iraq–Turkey Oil Pipeline Bombed on Turkish Side of Border.  A pipeline carrying oil from northern Iraq’s Kurdistan region into Turkey was attacked August 26th, causing a fire and halting the flow of crude.  The bombing was on a length of the Kirkuk–Ceyhan pipeline in Turkey’s Şırnak province.  The P.K.K. or oil smugglers are suspected.

Turkey Bombs P.K.K. Targets in Northern Iraq.  The Republic of Turkey sent warplanes on August 24th to strike at P.K.K. positions in the mountains just over the border in northern Iraq’s autonomous Kurdistan region.  The announcement from the P.K.K. itself said, “Four warplanes bombed the villages of Silliyeh and Sargal at 1:30 a.m.  There were no casualties, but the bombings caused damage to the houses of residents of the villages, and also damaged some farms.”

Iraqi Shiite Mullah Clarifies Comments on Mahdi Waging Holy War on Kurds.  A radical Shiite Arab mullah in Iraq has clarified his recent controversial comments (reported last week in this blog) in which he claimed that when the Imam al-Mahdi—the Shiite Muslim version of the messiah—arrives he will wage holy war against the Kurds of Iraq, whom he called the “rogues mentioned in the books of epics and tribulations.”  The cleric, Jalal al-Din Ali al-Saghir, of the Islamic Supreme Council of Iraq (I.S.C.I.), has been forced to meet with Jalal Talabani, the president of Iraq, and with Massoud Barzani, the president of the autonomous Kurdistan Regional Government (K.R.G.) in northern Iraq to explain his views.  He now explains that a Shiite holy war against the Iraqi Kurds “could be some of the signs of the appearance of the awaited imam, but in order for these expectations to come true, a strong earthquake needs to hit Syria, and Turkish soldiers must land in the Cizre region.”  The earthquake, he predicted, could mean the division of Syria into five separate countries.  Phew, I’m glad he had the chance to explain himself more fully.  At first there, he sounded like he might have been some kind of nut.


Kurdish Party in Iraq Demands Census to Reapportion Parliament Seats.  A member for the opposition Kurdistan Alliance in Iraq’s national parliament, is arguing that a new, proper census must be held to determine how many parliamentary seats will be set aside for Kurdish regions.  In 2010, food-ration cards were used to count the number of residents in different provinces, but the K.A. lawmaker, Dr. Mahmoud Osman, points out that under that system “the Kurds will lose even more votes this time,” since “Kurds, unlike the Iraqi population in the south and middle of Iraq, do not register their children in the ration system.”  Kurds lost 13 parliamentary seats in the counting that preceded the 2010 elections.  Another K.A. legislator, Sirwan Ahmed, who is from Kirkuk, says that the Shiite and Sunni Arabs who dominate the rest of Iraq are resistant to any new census for fear of confirming that the disputed city of Kirkuk now has a Kurdish majority.  It was 49% Kurdish in 1997, and many Kurds have moved to the city since then.

Rights Group Says Female Genital Mutilation Persists in Iraqi Kurdistan, Despite Ban.  The international group Human Rights Watch (H.R.W.) reported this week that the practice of female genital mutilation persists in the autonomous Kurdistan region of northern Iraq, a year after it was banned by the Kurdistan Regional Government’s parliament.  H.R.W. blamed K.R.G. government intransigence: none of the villagers they interviewed for a new report had seen any evidence of actions or campaigns taken by the K.R.G. government to eliminate the practice.

Yazidi Emir Declares His People Are Kurds, Backs Kurdistan Autonomous Government.  The emir of the Yazidi community in Iraq, Sheikh Tahseen Saeed Bek, this week reiterated to the press his people’s support for the northern autonomous Kurdistan Regional Government (K.R.G.) against the central Iraqi government in Baghdad.  Bek, who lives near Dohuk, in the province of the same name in the K.R.G.’s area of jurisdiction, declared that the half-million or so Yazidis are, quite simply, Kurds.  Most Yazidis, however, live in Nineveh province, parts of which are a Kurdish-dominated area which lies outside the K.R.G. area but which Kurdish nationalists covet.  Traditionally, the Yazidis have been shunned and regarded as devil-worshippers, though their religion is a mixture of Sufism, Zoroastrianism, and Kurdish folk religion.

French Police Arrest 5 P.K.K. Operatives in Extortion and Murder Plot.  Media reported that two covert operations on August 24th and 25th against P.K.K. operatives in southern France have yielded five arrests.  The suspects are said to have been plotting the murder of a Turkish citizen living in Marseilles who failed to pay a “revolution tax.”  Displays of political support for the P.K.K. are common in Marseilles.

[Also, for those who are wondering, yes, this blog is tied in with a forthcoming book, a sort of encyclopedic atlas to be published by Auslander and Fox under the title Let’s Split! A Complete Guide to Separatist Movements, Independence Struggles, Breakaway Republics, Rebel Provinces, Pseudostates, Puppet States, Tribal Fiefdoms, Micronations, and Do-It-Yourself Countries, from Chiapas to Chechnya and Tibet to Texas.  Look for it in spring 2013.  I will be keeping readers posted of further publication news.]
Posted by Chris Roth at 6:48 AM