Turkish Premier Proposes Lifting Immunity from Kurdish Parliamentarians.  The prime minister of the Republic of Turkey, Recep Tayyip Erdoğan, said on November 26th that he favored rescinding the immunity from punishment enjoyed by Kurdish members of parliament.  Kurdish M.P.s are already frequently investigated for real or supposed links to the banned, separatist Kurdistan Workers’ Party (P.K.K.), and some have been convicted, but are not required to serve their sentences while in office.  The following day, Erdoğan advanced plans to investigate 10 M.P.s, nine of them from the Peace and Democracy Party (B.D.P.), which some regard as the political wing of the P.K.K.

1 Turkish Soldier, 2 Rebels Killed in Mardin Province; Landmine Wounds 6 Troops.  After a lull in what this summer and fall have been almost continuing violence in Turkey’s civil war against its Kurdish minority, a Turkish soldier and two members of the banned separatist Kurdistan Workers’ Party (P.K.K.) were killed in a battle in Mardin province, in southeastern Turkey’s Kurdistan region.  One soldier was injured, according to the military, which reported on the battle on November 27th.  The day before, six Turkish soldiers were hurt by an exploding landmine in Diyarbakır province. 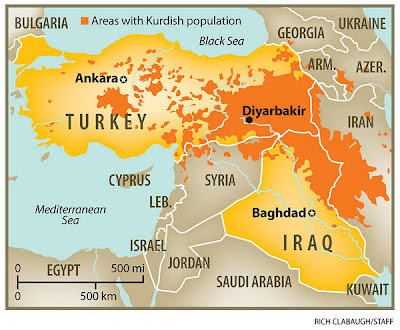 Kurd Who Threw Shoe at Erdoğan in Spain Released from Prison Early.  A Kurd from Syria convicted in 2010 of pelting the prime minister of Turkey with a shoe—one of the gravest insults in Muslim culture—was pardoned on November 30th with several months left to go on his three-year sentence.  In the incident, in Seville, Spain, the Kurd, Hokman Joma,  had hurled a shoe at Prime Minister Recep Tayyip Erdoğan and shouted, “Long live Kurdistan!”

More Turkish Airstrikes on Kurdish Positions in Northern Iraq.  The Republic of Turkey launched air raids this week against supposed structures and weapons caches of the banned, separatist Kurdistan Workers’ Party (P.K.K.) just over the border in northern Iraq’s autonomous Kurdistan Region.  No casualties were reported.

Military Standoff with Kurds near Kirkuk Ends as Baghdad, Erbil Sign Pact.  The autonomous Kurdistan Regional Government (K.R.G.) in northern Iraq sent more peshmerga reinforcements on November 24th to an area near Kirkuk where Kurds are standing off against the military of Iraq’s Shiite-Arab-dominated central government over the question of the Djila Operations Command.  The Djila brigades were established last year by Iraq’s authoritarian Shiite prime minister, Nouri al-Maliki, to police the provinces of Kirkuk and Diyala, which officially lie outside the Kurdistan Region but which the K.R.G. partly administers.  The two sides negotiated for over a week to defuse the crisis in the oil-rich and hotly contested province.  The K.R.G.’s deputy minister for peshmerga, Anwar Haji Osman, was saying, “If they overstep the line, we will strike them.”  But on November 26th, Maliki’s office announced that the K.R.G. and Baghdad had agreed to pull forces back to their original positions.  On November 28th, a 14-point hold-fire agreement was signed by both sides, including a pledge to form a joint committee to enhance cooperation between Baghdad and Erbil in disputed regions.

4 Killed in Car Bombings at Kurdish Party Offices, Other Sites in Kirkuk.  Among the 29 people killed in car bombings throughout Iraq on November 27th were four casualties of three separate car-bomb attacks in the Kurdish section of Kirkuk, in the Kurdish-dominated north of the country.  One exploded near a public market, another near a gas station, and the third at the offices of the Kurdistan Democratic Party (K.D.P.). 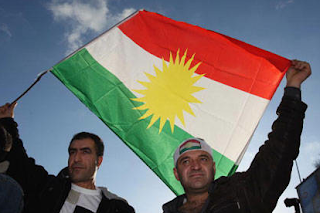