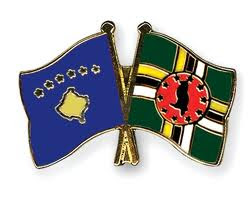 Following last month’s establishments of diplomatic relations by the Republic of Fiji (as reported at the time in this blog) and, the following week, the Federation of St. Kitts and Nevis, another Caribbean island nation, the Commonwealth of Dominica this week became the 97th independent state to recognize the Republic of Kosovo.

This officially tips the balance, so that now just over one-half of the United Nations’ 193 member states now recognize Kosovo.

Neither of the U.N. General Assembly’s two non-member observer states, the State of Palestine (recognized by 131 out of 193 U.N. member states) and Vatican City, recognizes Kosovo.

Kosovo is also recognized by the Republic of China (Taiwan), which itself is recognized by only 22 U.N. member states, plus the Vatican.

[Also, for those who are wondering, yes, this blog is tied in with a forthcoming book, a sort of encyclopedic atlas to be published by Auslander and Fox under the title Let’s Split! A Complete Guide to Separatist Movements, Independence Struggles, Breakaway Republics, Rebel Provinces, Pseudostates, Puppet States, Tribal Fiefdoms, Micronations, and Do-It-Yourself Countries, from Chiapas to Chechnya and Tibet to Texas.  Look for it in spring 2013.  I will be keeping readers posted of further publication news.]
Posted by Chris Roth at 12:12 PM