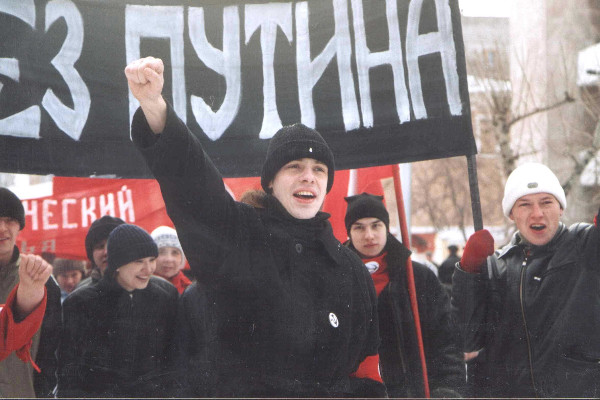 A group of citizens in the exurbs of Moscow on October 3rd notified Vladimir Putin, president of the Russian Federation, that they intended to hold a referendum on independence for what is being called, variously, either the Domodedovo Republic (after the main city in the area) or the Russian Democratic Republic, also translated as the Democratic Republic of Rus.  In a movement initially reported on this week by the Association for Russian Human-Rights Lawyers, the activists were pushed to secession by a long-simmering dispute over a toll-road project, rejected by 95% (or 98%, depending on whom you believe) of local residents in a 2007 referendum, though the road was put through anyway two years later.  The road will link Moscow to Sochi, the Black Sea resort in the region of Circassia which will host the 2014 Winter Olympics.  One attorney for the movement, Yevgeny Arkhipov, cited residents being forced off their land and some being forced to pay fees for gathering mushrooms and berries in what had once been land for public use.  Another activist, Marina Zlotnikova, put the blame on ethnic-Azeri criminal syndicates in league with developers, who are thought to be in league with Azerbaijan’s president, Ilham Aliyev.  (In the working-class Russian imagination, all bad things in the world can eventually be blamed on some minority group from the Caucasus.)

The Domodedovo separatists have also written to the European Union (E.U.) declaring their intention of being a member-state, while still being apparently—the phrasing is vague—a constituent autonomous unit within the Russian Federation.  Other statements, however, refer to full independence.

The area in question includes not just Domodedovo (population: 96,000) and Podolsk (188,000), in Moscow Oblast, but also, according to one source, the smaller community of Shebantsevo (?).  But there is still confusion as reports, some of them hastily translated, trickle into the English-language media.  The story was pounced on gleefully by the often-inaccurate Kavkaz Center website, run by the Caucasus Emirate movement, a radical-Islamist terrorist network which aims to carve out an independent theocratic caliphate in what is now Russia’s predominantly-Muslim southwestern rim.  The site celebrates any thumb anyone sticks in Moscow’s eye, with constant reference to “Czarist” “minions” and “puppets.”  The Islamists’ article on the subject connects the Domodedovo separatists with the medieval state of “Przemysl,” meaning perhaps one of the 14th- and 15th-century Upper Oka Principalities around Muscovy, one of which had its capital at Peremyshl (Перемы́шль), now a village of 3,000 or so in Kaluga Oblast, to Moscow Oblast’s southwest.  I am not sure at this point, however, if its territory included Domodedovo and Podolsk.  Nor have I seen a source directly quoting a member of the separatist movement itself invoking the Paremyshl principality.  (The C.E. site adds to the confusion by referring to it as a Polish principality, but I think, after comparing a lot of sources, that they are in their haste confusing it with a much earlier, similarly but not identically named Principality of Peremyshl, an imperial subject of Kievan Rus’ centered on what is now Przemyśl (that’s the modern Polish spelling; in Ukrainian Cyrillic, it is Перемишль), a town in southeast Poland at the border with Belarus.)

This, of course, takes us to the important question of what this new republic’s (or revived prinicipality’s??) flag will be.  If there is truly a push to restore the Peremyshl Principality, then I have not found a specific flag for this polity, but its ruling Gorkachov dynasty used this rather shabby-genteel-looking sepia coat of arms: 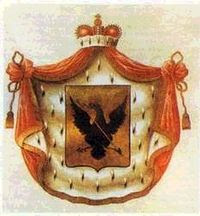 Certainly, not very modern looking.  At the other extreme is the modern, Soviet-designed coat of arms for the Domodedovo Urban Okrug (not all Russian municipalities have flags but nearly all have coats of arms or seals): 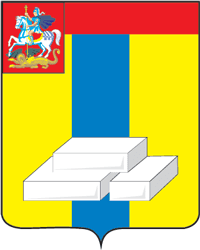 This seems to be a tribute to the glorious liberated workers whose job is to stack oddly-shaped crates on pallets at the Domodedovo airport—with an eye-strainingly minuscule St.-George-slaying-the-dragon squeezed into the top left just to relieve the drabness.  Those boxes look even slightly sinister to me, like some debased version of the Monolith in 2001: A Space Odyssey.  No, this will not do at all either.

I much prefer the Premeshyl (Russia) coat of arms created for the town during the Czarist period: 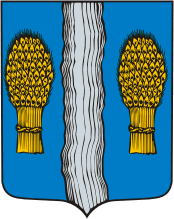 This shows a river flanked by two sheaves of wheat.  The best so far.  However, the one image I’ve seen of the Domodedovo separatists themselves waving a clearly visible flag is from the Euronews video clip on the movement.  Here it is (alongside the E.U. flag): 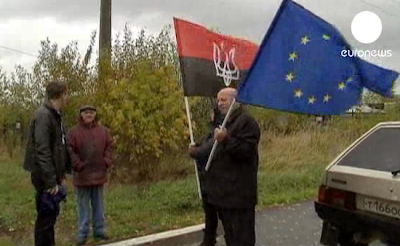 I had never seen this flag before.  (Using the wickedly useful online flag-identifier tool at http://www.flagid.org/, I came up with only two red-above-black bicolors—the Republic of Angola and the Republic of Colombia’s Department of Norte de Santander, and both those use very different emblems.)  Then, it seemed, some avocational Russophilic vexillologists were way ahead of me (you gotta love the World Wide Web): the article on the Domodedovo movement on http://www.russiaslam.com, a website featuring translations of Russian news articles, presents a very Czarist-nostalgic news story from Russia which describes the movement thus: “The founding of the [Domodedovo] Republican Committee is as a result of the interests of local residents and history, we are in fact talking about a revival of the Russian state that had its roots in Kiev Rus’, the first national revival of Rus’ in 800 years, after the occupation by the Golden Horde.”  This source calls the new entity the Domodedovo Slavic Democratic Republic (S.D.R.) (in Russian: Домодедово Славянской Демократической Республики (СДР)).  The flag from the image above is reproduced, here shown: 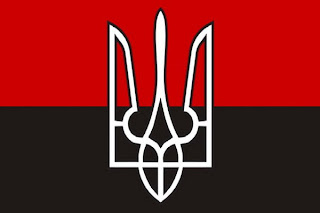 This essentially reproduces the coat of arms of Ukraine—Kievan Rus’ being the connection here, because in the Middle Ages what is now Muscovy was ruled from Kiev (Kyiv), in modern Ukraine—using the (how ancient?) Ukrainian trident—

—and changes the colors from blue and yellow to red and black.  One reader, “Retif100,” comments: “Such a flag was adopted by the Organisation of Ukrainian Nationalists, a variation on the theme of the Ukrainian Insurgent Army, Congress of Ukrainian Nationalists, and UNA-UNSO.  Now, that flag hangs at the City Council in Ivano-Frankivsk” (in western Ukraine).  But not just any O.U.N. flag, Retif100 fails to add, but the right-wing fascist “O.U.N.–B” faction that pushed for an independent anti-Communist Ukraine during the Second World War.  The O.U.N.–B’s armed wing, the Ukrainian Insurgent Army, used this flag: 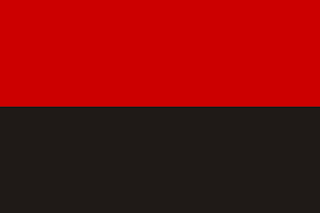 There it is—red and black.  And the O.U.N.–B itself used this rather creepy, vaguely-swastika-like emblem:

Yuck, right?  I feel like taking a shower after looking at that logo.  (The more moderate O.U.N. faction used a blue-and-yellow Ukrainian trident stylized into a sword.)  [For more on red-and-black Ukrainian flags, see my more recent article on the Euro-Maydan protests from this blog.]

These Domodedovo secessionists may be worried about Azeri influence in their region, but they might also want to examine the Ukrainian fascist heraldry being revived in their own ranks.

Oh, and as to the question of whether the movement can succeed.  Um, no.  One possible obstacle is that the territory claimed also includes Domodedovo International Airport, which serves Moscow and is Russia’s busiest hub.  They can wave their Nazi-style flags for the moment, but mark my words: if they ever try to disrupt the economy, old Vlad will go all Second Chechen War on their asses and the cobblestone streets of Domodedovo will run with blood.

[Note: This version of the article corrects an earlier version which mischaracterized the “russiaSLAM” website, which is indeed a news portal featuring translation, not a source with its own perspective.  Thanks to russiaSLAm for taking the time to clarify this.]

[Also, for those who are wondering, yes, this blog is tied in with a forthcoming book, a sort of encyclopedic atlas to be published by Auslander and Fox under the title Let’s Split! A Complete Guide to Separatist Movements, Independence Struggles, Breakaway Republics, Rebel Provinces, Pseudostates, Puppet States, Tribal Fiefdoms, Micronations, and Do-It-Yourself Countries, from Chiapas to Chechnya and Tibet to Texas.  Look for it in spring 2013.  I will be keeping readers posted of further publication news.]
Posted by Chris Roth at 10:13 AM