Islamist Terrorist Arrested in Home of Senator from Nigeria’s Ruling Party.  A member of the radical Islamist terrorist network Boko Haram was arrested inside a senator’s home in Maidiguri, capital of Borno State in Nigeria’s far northeast, by agents of the federal anti-terrorist Joint Task Force (J.T.F.).  The senator, Ahmed Zanna of the ruling People’s Democratic Party (P.D.P.), when confronted by media, said that the suspect, Shuaibu Mohammed Bama, was not arrested in his house, but he admitted that the man was his nephew (sister’s son).  Later, he admitted that it was indeed his home but that he had said it was not because it technically belonged to the former Borno governor, Sen. Ali Modu Sheriff.  Zanna has been accused in the past of supporting Boko Haram.  He told an interviewer, “He beats up my children; he abuses my friends.  He came to my house, so I sent him away.  That was about a year ago.  And for whatever reason I don’t know, he came to my house last week and I said he should leave the house.  Sometime ago, he even threatened to kill his mother.  So, the mother was not even feeling comfortable living with him.  And he narrated that to me.  That is why I also do not want him to be near me.  I don’t know him to be a Boko Haram member.  Never, never, I do not know him to be a member of Boko Haram.”

Street Battles Continue to Rage between Military and Boko Haram in Potiskum.  The death toll in the street battles that began October 17th in Potiskum, in northeastern Nigeria’s Yobe State, has risen to at least 23, according to hospital morgues, though details coming out of the barricaded city this week were sketchy.  Some put the death toll at 31, with eight killed on October 20th, including a school principal.  Days after the fighting between police, military, and the Boko Haram terrorist network, buildings were still in ruins from fires that some say were started by Nigerian soldiers.  But as of October 20th there was still violence, with unidentified militants storming the home of a customs officer in Potiskum and killing him and his son.  On October 22nd, a curfew was imposed on the already locked-down city. 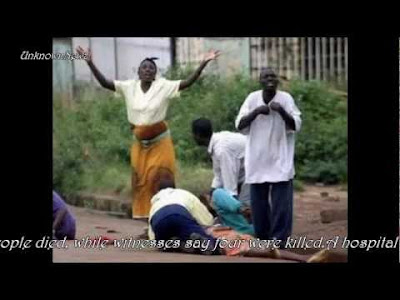 In other violence in northern Nigeria, nine bullet-riddled bodies were found in Adamawa State this week.  Witnesses say the nine were executed by Nigerian soldiers hunting for the perpetrators of a roadside bomb four days earlier.  On October 19th, suspected Boko Haram militants attacked a market in Borno State, killing a construction worker from China and injuring three other civilians.  A middle-aged man was set on fire by Boko Haram members in Maiduguri, in Borno State, this week, and in the same city on the morning of October 26th Boko Haram members killed three young people in front of their parents.

Nigerian Troops Foil Raising of (New?!) Boko Haram Flag in Damaturu.  The federal anti-terrorist Joint Task Force (J.T.F.) has prevented members of Boko Haram from raising their yellow, white, and red striped “national flag” in Damaturu, in Nigeria’s Yobe State.  The militia had traditionally sought only the extension of shari’a (Islamic law) from the northern, Muslim-dominated Nigerian states where it is in force to the Christian-dominated southern half of the country, but increasingly there is talk of a separate nation, with Damaturu as its capital.  This, of course, is exciting news for us vexillophiles at Springtime of Nations.  But I’ll be damned if I can find an image of this new flag anywhere.  The news report also mentioned that the tricolor (vertical? horizontal?) features a “weapons of mass destruction” emblem (a nuke?).  Here, anyway (I found it online here), is a flag of an earlier (pre–Boko Haram), now rival proposal for the flag of an Islamic Republic of Arewa (Arewa being the name for ‘north’ in Hausa, northern Nigeria’s main language): 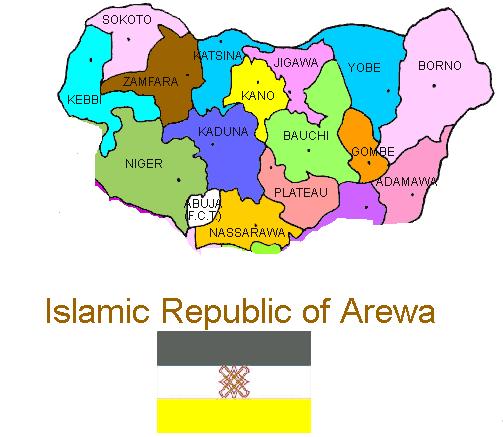 Readers of this blog are enthusiastically encouraged to send me any information they might have on this new Boko Haram flag.

There are also, incidentally, several Hausa and Fulani ethnic flags.  This, a Hausa one, is my favorite:

... but I don’t expect Boko Haram to opt for anything so classy.

Nigerian Court Dismisses Bakassian Lawsuit against Boundary Commission.  A high court in Abuja, Nigeria, tossed out on October 24th a lawsuit (described last week in this blog) brought by indigenous people from the disputed Bakassi Peninsula which faulted Nigeria’s National Boundary Commission (N.B.C.) for demarcating the finalized boundary between Nigeria and Cameroon without consulting the people affected.  Earlier this month, the Nigerian government allowed the window of appeal to close on a 2002 International Court of Justice (I.C.J.) ruling transferring sovereignty of the peninsula to Cameroon.  The judge ruled that the plaintiffs were pleading a political case, not a legal one. 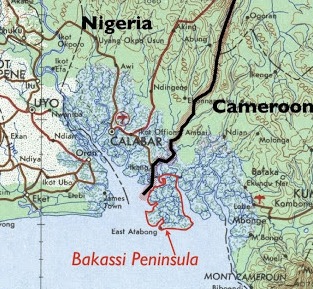 Nigerian Terrorists Assassinate Mayor in Northern Cameroon.  It was revealed this week that earlier this month a deputy mayor in the Republic of Cameroon’s Région de l’Extrême-Nord (Far North Region) was assassinated by the terrorist network Boko Haram after a string of threats.  Reports said that the third deputy mayor of the town of Makary, Abba Djidda Alahdji, had been targeted because of ties to a police commissioner in neighboring Nigeria, where Boko Haram is waging a deadly Islamist insurgency.  He was gunned down on October 5th by militants who followed him home from prayers.  This represents one of the first major incursions by the group outside Nigeria, though Nigerian intelligence has said that Boko Haram uses areas across the border in Cameroon as a safe haven.  Makary is in the predominantly-Muslim far north of Cameroon—otherwise a majority-Christian nation—near where Cameroon and Nigeria’s northeastern Borno State (Boko Haram’s center of activity) meet the Republic of Chad.  The Fulani, who dominate northern Nigeria, are a major presence in the town.

[For those who are wondering, yes, this blog is tied in with my forthcoming book, a sort of encyclopedic atlas to be published by Litwin Books under the title Let’s Split! A Complete Guide to Separatist Movements and Aspirant Nations, from Abkhazia to Zanzibar.  (That is shorter than the previous working title.)  The book, which contains 46 maps and 554 flags (or, more accurately, 554 flag images), will be on shelves and available on Amazon on March 1, 2015.  I will be keeping readers posted of further publication news.  Meanwhile, please “like” the book (even though you haven’t read it yet) on Facebook and see this special announcement for more information on the book.] 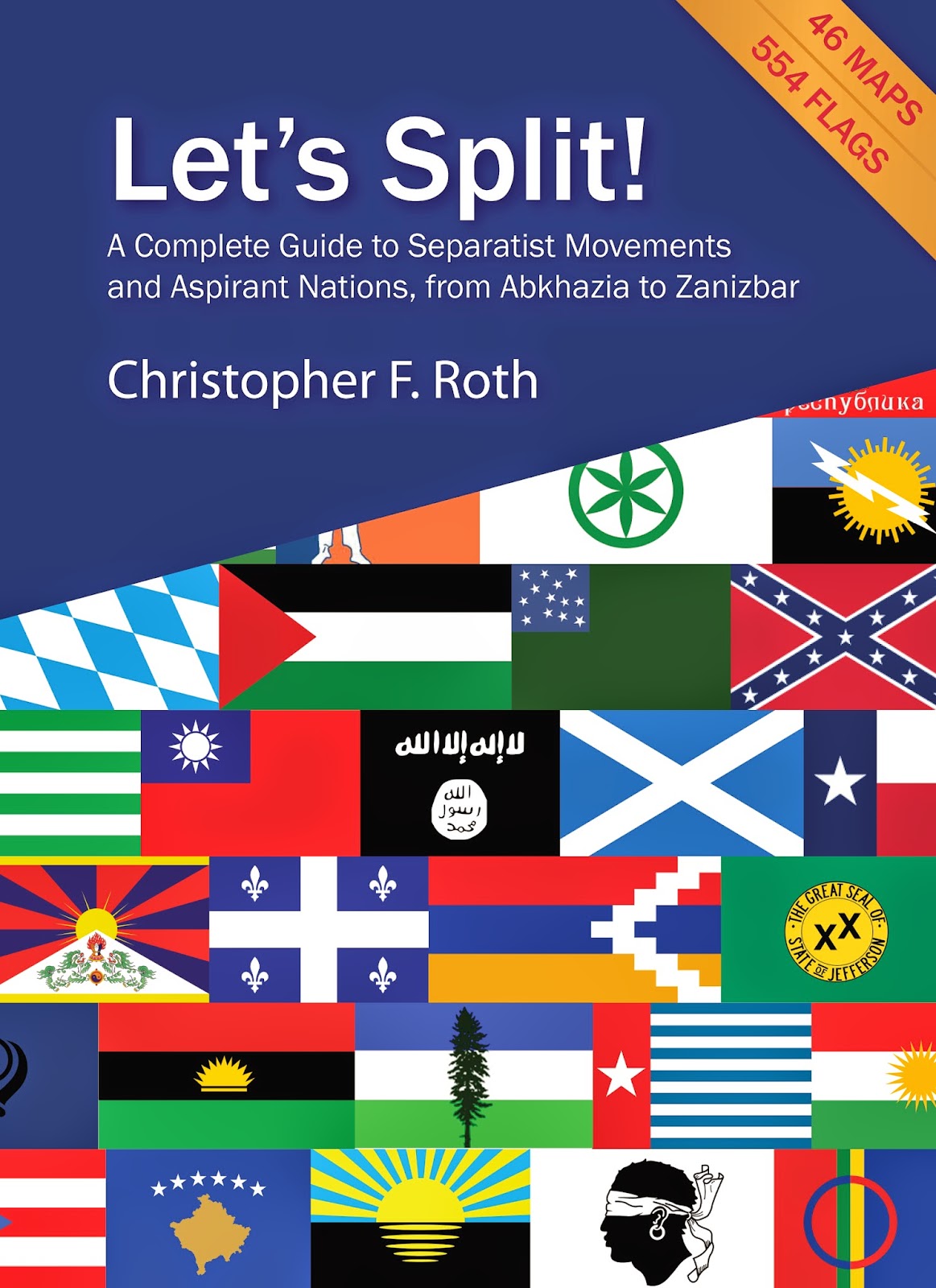