On August 28th, the Jubaland State of Somalia reached an agreement to cooperate with the Federal Republic of Somalia.  It was signed in Addis Ababa, Ethiopia, by the Somalian minister of state, Farah Sheikh Abdulkadir, and Sheikh Ahmed Mohamed Islam (better known as Ahmed Madobe), who only the most powerful and resilient of several warring self-proclaimed presidents of Jubaland, and not even the only one who claims to have been “elected.”  The deal allows Madobe to govern Jubaland during a two-year transition under a so-called Interim Jubba Administration (I.J.A.).  In exchange, the federal government will run the airport and harbor of Jubaland’s capital, Kismayo, and will absorb “all security elements” of what passes for government in Jubaland at the moment—i.e., Madobe’s powerful militia, the Ras Kamboni Brigades.  Though Jubaland is and will be to a great extent self-governing, this agreement makes nominally a part of a nominally federal “Somalia”—though true Somalian administration extends very little beyond the federal capital, Mogadishu.  The deal also represents a victory of sorts for Somalia’s prime minister, Abdi Farah Shirdon, who had been pushing Somalia’s skeptical president, Hassan Sheikh Mohamoud, to welcome the formation of Jubaland. 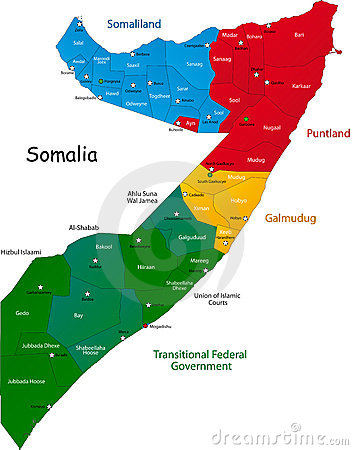 Jubaland consists, according to the new agreement, of the nominal Somalian gobols (regions, or provinces) of Gedo, Middle Jubba, and Lower Jubba.  Madobe’s Ras Kamboni fighters helped troops from Kenya and Ethiopia, under an African Union (A.U.) mandate, liberate the Jubaland area last year from an al-Qaeda-affiliated Islamist militia called al-Shabaab, which has since been dispersed into the hinterlands.  Madobe then tried to set up a Puntland-style (see below) federal autonomous region in the south called Jubaland (also spelled Jubbaland, and sometimes also known as Azania or Greenland) but met with initial resistance from Mogadishu.  (Jubaland was listed in this blog at the beginning of this year as one of “10 Separatist Movements to Watch in 2013.”)


Two days after the Jubaland deal, President Mohamoud said the federal administration was open to talks that would repair relations with the Puntland State of Somali, a de facto independent parliamentary republic at the tip of the Horn of Africa which announced last month it was formally severing all ties with the Mogadishu government (as reported at the time in this blog). 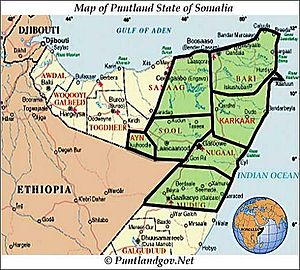 These two developments indicate the possibility of the northern and southern ends of “Somalia” being brought into the nominal federal fold—or perhaps even more than nominally.  (Puntland is considered the northern end of Somalia only because Mogadishu has, despite official protests, in reality long resigned itself to the de facto secession of the internationally-unrecognized Republic of Somaliland, to Puntland’s west.)  The Jubaland agreement, in particular, is being praised by the United Nations (U.N.), by the mostly pro-Mogadishu international community generally, and by the government of Puntland.  But there may be associated tensions emerging in the nation’s middle section . . .

In response to the Jubaland accord, hundreds of residents of Baidoa, Somalia’s third-largest city, took to the streets on August 31st to protest Jubaland’s reabsorption into Somalia.  Baidoa is culturally and geographically part of the larger Jubaland region and in fact used to be the capital of Upper Jubba province before internal borders were reorganized.  It is now the capital of Baay (also spelled Bay) province (see map above).

Like most parts of Somalia, Baay province is only nominally under Somalian administration, at best.  Local control is in the hands of clan elders.  An elder’s-council spokesman, Malaq Ali Mumin, who also represents elders from the province of Bakool, told media during the protest, “We have withdrawn our support from the Somali federal government in Mogadishu.  We call on parliamentarians and other federal government officials hailing from this region to come back.”  Elders said that federal government officials were now banned from Baay.  Mumin, of the elder’s council, told reporters that his organization was declaring war in order to “liberate the regions of ‘Lower Jubba, Middle Jubba, and Gedo.’”
Jubaland and Puntland may be on the brink of being tamed and brought in from the cold.  But do we now have to contend with a Republic of Baay?

[Also, for those who are wondering, yes, this blog is tied in with a forthcoming book, a sort of encyclopedic atlas to be published by Auslander and Fox under the title Let’s Split! A Complete Guide to Separatist Movements, Independence Struggles, Breakaway Republics, Rebel Provinces, Pseudostates, Puppet States, Tribal Fiefdoms, Micronations, and Do-It-Yourself Countries, from Chiapas to Chechnya and Tibet to Texas.  Look for it some time in 2013.  I will be keeping readers posted of further publication news.]
Posted by Chris Roth at 1:21 PM