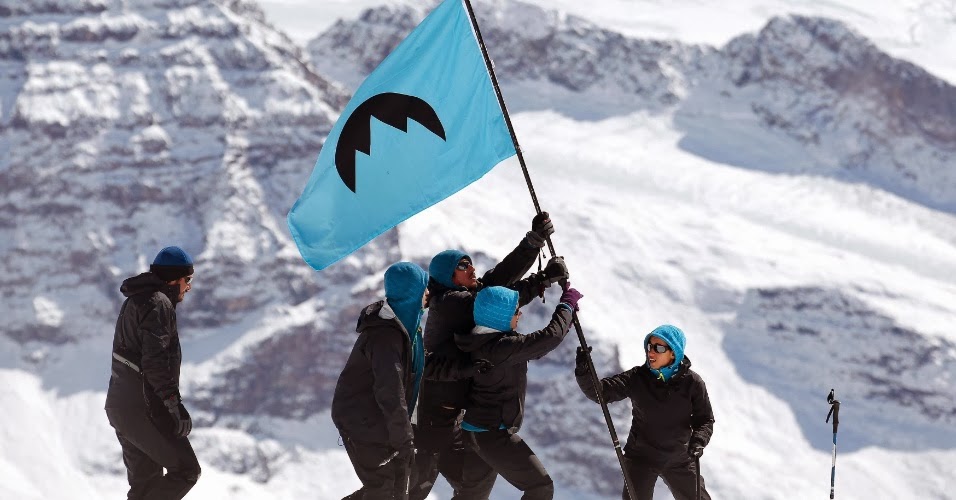 March 5th, 2014, was independence day for South America’s newest nation—or is it just a publicity stunt?  Well, it has a flag and embassies and seems to be quite serious.  It is called the Glacier Republic, and it consists of the 23,000 square kilometers or so of the Republic of Chile’s territory that is covered by glaciers. The republic was declared by the international environmental organization Greenpeace to call attention to the fact that Chile does not take care of its glaciers, which make up 82% of the continent’s total glacier-covered land.  More specifically, glaciers are ill-defined under Chilean law, which classifies them as neither public nor private—a loophole that this week’s declaration of independence exploits.

The announcement of the new state (known in Spanish as la República Glaciar) was made March 5th in a full-page ad in the New York Times (reproduced below).  As the director of Greenpeace Chile, Matías Asún, explained, “Glacier Republic was founded because in Chile there is a legal loophole that does not recognize these huge ice masses as part of its sovereignty.  Neither the constitution nor the water code mentions glaciers as public goods that need to be protected actively.  Chile is one of the few countries without a law to protect glaciers, and that has allowed mining companies to become their main threat.”  Greenpeace explains that Chile can have the territories back when it agrees to take proper charge of them. 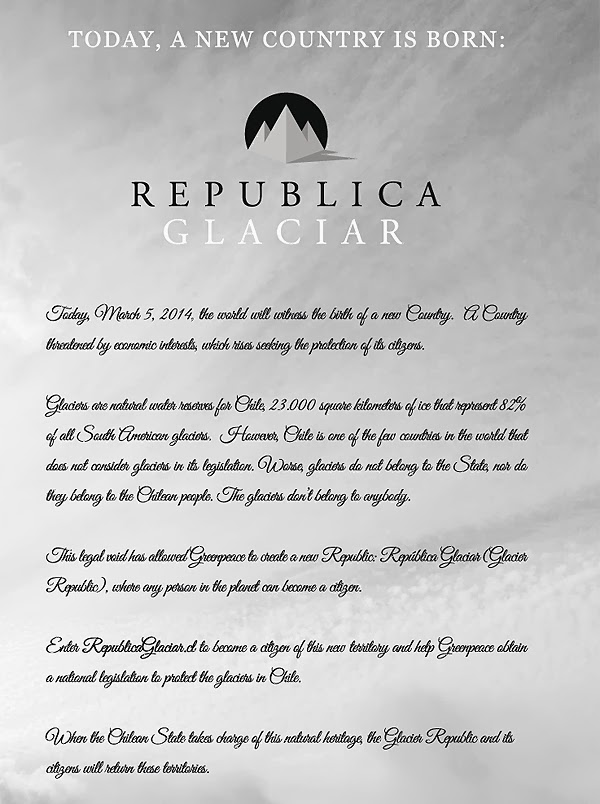 The Glacier Republic maintains its capital, according to Greenpeace, in a tent erected high in the Andes Mountains in an as yet undisclosed location, in the Patagonia region shared by Argentina and Chile where all of South America’s glaciers lie.  It seems quite possible that the as yet unnamed capital will exceed the current record held by La Paz, Bolivia (11,942 feet), for the national capital at the highest altitude above sea level.

Readers can visit the Glacier Republic website and apply for a passport.  Among the first batch of citizens is the flamboyant Chilean “anti-poet” Nicanor Parra, one of Latin America’s most revered writers.  Since Parra is 99 years old, it is not clear if he will make the trek to visit his new fatherland.

This is not Greenpeace’s first foray into micronationalism.  In 1997, Greenpeace activists declared the British-administered island outcropping of Rockall to be an independent country called Waveland and erected a flag there (see below).  Rockall, like Chile’s glaciers, is territorially ambiguous.  Though governed by the United Kingdom as part of Scotland’s Outer Hebrides council area (as erstwhile “counties” are now called), it is also subject to claims by the Republic of Ireland (as part of County Donegal), as part of the Republic of Iceland, and as part of the Kingdom of Denmark (as part of the autonomous and occasionally separatist Faroe Islands).  The uninhabited islet—it is too small to have any source of freshwater—is about equidistant between those four nations.  A Scottish separatist named Nick Hancock set out last year to break Greenpeace’s 42-day record with a 60-second squat on Rockall, during which time he was to unfurl a “Yes Scotland” banner promoting Scotland’s independence from the U.K.

There has still been no official response to the Glacier Republic declaration from the Chilean government.  The country is not known for its tolerance of separatism.  Chilean authorities use heavy-handed tactics to suppress the independence movement on Easter Island, and in the Chilean mainland Mapuche Indian activists in the land struggle are routinely rounded up and tried and prosecuted as “terrorists,” to an extent that has alarmed international-rights organizations.

[For those who are wondering, yes, this blog is tied in with a forthcoming book, a sort of encyclopedic atlas to be published by Auslander and Fox under the title Let’s Split! A Complete Guide to Separatist Movements, Independence Struggles, Breakaway Republics, Rebel Provinces, Pseudostates, Puppet States, Tribal Fiefdoms, Micronations, and Do-It-Yourself Countries, from Chiapas to Chechnya and Tibet to Texas.  Look for it some time in 2014.  I will be keeping readers posted of further publication news.] 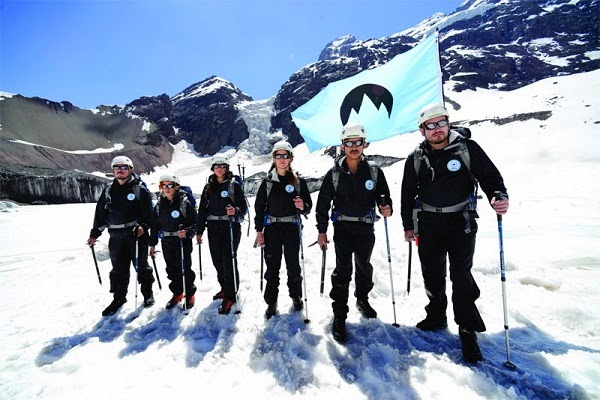