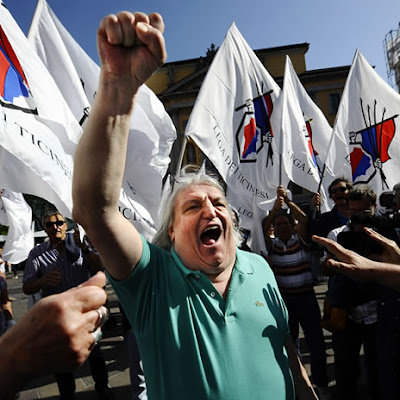 In Switzerland, the original multi-ethnic, multi-lingual democracy, which has weathered many of the storms of Europe’s separatist tumults without coming apart, has, for better or for worse, lost one of its fringe separatist nationalists this week.  Giuliano Bignasca, the founder of the Lega dei Ticinese (League of Ticino) representing Switzerland’s one Italian-speaking canton, Ticino, died on March 7th.  He was 67.

Italian-speakers make up about 6.5% of Swiss, a country dominated by its two-thirds German-speaking majority but whose federal system dictates a careful balance of power between German-, French-, and Italian-speaking communities.  Most Swiss Italian-speakers live in Ticino, a small Alpine canton which borders Italy’s northern lake district, not far from Milan.  Much of what is now Ticino was part of the Holy Roman Empire’s Duchy of Milan until German-speaking Swiss annexed it in the 15th and 16th centuries.  But it was not until 1803, when Napoleon Bonaparte redrew the borders within and among occupied Switzerland and his northern Italian puppet states that Ticino was given a full federal role in the Swiss Confederation—which it retained in post-Napoleonic Switzerland.  At the same time, Napoleon permanently split the Ticinese apart from their cultural and linguistic cousins of the Cisalpine Republic in what became the northern Alpine reaches of the Kingdom of Italy.  (See a recent article from this blog on other aspect’s of the complicated geopolitics of the Swiss–Italian border.)

Although Francophone separatism in Switzerland is long-standing, Ticinese nationalism owes its emergence to the Lega Nord (Northern League) just over the border, which emerged in the late 1980s to push for greater autonomy, even independence, for the northern third of the Italian Republic, known to its nationalists as Padania.  The Northern League is avowedly xenophobic and right-leaning, as is Bignasca’s Ticino League (as opposed to the more left-wing “soft-nationalist” bioregionalism of Domà Nunch and other groups, which envision Ticino and northern Lombardy merging to form an independent nation called Insubria).

The League of Ticino was founded in 1991 to push for a “no” vote in a looming referendum on Swiss membership in the European Economic Area (E.E.A.), a sort of antechamber to the European Union.  The measure was defeated.  Bignasca and his League campaigned unsuccessfully to keep Switzerland out of the United Nations, which it joined in 2002, but almost single-handedly prevented the Swiss from contributing U.N. peacekeepers.  The pro-Europeanism of Romand nationalists and other Swiss Francophones, as well as the wealthy, and often politically liberal, German-speaking Swiss who like to buy vacation homes in picturesque Ticino were other targets of Ticinese regionalist resentment.

Whatever one thinks of Swiss isolationism, Bignasca’s regional chauvinism had a dark side.  He famously complained of the proliferation of dark-skinned players on Switzerland’s national football (soccer) team and once proposed building a wall between Ticino and Italy.  (For most Swiss, any ethnolinguistic fellow-feeling tends to be overridden by traditional Helvetic xenophobia.)

The League of Ticino in 2011 became the dominant party in the canton.  But the League was Bignasca and Bignasca was the League.  Whether Ticinese nationalism will survive in its current virulent form without its charismatic founder remains to be seen.

[Also, for those who are wondering, yes, this blog is tied in with a forthcoming book, a sort of encyclopedic atlas to be published by Auslander and Fox under the title Let’s Split! A Complete Guide to Separatist Movements, Independence Struggles, Breakaway Republics, Rebel Provinces, Pseudostates, Puppet States, Tribal Fiefdoms, Micronations, and Do-It-Yourself Countries, from Chiapas to Chechnya and Tibet to Texas.  Look for it some time in 2013.  I will be keeping readers posted of further publication news.  (Meanwhile, if you still have money burning a hole in your pocket, an excellent way to support the “Springtime for Nations” blog is by considering donating a volume to the “Springtime of Nations” Research Library via the “Springtime of Nations” Amazon wish list.)]
Posted by Chris Roth at 7:44 AM