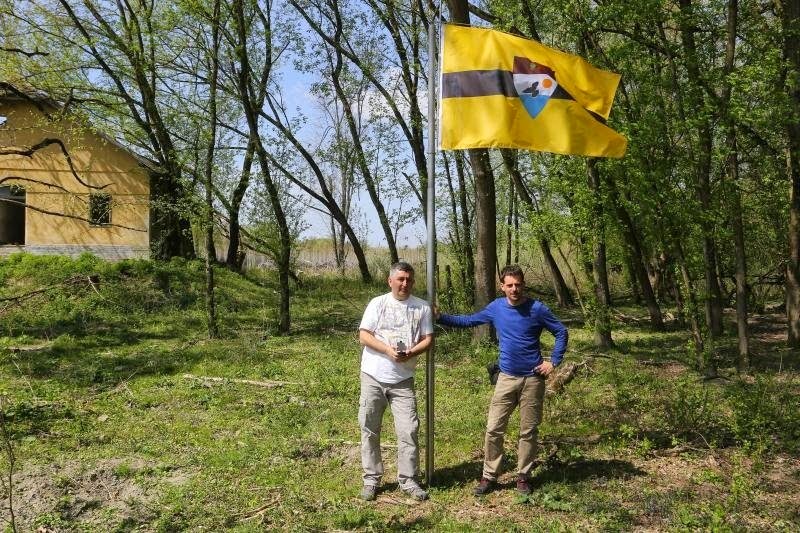 This past week a new nation was declared, on a spot of land in the murkily demarcated border zone in the region of Slavonia where the Republic of Serbia and the Republic of Croatia meet.  But it is not a Serb or Croat behind the project, but a Czech one, and it is more ideological than ethnonationalist. The founder, Vít Jedlička, on April 13th, announced the independence of the Free Republic of Liberland (Svobodná republika Liberland) on a parcel of land on the west bank of the Danube (the mostly Croatian side) around Gornja Siga, an area which is a de facto no-man’s-land since neither side asserts a claim on it.


In 1991, Croatia successfully seceded from the ethnic-Serb-dominated Federal Republic of Yugoslavia, which was subsequently whittled down of all of its peripheral republics until it became simply the rump Republic of Serbia.  Croatia is in the European Union (E.U.), but Serbia is still on a rocky road to normalization with the West.

The self-declared President Jedlička—a 31-year-old local official of the Czech Republic’s marginal, libertarian Free Citizens’ Party (Strana svobodných občanů), which is hostile to Czechs’ membership in the E.U.—admits that there are no “facts on the ground,” as it were, in Gornja Siga itself, only a declaration made from afar.  There was also an impromptu, unauthorized flag-raising on Liberlandic territory.  But although, as Jedlička told Time magazine, “it started a little bit like a protest, ... it’s really turning out to be a real project with real support.”

The three-square-mile statelet is to have no enforced taxation and no military and seems to be modeled on libertarian ideas that would be familiar to, for example, followers of Ron Paul and Rand Paul in the United States.  “The objective of the founders of the new state,” says Jedlička, “is to build a country where honest people can prosper without being oppressed by governments making their lives unpleasant through the burden of unnecessary restrictions and taxes.”  Apparently, there are already 20,000 applications for citizenship, being processed by seven volunteers working around the clock, but Jedlicka plans to cap the on-paper population at 3,000 or 5,000 for the time being. 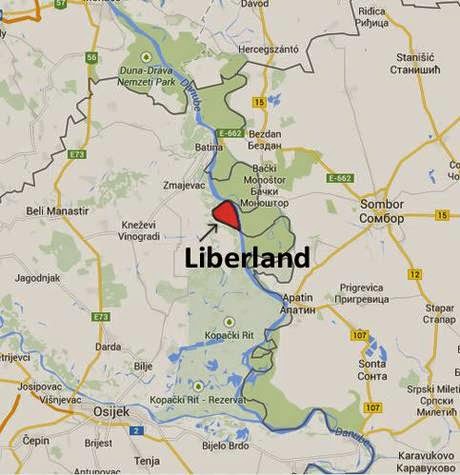 One of the few requirements for citizenship is a lack of a Nazi, Communist, or “extremist” past.  (Presumably, radical anarcho-libertarianism is, for these purposes, not classified as “extremist.”)  It is unclear at this point whether anyone currently lives in the designated territory of Liberland, but aerial photos suggest that it its status as terra nullius is de facto and not just de jure.  The Serbian and Croatian governments have not yet responded to the declaration, though Egypt’s foreign ministry has already warned Egyptians against trying to move there.  Bitcoin, reportedly, is to be the national currency. 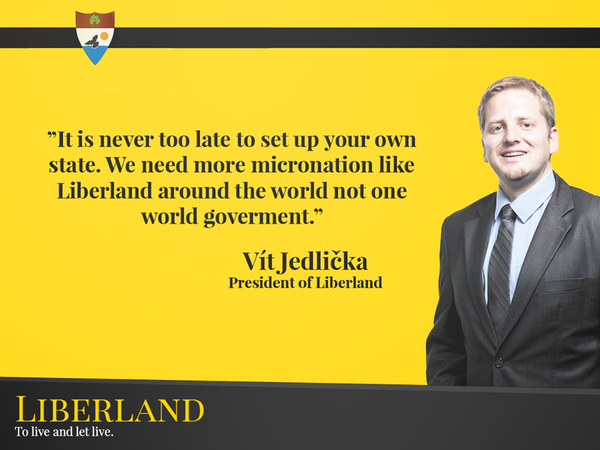 Originally, Jedlička’s idea was borne of frustration at the marginalization of libertarian ideas in the Czech Republic—even though his country is more committed to free-market principles than almost any in the world.  The Free Citizens’ Party has one seat in the mostly powerless European Parliament and none in the Czech legislature.  “I’m still going to be active in Czech politics,” he added.  “I would probably resign and let somebody else run Liberland for me if there was a chance to do political change in the Czech Republic.” 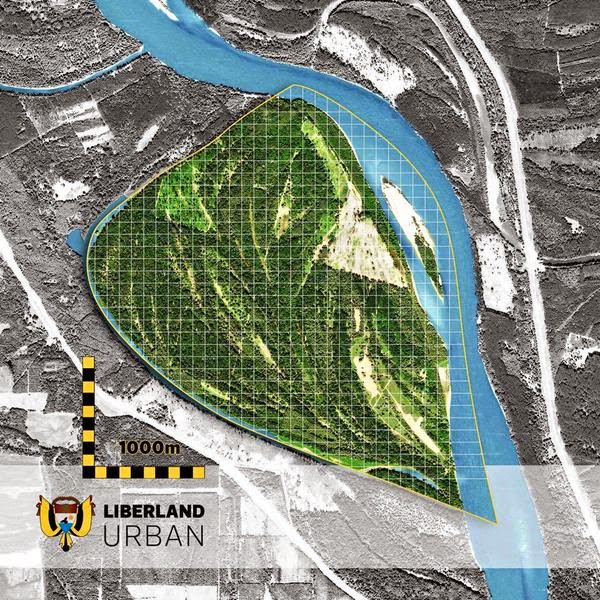 Most high-profile micronations can be found in the English-speaking world (especially Australia, for some reason) and Scandinavia, with some in the rest of western Europe as well.  The Balkans have vanishingly few so far.  But the Czech Republic is no stranger to the phenomenon.  In 1997 a Czech photographer named Tomáš Harabiš founded a Kingdom of Wallachia (Valašské Kralovství) in the republic’s Moravian Wallachia region (not to be confused with Romania’s region of Wallachia), and the noted Czech comic film actor Bolek Polívka was crowned King Boleslav the Gracious (later deposed). There are, on paper, 80,000 “Wallachian” citizens.

It is no accident for the Czech Republic to originate what may yet prove to be the most prominent libertarian micronation movement.  During the Cold War, Czechoslovakia was arguably the most culturally Western-leaning part of the Communist, Soviet-aligned East Bloc, possibly even more than East Germany; Prague, after all, is farther west than Vienna or Berlin.  The country’s leading dissident, Václav Havel, who became president after the 1989 revolution, was an unabashed Americophile, obsessed with the Velvet Underground and Andy Warhol.  His successor, Václav Klaus, was one of the most ardently pro-free-market heads of state—more Thatcherite than Margaret Thatcher herself.  When a dissident-spearheaded set of mild reforms known as “socialism with a human face” (socializmus s ľudskou tvárou) led in 1968 to the brutal Soviet invasion and crackdown known as the Prague Spring, it understandably soured many Czechs on the idea of the mixed-economy social-democratic approach halfway between socialism and capitalism which was the emerging model in western Europe and in places like Poland, where dissent took the form of organized labor.  And, as part of the Austro-Hungarian Empire until 1918, Czechs were influenced by free-market economists such as Austria’s Ludwig von Mises of the Austrian School of economic theory and two Nobel laureates: the Viennese-born Prussian–Bohemian aristocrat Friedrich Hayek and the dwarfish Milton Friedman (author of Free to Choose), who was (like Andy Warhol, funnily enough), the son of immigrants from the old Czechoslovakia’s eastern region of Carpathian Ruthenia (now an increasingly contested part of Ukraine, as discussed elsewhere in this blog).

But Liberland is hardly the first libertarian experiment in the annals of micronationdom.  In the 1970s, a Lithuanian-American real-estate tycoon named Michael J. Oliver attempted to take advantage of the unrest accompanying two separate British colonies’ independence days with libertarian insurrections.  First, in 1973, he played on the fears of black rule on the part of the large white minority on the Abaco Islands portion of the Bahamas to try to declare a separate free-market utopia, with the help of white-supremacist activists and C.I.A.-linked American mercenaries, including Larry Flynt’s alleged personal hired hit-man.  Then, in 1980, as the United Kingdom and France’s shared “condominium” rule came to an end as the New Hebrides, in the South Pacific, became Vanuatu, Oliver tried to piggy-back his cause onto a separatist movement among the cargo cults of the archipelago’s northern Espiritu Santo island, which he wanted to call the Republic of Vemerana.  He even strung the French government along for a while with the idea. Oliver’s most tragicomic attempt at a libertarian state had been in the early 1970s, when he barged tons of sand from Australia to the Minerva Reefs, a set of low seamounts between Fiji and Tonga which did not spend enough of the tidal cycle above water to be classified under international law as “territory.”  But as soon as the island was built up enough to pass legal muster, Taufa’ahau Tupou IV, Tonga’s king, claimed it, sent a naval vessel to eject Oliver and his nascent Republic of Minerva.  (Today, the reefs have eroded away once again to nothingness, but rival claims are still being made by Tonga, Fiji, and one “Prince Calvin,” an American who says he is the “island’s” monarch.)  Oliver’s similar “seasteading” project in Palmyra Atoll, a U.S. territory near Hawai‘i, got even less far.

Another libertarian seasteading pioneer was Werner K. Stiefel, an American drugs mogul who in 1969 tried to start a utopia by fomenting a rebel movement in the uninhabited Prickly Pear Cays during a brief separatist rebellion in the British colony of Anguilla.  After British troops put an end to that, Stiefel tried landfilling to seastead something called “Operation Atlantis” on Silver Shoals, disputed specks of land between Haiti and the Bahamas.  Atlantis was a name for the invisibility-cloaked libertarian refuge in the Rockies in Ayn Rand’s influential 1957 novel Atlas Shrugged.  (For more on seasteading, see articles from this blog on the Principality of Sealand, here and here.)

Similar attempts in the Caribbean were the Wall Street swindler Robert Vesco’s “Sovereign Order of New Aragon” territory, on Barbuda, and the Principality of New Utopia, founded on reefs between the Cayman Islands and Belize in the 1990s by another shady Wall Street type, Howard Turney (using the pseudonym Lazarus Long, borrowed from Robert A. Heinlein’s libertarian sci-fi novels).

Other projects have included, in the 1950s and ’60s, the nation of Taluga (a.k.a. Aphrodite), on the unclaimed Cortes Bank off the coast of Baja California; recent plans to build free-market city-states in Trujillo, Honduras, and on Belle Isle, a park on a riverine island between Detroit, Michigan, and Windsor, Ontario; and a west Texas community called Paulville, after Congressman Ron Paul, though Paul himself wants nothing to do with it.  Even Silicon Valley has (as I’ve written about in this blog) gotten into the act, with plans either to split the region off California as an autonomous state free of government economic regulations or found a free-market “floating city” just outside northern California’s territorial waters to be called Blueseed. 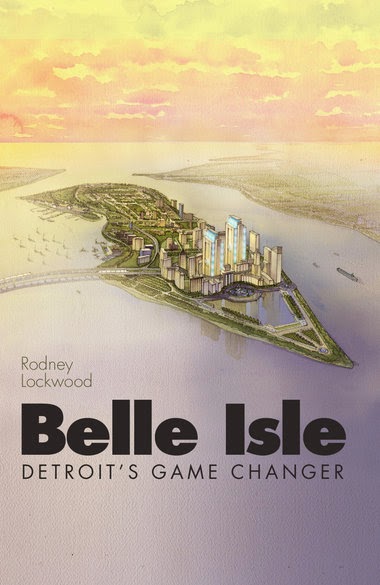 Of all these past attempts, President Jedlička might do well to note the fate of the Republic of Minerva.  He chose the Minerva Reefs because they were pieces of “land” that had fallen between the cracks of two established states, Fiji and Tonga, which were not claiming them.  But then as soon as the project got rolling, the neighbors changed their minds and wanted in on the project.  That ended badly.  Imagine how much uglier it could get if Jedlička not only lost his utopia invaded but found himself literally in the middle of a renewed territorial battle between Serbs and Croats.  Liberland might be in a pretty spot, but it’s one of the most volatile borders in recent history. 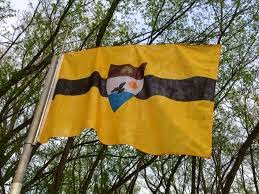 Thanks to Trena Klohe and Alexander Velky for first alerting me to this story.