Remembering Odumegwu Ojukwu: On Biafra and on an African Continent Riven by European Borders Africans are mourning the death last week of Chukwuemeka Odumegwu-Ojukwu, at the age of 78, in a London hospital.  The Igbo leader was president of the Republic of Biafra from its declaration of independence from Nigeria in 1967 until its reabsorption into Nigeria in 1970 after one of the most brutal wars of even that most brutal of centuries, the 20th.  He lived in exile until his return to Nigeria in 1982, dreams of a separate Igbo state by that point having long since withered. 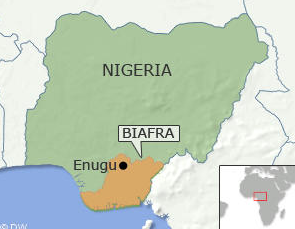 Since there is no current significant Igbo separatist movement, African leaders have felt free to praise Ojukwu as they buried him.  Nigeria is now debating whether to give Odumegwu-Ojukwu, who waged war on the Nigerian state, a state funeral, as many would like—Igbo and non-Igbo alike.  But the Biafran freedom-fighter’s life and death remind us that post-colonial African history has not erased the scars of history left scrawled across it by European cartographers.

Like many African populist leaders of the 1960s, Odumegwu-Ojukwu was bicultural, his biography a mix of African and European cultural influences.  He attended an élite preparatory school in England and earned a degree in history at Oxford University, where, the New York Times notes, classmates recall “he was popular, dressed stylishly, drove a bright red MG sports car, and loved discussions of Machiavelli, Hobbes, Louis XIV, and Shakespeare.”  He was a fluent speaker of English, French, Yoruba, Igbo, and Hausa—though such multilingualism is common in sub-Saharan Africa.  His choice of Sibelius’s “Finlandia” as the Biafran national anthem is the type of factoid that causes more traditionalist African intellectuals to bemoan a version of the Stockholm (or in this case perhaps Helsinki) Syndrome.  But Odumegwu-Ojukwu for a while achieved what almost no African leader has done before or since: replace a European-drawn international border in Africa with an African-drawn one.

As most students of history know, European empires carved up Africa with little regard to the extents and boundaries of the continent’s already existing kingdoms, states, and ethnic territories.  Although the tale that Mt. Kilimanjaro is part of Tanzania rather than Kenya because of a birthday present from Queen Victoria to her cousin, the Kaiser of Germany, is apocryphal, nonetheless the arbitrariness and ridiculousness of many African colonial borders can serve to excuse anyone for believing the story on first hearing. 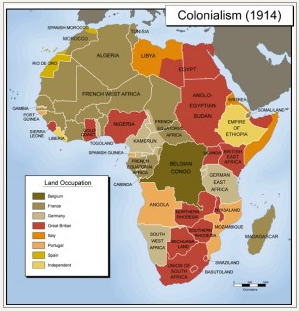 Since the wave of African independence in the early 1960s, numerous secession movements have tried to draw new boundaries, but these nearly always follow half-forgotten lines drawn by the same European cartographers.  When Eritrea split from Ethiopia in 1991, the new border (which separates national groups so sloppily as to cause several costly wars which still have not budged it, incidentally) in a way merely sacralized cease-fire lines negotiated between Winston Churchill and Benito Mussolini.  The Polisario Front’s decades-long struggle against Moroccan kings to establish the Sahrawi Arab Democratic Republic in what was once the Spanish Sahara is in fact a battle to reinscribe a line negotiated between French and Spanish empires.  Namibia’s independence from South African control in 1990 merely restored the old boundary between Deutsch-Südwestafrika and Britain’s Cape Colony.

And most of the separatist movements in Africa today that are having any kind of success get traction from tracing old divisions between European colonies.  Ambazonian and Ambazanian (sic) separatists in Cameroon seek a state using the exact boundaries between English and French zones of occupation in Kamerun after the Germans lost the First World War.  Zambians who want to establish an independent Barotseland draw the lines where British colonizers set apart a special economic zone within Northern Rhodesia.  The Barotses’ brethren just to the west in Namibia would like to establish a new state in the Caprivi Strip, the precise awkward shard of land that Germany purchased from Britain in 1890 as a supply route between South-West Africa and Tanganyika.  Zimbabwe’s Matabeleland separatists argue that they were a separate colony until Cecil Rhodes folded them into Southern Rhodesia on a whim.  And the international community might not tolerate the de facto independence of Somaliland to the extent that they do if it did not draw its border precisely on the old boundary between British and Italian pieces of what is now the dysfunctional Somali Republic. 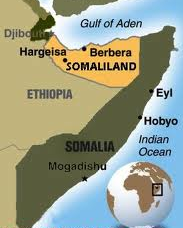 The game-changer in this regard was the birth, in July 2011, of the Republic of South Sudan, comprising the southern, non-Muslim, non-Arab portions of a Republic of Sudan whose boundaries had been drawn by the English.  Sudan’s irreconcilable cultural chasm between north and south was only the most bloodily contested of a whole string of European-designed countries running the length of Africa, where northern Muslims and Arabs are asked to share power with vastly cultural different sub-Saharan peoples to the south.  This has been the cause of brutal conflicts in Chad, Ivory Coast, Morocco, and Mali, to say nothing of Nigeria, which, if it does ever split apart, might well do so with the secession of the increasingly violent Hausa Muslims in the more arid north of the country.

So why did South Sudan get to do what no other African separatists have done—win international (i.e. Western) approval of a separate state using African-drawn divisions between national and ethnic groups?  Well, for one thing it isn’t entirely an African-drawn boundary.  For another, we can thank George W. Bush, who during his presidency stepped up support for South Sudan separatists and arm-twisted Khartoum to accept a referendum on southern independence—since held and implemented under Barack Obama’s sponsorship—mainly as a way to punish an increasingly Islamist state which had long harbored al-Qaeda and its affiliates within its vast borders.  (Remember when Bill Clinton timed the bombing of what turned out to be a pharmaceutical factory in northern Sudan in 1998 so that it would chase Monica Lewinsky’s congressional testimony off the newspapers’ front pages?  Ah, those were simpler times.)  South Sudan, though it had been fighting for a separate state for decades, was hurried along the final, critical stages of the secession process to serve America’s War on Terror.  The demarcation between north and south that the international community agreed upon rather lazily followed a line of demarcation between northern and southern provinces agreed upon when Britain allowed the Anglo-Egyptian Sudan to become the Republic of Sudan in 1956.  And it is South Sudanese themselves—who are now waging battle against better-armed northerners along nearly the entirety of the poorly drawn and cursorily negotiated new boundary—who are paying the price in blood every day. 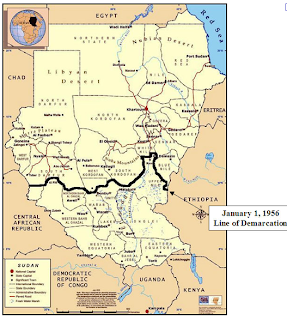 The South Sudan debacle quite rightly worries African leaders who fear that their own violent separatists might be emboldened.  But luckily, even the fanatics of the northern Nigerian Islamist separatist movement Boko Haram know better than to seek Western approval and oversight for their struggle.  They’d rather have no border at all than a Hausa republic whose boundaries are scrawled out in haste by Hillary Rodham Clinton as part of some global chess game.

Africans may not be perfect, and their politics may at times range from the tragic to the absurd, but, as even Chukwuemeka Odumegwu-Ojukwu knew, there is no way they could cock up Africa more than the Europeans have.