Though “Springtime of Nations” is in many ways a news blog, rarely do I present first-person reportage on these pages.  Earlier this month, however, I was an invited speaker at the 3rd PoliNation conference, at the Free Republic of Alcatraz, in the Umbrian mountains of Italy, and was able to witness the signing of a first-of-its-kind environmental treaty by heads of state and other representatives of some of the world’s most high-profile micronations.

Titled the Alcatraz Environmental Treaty of 2015, the document, signed on July 5th, charges that “the large states of the world have been ineffective and their efforts have been lacking in intention and execution concerning efforts to improve the environment, preserve existing natural resources, and reduce carbon emissions to slow the change of the climate.”  Signatories agree to set a global example through responsible ecological stewardship in their own (usually tiny) territories, especially bee populations; to urge the preservation of Antarctica as a nature preserve set aside for scientific research only, even after the expiration of the Antarctic Treaty in 2020; to create “highly localized sub-currencies that will promote the local production and consumption of goods and produce”; to support efforts “to clean the human-generated debris from the oceans and reduce the ‘garbage patches’”; and to financial restructuring to reduce poverty and inequality.

In addition, the treaty demands, “for every square foot of land or glacier lost to melting ice sheets and rising ocean levels, compensation from the large landed nations of one square meter of dry/non-threatened land so that we may relocate the climate refugees that will be created as a result of the rising waters.”  (See my recent article which addresses the issue of the survival of low-elevation nations in a warmer planet with higher sea levels.)  You can read the full text of the treaty here.

Signatories of the treaty are Queen Carolyn of Ladonia; Grand Duke Niels of Flandrensis; President Iacopo Fo of Alcatraz; the Republic of Benny André Lund; Prince Jean-Pierre IV of Aigues-Mortes; Emperor Olivier of Angyalistan; Sogoln Yg Ysca, president of the Institut Fomoire; and a delegation from the otherwise acephalous (leaderless) Bunte Republik Neustadt.  Other nations have since expressed an interest in adding their names to the treaty.

The Royal Republic of Ladonia is a 1-square-kilometer art installation of sorts on the coast of Sweden, founded by Lars Vilks, a Latvian–Swedish avant-garde artist now living an underground, Salman Rushdie–style existence due to being targeted by jihadists for his cartoons of the Prophet Muhammad.  (The apparent oxymoron in Ladonia’s full name is reconciled through their unique form of government, remony (republic + monarchy).

The Grand Duchy of Flandrensis, founded by Niels Vermeersch of Belgium, claims five islands off the coast of Antarctica, arguing that the Antarctic Treaty bars territorial claims by states but not individuals such as soi-disant heads of state. 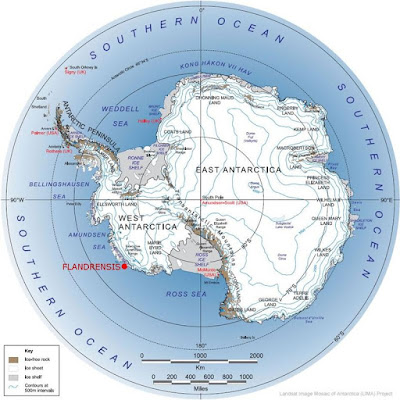 The Republicof (sic; one word) Benny André Lund is a native of Norway, born in 1977, who has styled himself as a sovereign nation of one.  He has changed his name legally to this phrase, including the first name Republicof.

The Principality of Aigues-Mortes is a small town on the coast of France’s Provence region, centered on a Medieval castle, which promotes tourism as well as causes such as sustainability, including through the use of its local currency, the tune, serving a function much like that outlined in the Alcatraz treaty.  One invited speaker, the Belgian journalist Julien Oeuillet, called Aigues-Mortes the world’s most successful micronation.

The Empire of Angyalistan, founded in 1999 and active in environmental causes, is a nation whose territory is the horizon: it is always around us and can never be reached.

The Formori Institute (Institut Fomoire), mostly found in the French-speaking world, is a landless international nation (structured much like a fraternal order) which claims for itself the heritage of the Formori (a.k.a. Fomorians or Fomoire), a legendary race of chthonic demi-gods who were defeated, according to Irish mythology, by the Tuatha Dé Danann, the pantheon of pre-Christian Celtic deities.  (The present writer had the honor of being inducted into the Formori’s House of the Yew.  Contact me privately if you are curious about my name in the (re)constructed Formoric tongue; I am still a novice in Formori protocols and confidentiality.)

The Colorful Republic of Newtown (Bunte Republik Neustadt), in the former East Germany, is a leaderless micronation, much in the style of Copenhagen’s Christiania community, which is the focus of an annual music and cultural festival drawing more than 100,000 people to Dresden’s Neustadt neighborhood, which is where all the funky artist types were living when the Berlin Wall came down in 1989.  It sets itself against the forces of conformity, homogenization, gentrification, and the fragmentation of community in the new Germany.  (I was also made a citizen of the B.R.N., I am proud to say.)

As for the host community of the conference, the Free Republic of Alcatraz (Libera Repubblica di Alcatraz) is an area of private land near Perugia in the stunningly beautiful hills of Italy’s central, landlocked region of Umbria.  It was founded by Jacopo Fo, son of Dario Fo, the Italian winner of the 1997 Nobel Prize for Literature, and a writer and sex guru in his own right.  The Free University of Alcatraz (Libera Università di Alcatraz) has a full calendar of dance workshops, art exhibitions, conferences, music festivals, and other events and also advocates sustainability and strong local community by example.

Other dignitaries at the conference include King Bruno of Noseland, a patch of land surrounded by northern Switzerland’s Canton of Argovia (Aargau), which has its own currency.  Its king is also producer of a documentary about micronations.  One of the conference’s organizers, Emperor George II of Atlantium (a territory surrounded by New South Wales, Australia), was unable to attend, due to illness—to my disappointment, since he has been a supporter of my book Let’s Split! and is helpful to my work in other ways.

Other highlights of the conference included a talk by the Austrian anthropologist Irina Ulrika Andel on the micronation phenomenon; a presentation on the Principality of Outer Baldonia by the Canadian historian Lachlan MacKinnon; presentations by nearly all of the micronations listed above (the playing of the Noselandic national anthem, “sung” through the nose, was a highlight); and an official statement by Queen Carolyn to announce that, contrary to what some sources on the World Wide Web still state, Ladonia is no longer in a state of war with Sweden or any other nation.  (In further state business, Her Majesty sealed a mutual-recognition accord with the Empire of Austenasia at a hastily arranged meeting at Heathrow airport en route back to her home in the United States.)

As Oeuillet, the Belgian journalist (and author of a new book on impostor noblemen), put it at the conference, today’s micronations are conducting private activity using the language and symbols of public institutions, and the best of them are doing things that the recognized public institutions should be doing but aren’t.  When it comes to climate change, maybe these “silly” and “self-styled” monarchs and heads of state can nonetheless help prod the real powers that be to move in the right direction.

In fact, during my stay in Alcatraz, the news came in over the radio that voters in Greece had thumbed their nose at the European Union (E.U.) in general and at Germany’s chancellor, Angela Merkel, in particular by rejecting the austerity measures proposed to help keep Greece in the euro zone.  In jubilant celebration, Alcatraz’s queen, Eleonora Albanese, passed out grappa for everyone.  Not, of course, because a “Grexit” would necessarily be the best thing or because anyone knows which course might be best for the people of Greece and the rest of southern Europe—but most of all, I gather, because, in geopolitics, Going Big isn’t working, and something has to give.

[You can read more about Atlantium, Ladonia, and many other separatist and new-nation movements, both famous and obscure, in my new book, a sort of encyclopedic atlas just published by Litwin Books under the title Let’s Split! A Complete Guide to Separatist Movements and Aspirant Nations, from Abkhazia to Zanzibar.  The book, which contains 46 maps and 554 flags (or, more accurately, 554 flag images), is available for order now on Amazon.  Meanwhile, please “like” the book (even if you haven’t read it yet) on Facebook and see this interview for more information on the book.]