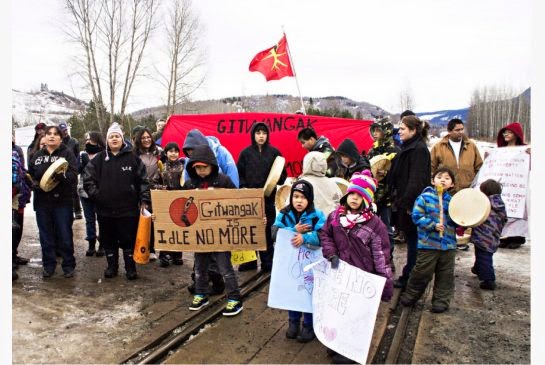 Yesterday, July 20th, was the 143rd anniversary of British Columbia’s confederation—i.e., when it ceased to be a colony of the United Kingdom and became a member of the then-four-year-old independent Dominion of Canada.  But celebration by some Canadians in one vast territory in the northern interior of the province was muted.  For it was also the ninth day of a countdown to August 4th under the terms of an indigenous “eviction notice” that challenges the legitimacy of settler rule in B.C.  For it was on July 10th that the hereditary chiefs of two tribal villages of the Gitxsan nation, Gitwanga (a.k.a. Kitwanga) and Gitsegukla, gave notice to Canadian National Railway (C.N.) and individuals and institutions representing the sport fishing and timber industries.  The notice, issued by the Gitxsan Treaty Society in Hazelton, B.C. (even though there is no Gitxsan treaty and many Gitxsan don’t want one; more on this below), states that it covers all of the approximately 33,000 square kilometers of northern B.C. territory belonging to the land-holding leaders of the several dozen extended matrilineal families (“houses”—similar to European noble houses) that make up the Gitxsan nation.  It states, in part, “This eviction notice affects all sports fisheries on the Skeena River and tributaries, all forest activities … and C.N. Rail.  All are expected to vacate and cease activities on Aug. 4, 2014, until both Crowns [i.e. the provincial and federal governments] have obtained the required consent of the Gitxsan Hereditary Chiefs.” 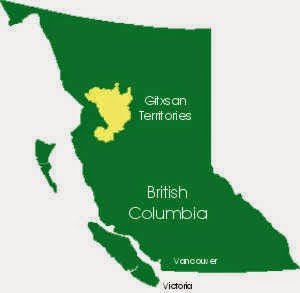 The Gitxsan chiefs are using centuries of legal precedent.  This includes not only the millennia of Gitxsan law strictly governing the use of family-owned territories—the Gitxsan ayookw—but also a series of Canadian legal decisions which recognize Gitxsan law.  In the Royal Proclamation of 1763, King George III (yes, the same chap who later got so grumpy about surrendering certain other North American territories) affirmed that no scrap of Indian land can come under the rule of the Crown without treaty—and yet in only a few remote corners of B.C. were any treaties ever signed.  Then, Delgamuukw vs. the Queen, a massive lawsuit against the federal and provincial governments brought in the late 1980s by the Gitxsan (the spelling Gitksan was preferred in those days) and a neighboring nation which speaks an unrelated language but exercises an interlocking system of land tenure, the Wet’suwet’en, was struck down in an openly racist court ruling but then partly upheld in an appeal a few years later in a decision that recognized that aboriginal title did exist and that mostly oral traditions such as those of the Gitxsan and Wet’suwet’en could constitute title.  It left open what the nature of such title was, let alone its implications.

A 2004 ruling in a case brought by the Haida people of northwestern B.C., Haida Nation v. Minister of Forests (B.C.), laid out a stricter process for consulting in land use than the de facto system of “‘consult’ with tribes, then do what you want anyway” under which government and industries have mostly operated in the treatyless lands.  Earlier this year, a case involving the south-central B.C. Tsihlqot’in (a.k.a. Chilcotin) nation, Tsihlqot’in Nation v. B.C., reaffirmed the Delgamuukw 1997 appeal decision in more concrete terms and recognized a governmental-type role for First Nations on equal par with, and in some respects above, the Crown. 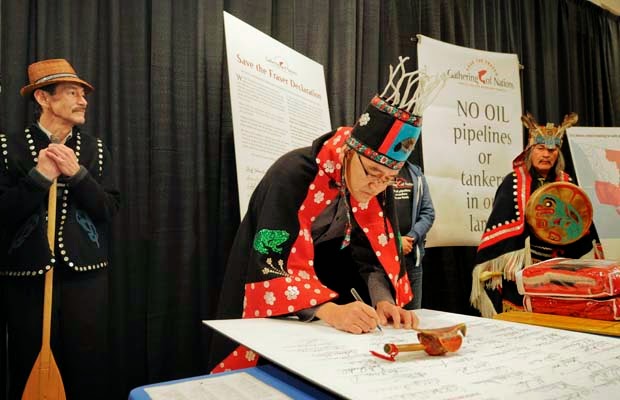 As Vernon Smith, who holds the Gitxsan hereditary title Sagum Higookw, pointed out, “In line with our ayookw, the Supreme Court of Canada says repelling trespassers is a necessary element of our title.”  And, as Beverley Clifton Percival,* a negotiator who holds the hereditary title Gwaans from Gitsegukla’s House of Hanamuuxw, said, “There is no legislative authority for these government bureaucrats to make determinations regarding Gitxsan strength of title and rights.  Without the consent by the Gitxsan Hereditary Chiefs, they are trespassers.”

Clifton Percival also told media that the specific land dispute which brought about the eviction notice involves territories claimed by Gitxsan houses which are being treated in Crown negotations as territory of the Kitselas (Gits’ilaasü) and Kitsumkalum (Gitsmgeelm),** two tribal villages downriver which are part of the linguistically and culturally related Tsimshian (Ts’msyeen) nation.  She added, “We want the Gitxsan lands taken out of the offer, that’s the only part we’re interested in; we also want to achieve reconciliation with the crown of Canada and British Columbia, and we want to have a good legal relationship that moves us all forward in a positive way in the creation of a sustainable economy here in the northwest that allows people to benefit, and as well we have an economic component to our title, so any revenues that are generated on our lands, we’re entitled to that.”

Art Mathews, who holds the chiefly title Tenimgyet from Gitwangak, added, “The Crown has never been honourable in their engagement with the Gitksan since 1997.  Harvesters of trees and fish are now evicted.”

Al Wilson of the B.C. Wildlife Federation acknowledges that the Tsihlq’otin ruling is still so recent that no one has really grasped its full implications, which are immense. “Clearly,” Martin said, “government is trying to get their mind around that [court decision].  It’s early days.  It’s clear there is a lot of work to be done to figure out the implications of this as you translate from the judgment level of the Supreme Court to how things will actually work across landscapes and watersheds and how it will affect the use of resources, including fish and wildlife.”  The Gitxsan eviction notice accelerates mightily the timetable under which the implications of the decision will need to be sorted out.

But these latest developments have a much larger context as well.  The Northern Gateway Pipeline being planned by Enbridge, Inc., to run from Alberta’s tar sands to the small northern-B.C. harbor city of Kitimat, in the Haisla nation’s territory, would run through a snippet of Gitxsan territory—and, as discussed earlier in this blog, a significant part of Wet’suwet’en lands as well.  Numerous First Nations along the route have organized against the pipeline, which they see as not just an environmental but an existential threat, and the movement has galvanized indigenous communities throughout Canada and the United States under the catch phrase “Idle No More”—evoking the image of a sleeping giant being stirred to action by a further atrocity.

Nathan Cullen, the New Democratic Party’s member of parliament (M.P.) for the area, has pleaded for calm.  Meanwhile, the squatters have till August 4th to clear off.  I have a feeling they won’t, and that the struggle for the land will enter a new chapter.  Watch this space. 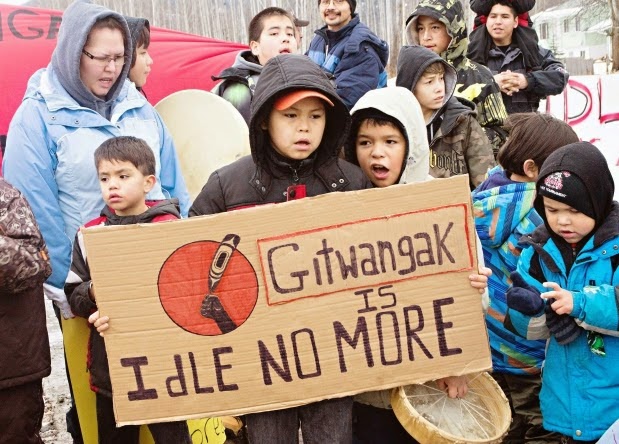 [You can read more about the Tsimshian, Gitxsan, Nisga’a, etc., as well as sovereignty and independence movements both famous and obscure, in my new book, a sort of encyclopedic atlas just published by Litwin Books under the title Let’s Split! A Complete Guide to Separatist Movements and Aspirant Nations, from Abkhazia to Zanzibar.  The book, which contains 46 maps and 554 flags (or, more accurately, 554 flag images), is available for order now on Amazon.  Meanwhile, please “like” the book (even if you haven’t read it yet) on Facebook and see this interview for more information on the book.]

Related: hear the author of this blog discuss the Cascadia independence movement in Oregon, Washington, and British Columbia in a recent interview for Seattle’s N.P.R. affiliate station KUOW-FM.  Click here to listen.

* Full disclosure: Ms. Percival was a graduate student of mine some years ago at the University of Northern British Columbia’s Terrace campus, though I think I learned at least as much from her as she did from me.

** More full disclosure: I have worked very closely with the Kitsumkalum and Kitselas communities, and in particular with hereditary chiefs and treaty negotiators of the Kitsumkalum community.  I myself take no personal position in any territorial dispute; my work there has not focused on territorial questions but on other governance issues such as membership policy.
Posted by Chris Roth at 5:50 PM